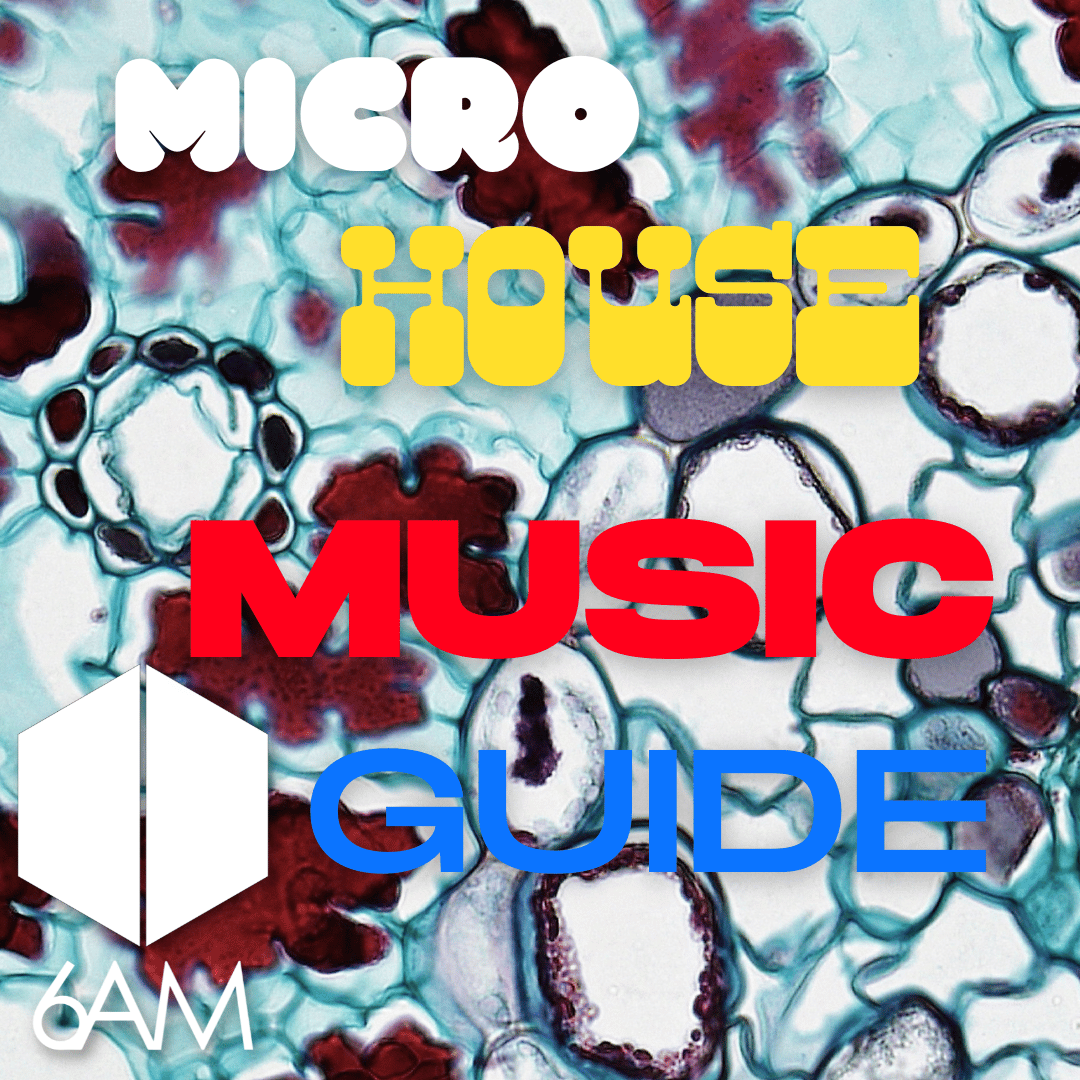 Microhouse. The minimal, clicky, poppy, fun, yet sometimes melancholic and dark subgenre of house music that has been around since the late 90s is on the chopping block today. We’ll dive into the wide spectrum of this sound and touch on the history, artists, and nuances surrounding it. From the organ stabs, chopped glitchy vocals, leads, techno repetitiveness, or erie string pads we got you covered at 6AM.

Microhouse is something like taking Chicago House and reducing it down, chopping it up, and adding in some techno flavor.  The minimalism is what this subgenre is known for. The average BPM is about 115-130 with a 4/4 back beat. Drums are groovy and kept clean, and almost always you’ll be able to detect your famous 707, 808, and 909 percussion sounds featured throughout the track. Hypnotizing, sometimes polyrhythmic percussion with a repetitiveness that pays homage to the early days of techno is present, while the glitchy, choppy vocals and leads aid to the clicks, cuts and groove the genre is known for. Producers experiment with layered samples  sometimes with white noise or static to achieve that textured spacey feel.  Elements of bitpop(8 bit, chiptune sounds) and garage(especially with the punchy drums) can be heard throughout accompanied by dream-like synths and synthetic strings . Styles of this sound range from a gospel, soulful feel of Chicago House to a underground darker, spooky, almost under worldly sound.

The term “microhouse” gets its roots back in July of  2001 when music journalist and DJ, Philip Sherburne, released an article for the magazine The Wire. He was using this term to describe the interpretations of Chicago style grooves that were being released at the turn of the millennium. Labels such as Perlon, Kompakt, Playhouse, Ongaku, Klang Elektronik, Force Tracks, and Force Inc. were pioneering this new sound, fusing sounds from the 80s and 90s to create something new.

Though the term was coined in 2001 microhouse the lineage can be heard as early as 1993 as the  German group, Oval, was experimenting with writing on cds and resampling the edits.

Perlon’s Superlongevity Compilation, released in 1999, also is a good example of the further developing sound. You really start to get the essence of microhouse that stands the test of time through today. The drums are kept groovy with techno style washed out sounds filtered in and out to add to the hypnotizing style and repetitive that drives the track along.

The minimalism and space that hypnotizes the listener and leaves them in a groovy trance is fully on display. This is what the microhouse community is drawn to, and obsesses over. The community surrounding this sound is unique, tight knitted, and holds their taste as the cream of the crop of dance music. You can get a very good sense of the love and appreciation the listeners and party goers have for the artists involved just by checking out some sets on youtube and watching the reactions of the attending crowd.

Here are a few artists that have been around for years in the microhouse scene, traveling all over the world continually bringing the proper sounds and atmosphere to the party.

Chilean- German producer and DJ, Ricardo Villalobos, got his start in music at a young age. Now regarded as one of the most renowned European DJs the allure around him based on is purely based on his dedication and love for the music. Drawing inspiration from Depeche Mode, Daniel Miller, and rhythmic South American music, Ricardo released his first record in 1994 on the German label, Playhouse. 4 years later he began to DJ professionally. The famous Pete Tong of BBC Radio said this before playing Ricardo’s set on his radio show(check it out below) ” One of electronic music’s living legends…he’s truly a pioneer of stripped back techno and microhouse music. As a selector he’s one of the best, a magician behind the decks and totally dedicated to the craft of DJing…”

Thomas Franzmann, aka Zip, aka Dimbiman is a world renowned DJ and producer asscociated with the minimal microhouse music scene. Starting as a singer in 1986 he bounced from different bands for about a decade before co-founding the record label Perlon. Big names like Derrick Carter and Fatboy Slim have remixed his tracks and he participates in the Narod Niki Project with Ricardo Villalobos and Richie Hawtin. Zip holds residencies at famous clubs like Robert Johnson and Panorama Bar. Zip is a major pillar and favorite amongst the community.
Zip “Sunwave 25”

Discovering his love for electronic music at age 16, Francesco Del Garda, is now a major name and must see for all minimal fans. Del Garda has only released a handful of tracks, but is an avid record digger and has an enormous bag to pull from. The Timeless Label boss’s approach to his craft has taken all over the world as he continues to deliver on a regular basis.

Swedish artist, Sonja Moonear, has a career spanning 25 years. She consistently has her on huge festival lineups and clubs all around, usually side by side with one of the other top contenders on this list. Sonja has a live DJ project called, Junction SM, alongside Dandy Jack. Consisting of live sets and DJ sessions that last hours. Aside from being an active DJ and producer Sonja works as a sound designer for Swiss-French TV TSR.

Romanian artist, Raresh, has gained a massive following over the years. Appearing behind the decks at major clubs and festivals around the world. When he was 15 years old he started spinning records at a small club in Romania. Fast forward to 2007 he launched the label [a:rpia:r] with fellow DJs, Rhadoo and Pedro, which has been a major success. In 2012 he grouped with his friend and fellow DJ, Praslea, to form “Pralesh”. Together they have released an EP entitled “Out of Time”.

Frenchman, Romain Poncet, aka Traumer,  is another DJ/producer delivering on a regular basis for the scene. With notable releases of house and techno it is no surprise his sets are highly sought after. Artists like Laurent Garnier and Stephan Bodzin have co-signed Traumer, and he has released tracks under their label. Traumer is a little younger than the aforementioned, but his dedication and love for music ensures that he will be around for a long time.

Young Australian DJ/producer, Mall Grab, has bursted onto the scene over the last 6 years. With multiple catchy club bangers, continued sold out parties, a strong team (Steel City Dance Discs Crew), and his own record label called Looking For Trouble he has really gained massive traction in a short period of time. Mall grab pushes the minimal sound in a more LOFI direction with more moody leads and pads that emit huge emotion. Look out for Mall Grab as he continues to mature and grow his sound.

The occult following is very real with microhouse, people travel all over the world to follow these artists holding their taste very high on the totem pole. This is what creates the amazing community surround this sound. Traveling all over the world for years these artists build and bring together people from all walks of life into a family that continues to support. These giants show no signs of slowing down and the sound itself continues to be pushed by a younger generation of producers and DJs who are infatuated with the selection, skill and effortlessness these almost mythical creatures move with. Stay tuned in with us at  6AM to stay current on all things electronic music industry