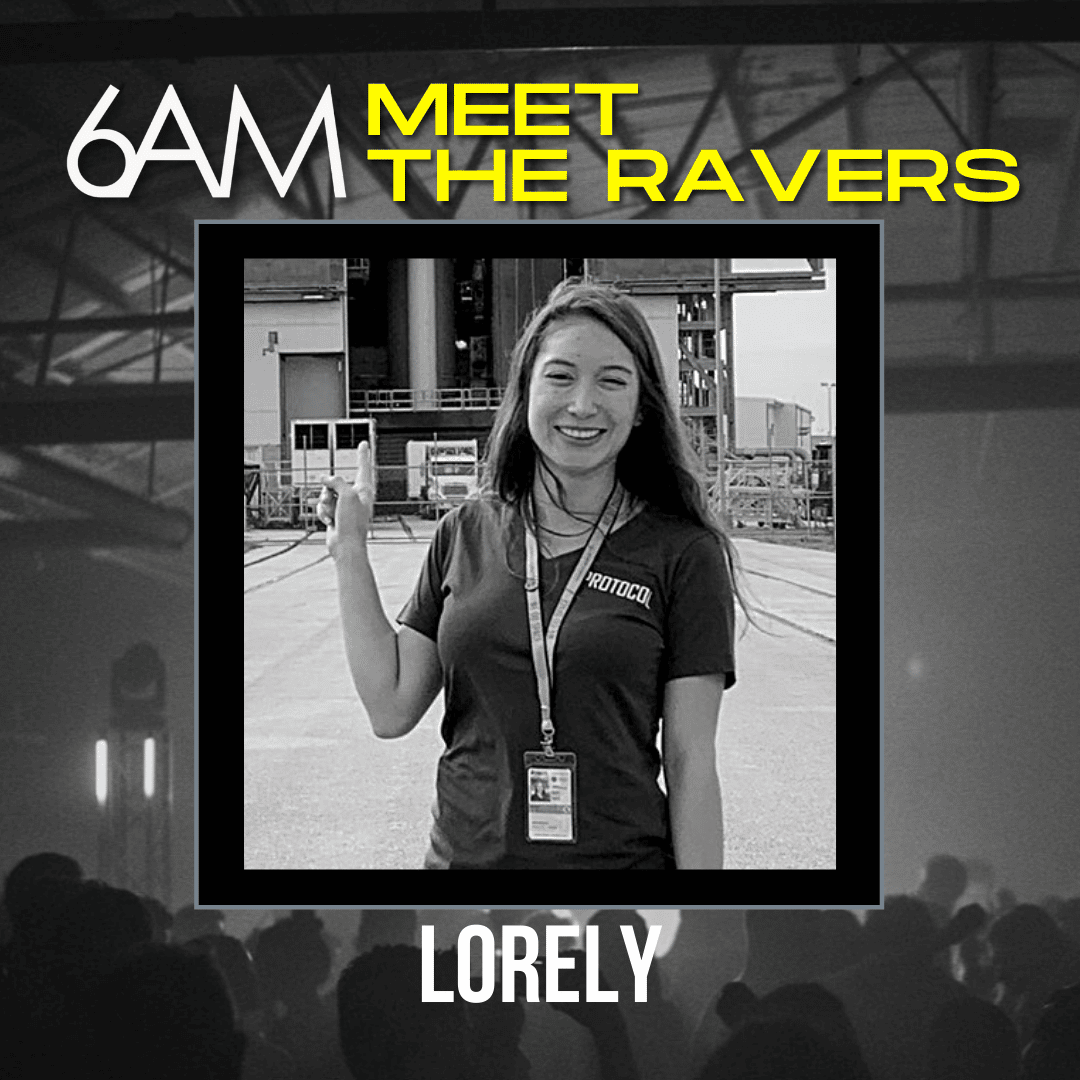 One of the best parts about a rave is its anonymity. It’s a sacred space without status symbols. It’s you, the music, and other ravers. The only expectation is that you treat others with love and respect, and hopefully enjoy the music. Safe to say you’ve probably wondered who’s dancing next to you. What’s their name? What do they do? Let’s ask! Meet Lorely, part-time raver and full-time NASA Liaison at Lockheed Martin Space.

Talk to us about what you do when you’re not on the dance floor. What does your life look like outside of the rave?

I work in the space industry doing logistics for launches for satellites and spacecrafts. Also, I recently joined a team where I help implement advanced technologies in the organization and showcase visualizations with augmented reality of our innovations to our customers and stakeholders. Additionally to launches and operating technologies, I will join the interactive media where I will do sound design for immersive experiences and videos at Lockheed Martin Space.

Space has been my passion since a child. I know it sounds overrated, but I wanted to be an astronaut and being from Mexico that dream became very poor. When I moved to the USA, opportunities were unlimited. So besides doing music and working in space I’m also part of the Board at Space Generation Advisory Council (SGAC) by the United Nations as Financial Controller. Part of the Next Generation in Space Council and World Space Week Association. I will always promote STEM education and knowledge in space through any of my platforms. I am working on my second bachelor’s degree. This one is in Sound Engineering.

How old were you when you first heard about electronic music?

I heard electronic music since I was very young. My uncle used to babysit me, and he would always be playing Sasha, Chemical Brothers, etc., in the house and car. I had no idea what I was listening to, but I would move my body with the beat. When I got older, I finally understood the essence of the music.

“The first time I heard techno I just fell in love.”

Lorely on what drew her to electronic music.

Was there a strong house and techno scene where you grew up? If not, how did you stumble upon this community?

I am from Ciudad Juarez, Mexico, and underground electronic music has been in previous generations thanks to a couple of collectives. I believe we were one of the few cities in the country to have actual headliners and people actually understanding the music. For me, I will be forever thankful to Hardpop Club in Ciudad Juarez. They shaped my sound by bringing different artists from techno, progressive, house, deep house, etc., and that help us get on the same page as in Europe but on the other side of the world.

It gave us hope and it made us forget all the bad happening outside in the war. For that reason, this club is considered one of the most important in Mexico and an iconic club in the world.

Moreover, Hardpop not only taught us many things in the underground scene but it became the temple where you could come and leave your ego and problems at the door. It became a refuge for all of us when Juarez used to be the most dangerous city in the world. It gave us hope and it made us forget all the bad happening outside in the war. For that reason, this club is considered one of the most important in Mexico and an iconic club in the world.

During the war all clubs closed, restaurants, stores, and sometimes schools, Hardpop was the only place that stood alive and gave us a home where we could escape from “reality.” Growing up in this scenario made me appreciate and have more love for the music and the culture that techno offers.

“Being on the dancefloor dancing with people that you don’t know but without words you can connect is the best part of it.”

Lorely on why she keeps coming back to the dancefloor.

What drew you to electronic music?

The sound. The first time I heard techno I just fell in love. I used to hear classic rock and metal and had always been so attracted to the bass, but when I discovered techno at the age of 16 at Hardpop Club (using a fake ID to enter) I was blown away.

I felt like my entire life I was missing something and finally found it. I changed my music taste that same night, and my friends changed because this was still something “bad” to listen to in my surroundings (people only thinking about drugs) and I literally went to that club every weekend until I moved to Berlin.

For you, what is it about the dancefloor that keeps you coming back?

The people. Being on the dancefloor dancing with people that you don’t know but without words, you can connect is the best part of it. Being in the DJ Booth is the same, what keeps me coming back to play is the connection to the crowd.

Read More: A History of the Second Wave of the Rave Scene

Do you usually go to shows solo or with friends? If you go with friends, would you ever go solo?

When I started raving, I would not care and go solo. My admiration for the music was so great that I wouldn’t care if no one wanted to go with me. After all, I feel safe in this environment. Now, I have friends that like and enjoy the music as I do.

What’s one thing you’ve learned from the rave scene?

This is difficult to describe because I truly believe the raving scene shaped who I am today. The culture that comes along is very welcoming, respectful, revolutionary. The raving scene opened my eyes and my mind in so many different ways that for someone coming from a very conservative country would ever find these teachings here. I can see how different I am, in terms of values and customs, from friends that don’t rave. I believe, it made me a more progressive person.

Love and techno for all!