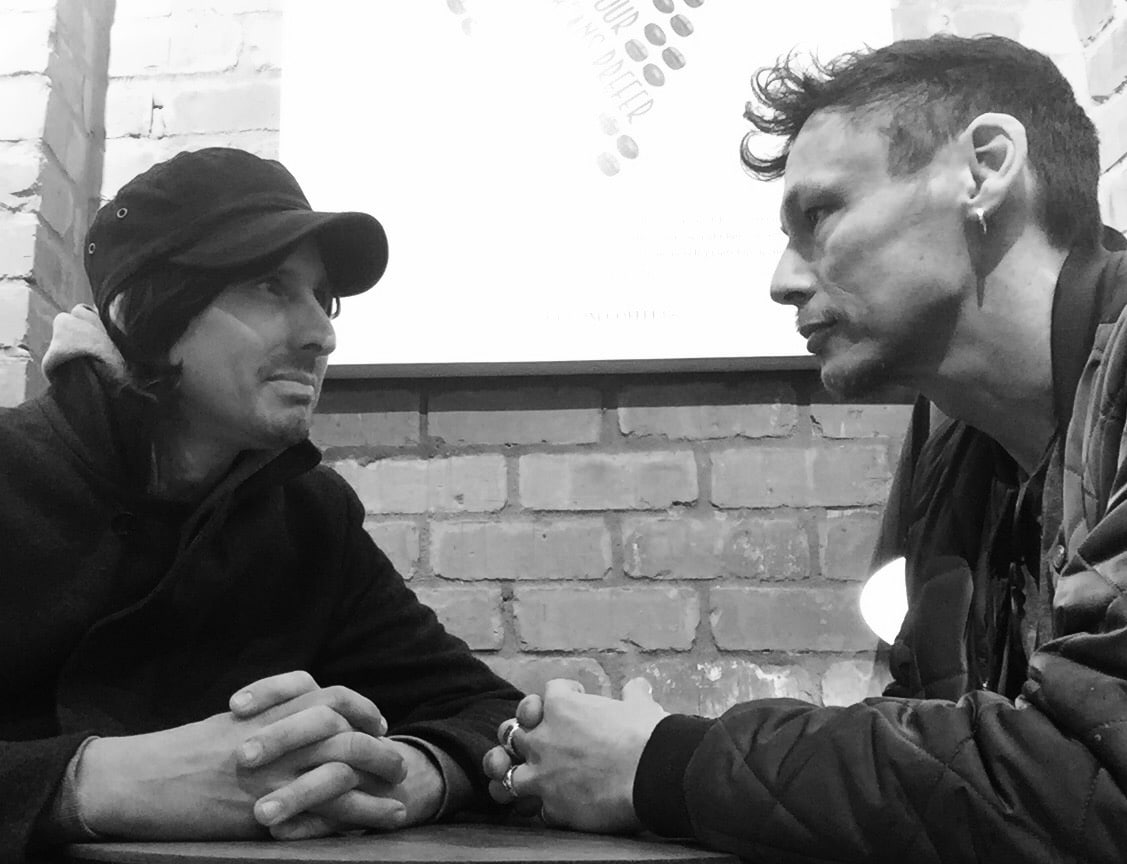 Luke Slater and Ø [Phase] combine for the second release under their RoogUnit guise on Mote-Evolver this April with the ‘Nu Rebels Club’ EP.

Following 2017s ‘Mesh’ EP release, the second outing from two of techno’s most revered talents in Mote-Evolver boss Slater and Ashley Burchett (Ø [Phase]), sees the duo indulge in a vast sonic exploration into the world of hypnotic techno shot through with intricately interwoven soundscapes and glacial atmospheres. 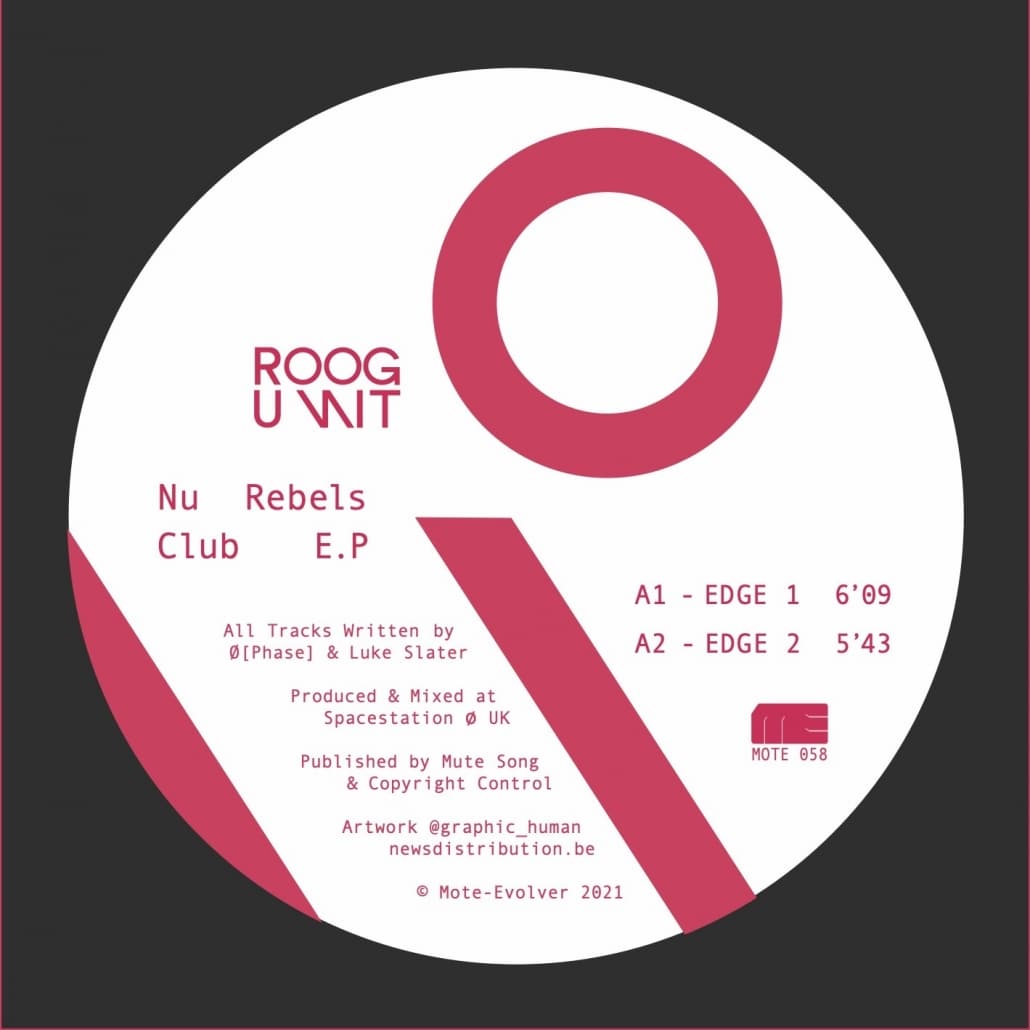 When techno crossed the Atlantic and made its way to the UK it was embraced, further pioneered and expanded upon by a few key artists. One of them most notably being Luke Slater who is one of techno’s most chameleonic enigmas – shifting through the variants of the genre with euphoric clarity.

From his beginnings as a resident at Heaven’s Soundshaft night Troll in London in 1989 and his involvement in the early outdoor rave scene, Luke’s been responsible for some of the most celebrated and richly textured techno of the 90s and he quickly became one of Britain’s emerging talents with seminal releases on Peacefrog, NovaMute and Djax-Up-Beats.

From his beginnings as a resident at Heaven’s Soundshaft night Troll in London in 1989 and his involvement in the early outdoor rave scene, Luke’s been responsible for some of the most celebrated and richly textured techno of the 90s and he quickly became one of Britain’s emerging talents with seminal releases on Peacefrog, NovaMute and Djax-Up-Beats. Over the succeeding years, his many forms and guises unravelled, releasing an array of music under his L.B. Dub Corp, Planetary Assault Systems and The 7th Plain projects for the likes of Ostgut Ton and his own Mote-Evolver imprint – not to forget numerous leftfield excursions under various other monikers and countless remixes including Depeche Mode, Madonna, Octave One, Joey Beltram and Kenny Larkin.

His rich, full sound became as evident in his productions as they did in his mixing where he showcased his ability to chop up, blend, and rework his Detroit influenced roots with contemporary sounds that transpired throughout the ages. Over the past three decades, Slater’s sound has been honed across the globe several times over which boasts residencies at the likes of Berghain alongside appearances at about every major club or festival you could think of – from the Dutch forest settings of Dekmantel to the incredible setting of Fuji Rock Festival in Japan.

In the latest aeon of his career, Slater has channelled fresh energies into projects old and new. The revival of some of his most notable aliases has found much acclaim in the form of multiple albums, EPs and remixes. Collaborations such as Egopoint, where the choreography of Staatsballett Berlin’s first solo dancer accompanied a composition by The 7th Plain, found him on the fringes of experimentation. Whilst newfound concepts such as the live performing project LSD (a collaboration between Dave Sumner [Function], Steve Bicknell and himself) has captured the imagination of fans past and present.

2020 released ‘Berghain Fünfzehn’ album is yet another example that proofs Luke’s absolute craftsmanship while still being on the forefront of electronic music. It forges new compositions by chopping, looping tweaking and deploying sounds from the Ostgut Ton back catalogue and stands as a testament to the unquestionable creative forces that power the mind, body and soul of Luke Slater. From here, the enigma shall continue to unravel as he cements his legacy within contemporary electronic music.

Since the late 1990’s Ø [Phase] has been part of the UK Techno scene. The London based producer whose style ranges from gritty Minimal Techno to Detroit influenced material is best known by his work on Token Records. Originally a mastering engineer, he began producing as a sideline, releasing his debut “Module Overload” on Steve Bicknell’s Lost/Cosmic records in 2000. This was followed by a string of productions for London’s Surface/Inceptive Records and Ben Sims’ Ingoma imprint, all of which saw consistent support throughout the techno community.

He started working with Token in 2007, and his music progressively earned more and more worldwide recognition – significantly on 2012′s much acclaimed “Binary Opposition” single and subsequently on his 2013 debut LP ‘Frames of Reference’. Regular appearances at the world renowned Berghain in Berlin, REX (Paris), FUSE club (Brussels) and Lux (Lisbon) (amongst others) along with remixes for the likes of Planetary Assault Systems, Robert Hood and Marcel Dettmann confirmed Ø [Phase]’s music beyond doubt as a relevant voice within the genre.

Since then, Ø [Phase] has gone on to release his second album ‘Alone In Time?’ in 2015 and ‘Before This’ in early 2021, the latter of which debuted on his newly-launched Modwerks imprint..