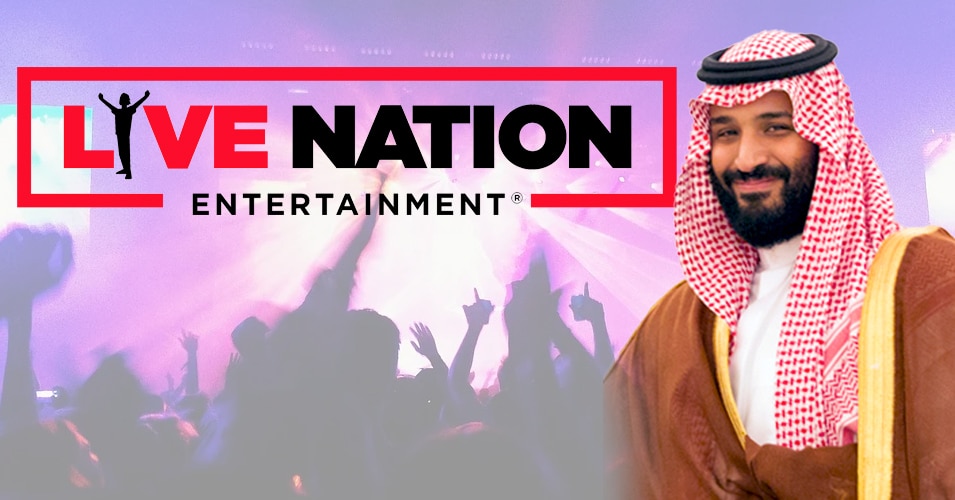 This month’s most-talked-about music business news was certainly the $500 million purchase of a 5.7% stake in Live Nation by the Saudi Arabian Public Investment Fund (PIF) on Monday, April 27th. It has been impossible to not raise an eyebrow over the Live Nation stock purchase, considering just how much the entertainment industry has shunned Saudi Arabia since the murder of journalist Jamal Khashoggi at the Saudi consulate in Istanbul last October.

The gruesome murder was allegedly ordered by Saudi Prince Mohammed bin Salman, according to reports by U.S. and Turkish intelligence agencies — charges that Salman denied. The murder led Endeavor chairman Ari Emanuel to cancel a $400 million investment into his talent agency and content company and caused many in Hollywood to sour on the prince who had billed himself as a reformer in the powerful Arab country.

Billboard reports: “The 12.5 million shares of Live Nation common stock were purchased by Saudi Arabia on the open market for approximately $500 million — the money doesn’t go to Live Nation as an investment but is exchanged with shareholders selling their stakes. The purchase is seen as a long-term play by the Saudis, boosting the shares of the company 10% to close at $42.01 on Monday.”

Women were banned from driving in Saudi Arabia all the way up until 2019. Last summer, Saudi Arabia finally gave women the right to register births and to be issued official family documents. Yet, women still need the permission of a male relative to live on their own or to exit a domestic abuse shelter, and women can’t pass on citizenship to their children. It must also be noted that LGBT rights are still completely nonexistent in the country — same sex relations are a crime in Saudi Arabia, and can be punishable by death.

In response to the criticism from these policies, Saudi Arabia has been trying to use entertainment and influencers to market the kingdom and boost tourism. A few months ago, the country revamped its visa program to make it more attractive for tourists, which is around the time sponsored Instagram posts started increasing in frequency. The new changes allow visas for non-religious tourists and allows female tourists to not wearing a traditional abaya robe, although “modest clothing” is still required and will be enforced.

In the past musicians have been criticized for accepting bookings in Saudi Arabia, while others took a hard stance against the practice. In January of 2019, Mariah Carey, DJ Tiesto and Sean Paul were heavily criticised by some for agreeing to play in Saudi Arabia, a nation with a poor record when it comes to civil and in particular, women’s rights. Carey’s publicists at the time told the Associated Press that, when “presented with the offer to perform for an international and mixed gender audience in Saudi Arabia, Mariah accepted the opportunity as a positive step towards the dissolution of gender segregation.”

As electronic music DJs performed and influencers promoted the festival, they all seemed to ignore the human rights violations of a country now too desperate to change their image to the world without actually taking the necessary steps to put a stop to the actions they are so heavily criticized for.

This boycott movement hasn’t been singular to Saudi Arabia at all. Israel has been the focal point of very loud calls for artist boycotts, with musicians taking a stance for Palestine by refusing to play in Israel and calling for their peers to do the same. Lorde was forced to cancel gigs in Israel, but back in 2017 Radiohead made no such decision. Here, as is reported, the iconic band felt it natural to go to Israel and play their songs. At the time, lead singer Thom Yorke responded in a statement: “Playing in a country isn’t the same as endorsing its government”.

Yet, it is in the electronic music world, and the underground techno and house industry in particular, that we have seen a very active movement to boycott shows in Israel in particular. Resident Advisor reported in Sept of 2018 how “artists such as Ben UFO, The Black Madonna and the Discwoman collective have tweeted #DJsForPalestine in support of a cultural boycott of Israel.” These artists weren’t alone, and the sentiment was united: they were boycotting any and all gigs in Israel in support of Palestine, with some such as Ben UFO going so far as to specify that they would do the same in other countries with comparable situations.

So, what gives when it comes to Saudi Arabia, and what does it mean now that the Saudi Arabian Public Investment Fund has taken ownership in Live Nation, with possible plans to expand their stake percentage?

Right now Live Nation has shut down all of their event operations throughout most of the world due to the COVID-19 pandemic but is expected to start up operations once given the green light to do so. While this article isn’t a call for a boycott on Live Nation events, the situation does raise concerns and poses some serious questions for artists who have taken vocal and emphatic stances against human right violations, especially when it comes to women’s and LGBTQ rights.

Will those artists and DJs who made a vocal stance against human right violations and other social justice issues refuse to perform Live Nation events and venues?

If not, why and what will that say about their integrity?