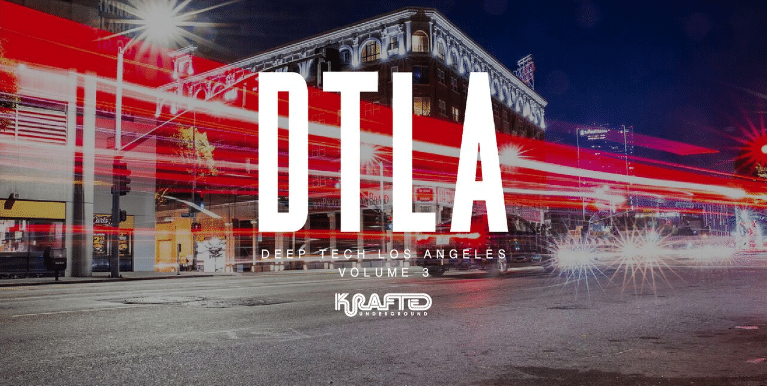 The metamorphism continues in downtown Los Angeles – from an underdeveloped urban landscape to a thriving metropolis with a flourishing underground music scene.

Arising from this transformation is Deep Tech Los Angeles (DTLA) – a collective of underground house producers from Los Angeles, all striving to build a grassroots movement of music, radio and events.

Established by Jason Trevor Miller aka Redux Saints/Placebo eFx, the first US graduate of the Toolroom Academy master program, his aim was to provide a medium for LA-based producers to be heard through organizing Deep Tech Los Angeles compilations.

DTLA Vol. 2 peaked at #1 across all genres, as well as taking #7 overall Beatport albums. Volume 1 and 2 gained massive support such as Mark Knight, Friend Within, Walker and Royce, Sirus Hood, Riva Star and Henry Saiz as well as others. Krafted Underground brings you the third installment looking to reach new milestones with impressive new comers to the collective.

Since DTLA Volume one was released, Deep Tech Los Angeles has residencies at Sunday Sanctuary, Station1640, and The Globe Theater.

We caught up with Jason Trevor Miller in occasion for the release for a deep and techy conversation about the project and where it’s heading.

Congrats on the third installment of Krafted Underground’s Deep Tech Los Angeles Volume compilation series. We’ve been here since the beginning which was not too long ago. To say the least, were pretty amazed to see how it has grown in a little over a year and excited to see where the Deep Tech Los Angeles brand goes!

Can you remind us what DTLA is all about?

Deep Tech Los Angeles (DTLA) is a collection of underground producers in Los Angeles area. At inception, the goal of the project was to provide a platform for up and coming producers through music, events, and radio. This platform enables producers to develop their sound and fanbase.

The longer you’re in the producer game, the more you realize you need to build your resume with reputable labels before receiving a big break on a bigger label. We at Krafted want to help producers achieve their goals along with eventually achieving ours as becoming a more recognizable brand/label.

You’re not the only compilation in town these days, tells us how you feel about other labels getting in the compilation game here in Los Angeles.

I am extremely happy to see another label in the area (Understated Recordings) launching their own compilation. If you look closely the majority of producers on their release, they are producers that have released on Deep Tech Los Angeles as well hence validating our A/R decisions.

I don’t look at their release as competition but rather another label highlighting the tremendous talent we have living in and representing Los Angeles.

DTLA Vol 1 was about building a collective ecosystem of LA-based producers to support one another.

DTLA Vol 2 grew this ecosystem by furthering the support for one another, hitting new milestones for both producer and label, and representing the underground sounds of Los Angeles.

DTLA Vol 3 continues to grow the DTLA brand and bringing new faces into the collective. The bar set for DTLA Vol 2 was high after achieving #7 overall selling albums on Beatport, and we now have our eyes on #1.

DTLV Vol. 3 has received massive DJ/Radio support early on? Tell us a bit about who is supporting the releases so far.

How long have you been working on piecing DTLV Vol 3 together?

I started to invite producers to volume 3 around Memorial Day. This time around it has taken the longest of the three to complete. With the quality delivered and new contributors, it’s been well worth the wait.

What were some of the criteria you used in selecting the tracks?

Got to ask you about your Redux Saints tracks, seems you’ve gone a different direction with your production? And you’ve now started a new moniker called Placebo eFx, can you tell us a bit about this project?

My six past releases as Redux Saints are focused on Tech House. I’m going to continue to have Redux Saints focus primarily on Tech House while my moniker Placebo eFx to be more on the melodic side that I love producing so much. For Placebo eFx I’ve joined up with good buddy Stuart Murphy and we work extremely well together looking to kill it in 2019.

For DTLA Volume 3, I have three tech house tracks as Redux Saints, and one progressive house track as Placebo eFx.

I’ve enjoyed created tracks for DTLA Volume 3 around collaborating with Lok N Key and Thomas Garcia. Both are super talented, and you can see their personalities come through on the tracks.

It features known and new artists to the label, quite a pool of exciting talent. Any, in particular, we should keep an eye out on?

We have some veterans and newcomers to the compilation from the Los Angeles scene. All tracks in my eyes are quality so I would keep an eye on everyone on it.

I know it may be an unfair Qs as you obviously dig all the tracks for them to be featured but… do you have a favorite or two?

Two new members that I’m excited to have their first releases on DTLA Volume 3 are Trent Cantrelle and Modus.

I’m also excited to add an additional female producer (JOELY) to the already stellar list of producers on here.

Redux Saints and Placebo eFx are the continuous mix duties this year. Redux laying down the Tech House sounds, while Placebo eFx bringing you home with everything else.

I was very pleased how both came out and I think that has a lot to do with the quality of the tracks.

How have things been going with you in the studio since we last talked?

As Redux Saints I’ve been working on several collabs that were in the finishing touch phase of each track. Some heaters with Mr. Oz and David Ricardo. David I recently had a release on Toolroom records for their ADE compilation.

As Placebo eFx we’re about finish up our next EP which has some of my favorite tracks produced to date.

Should be some news in the next several weeks what labels these tracks land.

The DTLA project has been blowing up, especially with the events you guys are doing. Can you talk to us about what’s ahead for you as far as that goes?

Our release party is December 14th in DTLA. We’ve established a joint party with Identity Presents with a great lineup. Modus will be headlining with DTLA acts Placebo eFx, JOELY, and Jaime Narvaez supporting.   Joining up with Identity Presents was a no-brainer this year as they are one of the few brands that support progressive house music, which I hope becomes more popular here in Los Angeles.

With so many music branded events and DJ crews in Los Angeles, what differentiates DTLA from the rest?

I’m sure you’ve heard on Fox News or CNN that everyone in Los Angeles is a DJ. Well it’s pretty much true.   What is separating DTLA from other branded crews and parties is that we have an international label backing it with all crew members being producers.

If anything, I hope it will inspire some bedroom producers to put their fears aside and get their act together to submit a track to Krafted. I can say from experience that lighting that fire under a producer’s ass is sometimes all you need!

Also, I believe our branding strategy is creative and unique because it represents a lifestyle. We’re doing a little more than just saying we eat, sleep, and take techno shits every day.

Why do you think LA is such a hot spot for dance music right now, from both the artistic and event perspective?

The right people, sounds, ideas, and weather are all coming together here in LA to make things happen.

I’m stoked for downtown’s further development and how the underground scene is going to influence it.

Running a label is no small feat. What are some things you’ve learned since getting involved with Krafted?

It’s taken a lot of energy, patience, and understanding to feel comfortable that I have created a path to happiness with what I do with music.

Regardless if I’m running my software company, working with my label partners, or producing music, overall happiness I feel comes with the respect gained by working successfully with other people. I’m hoping that’s what is perception that comes with anything I’m involved in.

On the Challenge side:

There was a steep learning curve in learning how to approach artists’ egos vs working in corporate America where I came from. Trust me, my passion lies in working in music, but the lack of structure and sometimes lack of integrity of the industry confuses me. For the most part I’ve been very lucky and worked with terrific people, but I can count a handful of co-dependent people I’ve had to tell to piss off.

Other challenge is trying to find new and innovative ways to generate revenue for the label. We are living in the times where music sales aren’t even going to pay the monthly clubbing habit. Technology is changing the game so fast it’s hard to know where you stand from day to day and what you’re doing is correct.

On the Fucking Awesome Side:

I’ve met so many fabulous people through music in all parts of the world due to; being a fan, working with Krafted label, or my music impacting them in a positive way. I wouldn’t trade this in for anything and hope to continue to grow my network of friends and family through music.

As the label’s work progresses do you feel its goals will also?

I feel like carving a career path in music is directly related to any endeavor I participate in on the music. If you not progressing then your regressing…