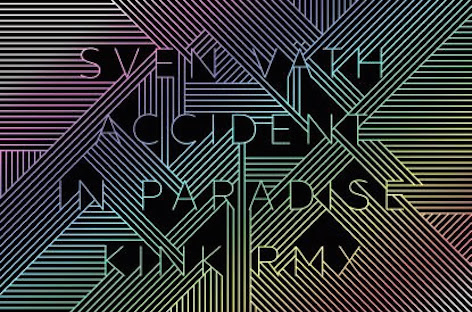 Cocoon is set to release a two-track EP on April 15th containing remixes of timeless Sven Väth tracks by none other than KiNK and Kölsch.

KiNK, top-notch Bulgarian producer listed as #1 on Resident Advisor’s poll for Best Live Acts of 2015, is poised to put his signature on 1992’s “Accident in Paradise,” while Kölsch is remixing “Robot” from the 1994 LP The Harlequin, The Robot And The Ballet-Dancer. Both tracks saw plenty of dance floor play at Omen, the Frankfurt club Väth was part-owner of until its closure in 1998 and were originally released on Eye Q Records, the imprint he started together with Matthias Hoffmann and Heinz Roth.

Whereas KiNK’s influence turns “Accident in Paradise” into a true acid-influenced re-work, Kölsch’s product has a bigger more energetic sound. Both remixes clock in at well over 9 minutes without feeling drawn out.

You can listen to both clips on Wordandsound.