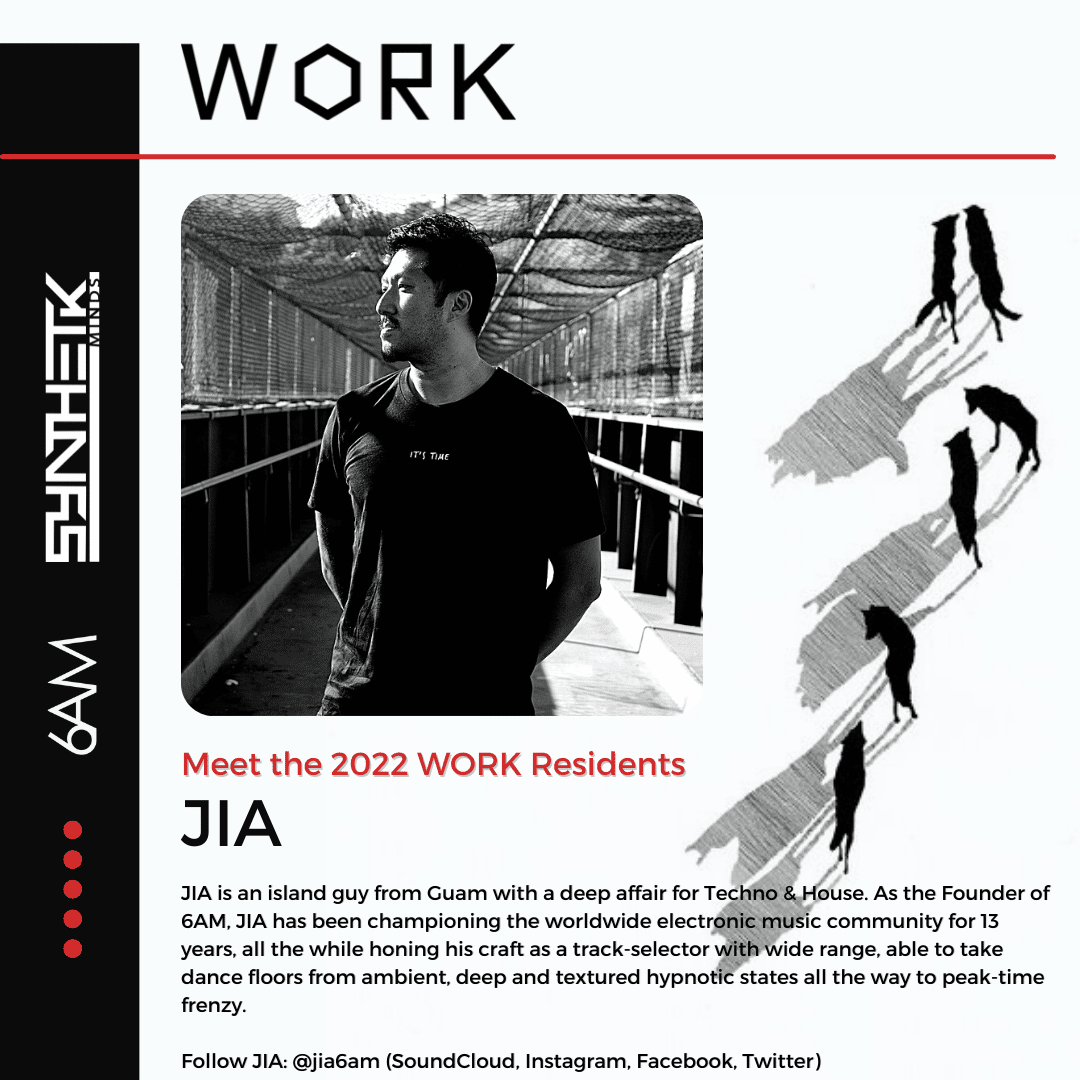 Hailing from Guam, Jia has had a deep affair for Techno & House. As the Founder of 6AM, Jia has been championing the worldwide electronic music community for 13 years, all the while honing his craft as a track-selector with wide range, able to take dance floors from ambient, deep and textured hypnotic states all the way to peak-time frenzy. His collaboration with Synthetik Minds promotion, also known as WORK, has been a house and techno powerhouse in the Los Angeles area.

Thanks for talking to your readers Jia, how’s 2022 been so far?

It’s been a productive one so far, I feel like the work that I’m doing now is really starting to ramp up and have a lot of meaning and purpose that fulfills me in ways I never thought possible. While 6AM is one brand, we essentially operate 3 different business units between events, shop, and media/content so my entire day/week is focused around the electronic music community and industry, but no complaints at all! At the age of 38, I can finally say that I am living the life I’ve been trying to create for myself ever since entering the scene in Summer 2006.

2021 is over, what were some of your big takeaways and achievements from the year?

Personally, I was able to rediscover myself mentally, physically, and spiritually for the next phase of life and welcome my 40s in a couple years. Health (mental and physical) is so crucial if you want to remain sane and have the energy to keep pushing forward in the journey- so that has been a big achievement for me because by allowing myself to be centered and aligned, I am able to continue this grind and deliver my best work now that I’m entering into my 14th season actively in the industry. 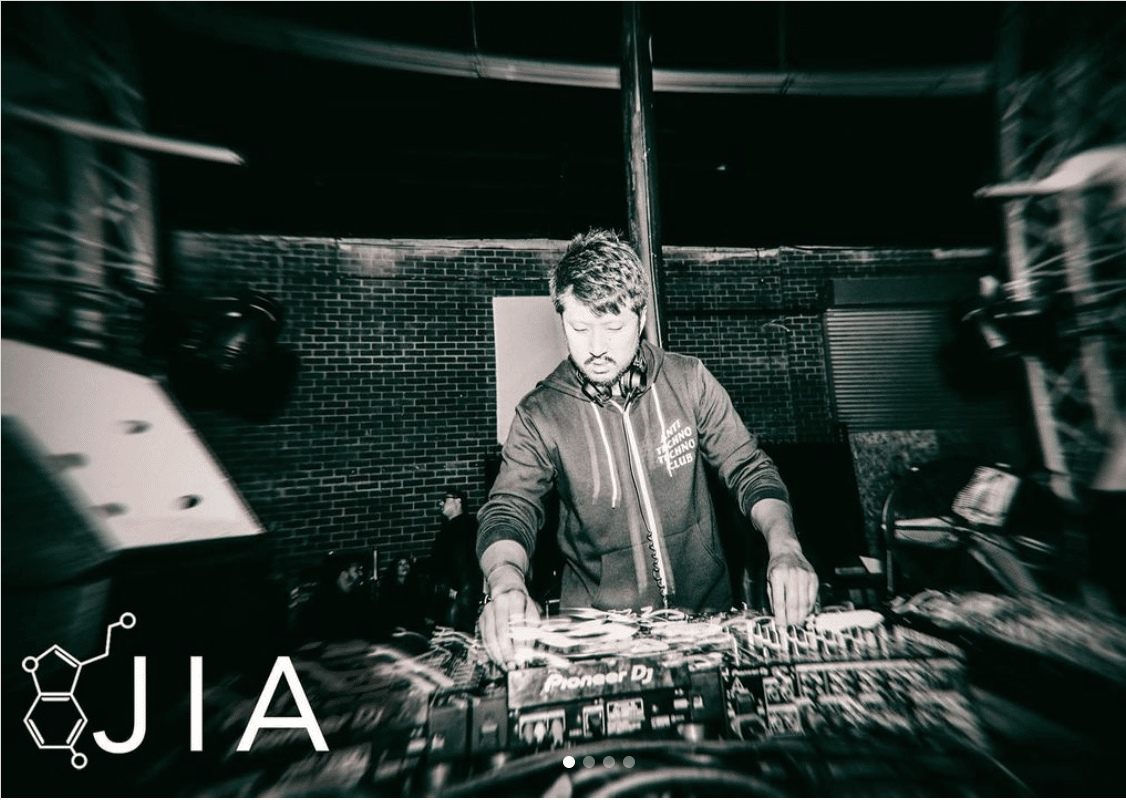 On top of that, June 2021 was quite a memorable month as we were able to resume with our events in Los Angeles after taking a break since March 2020. That has been one of the cornerstone memories of my life because everything up until then was so uncertain on what the future of the events-scene would look like. It’s safe to say we made it back and just super excited for what’s to come! I also got to play some really nice gigs in 2021 such as Compound, Beyond Wonderland, CRSSD Fest, and even got to play a show in Mexico City which at the moment is my favorite city to visit and play in!

Jia on his focus on personal improvements

You’re part of the head of WORK and launched the WORK Residency Program. Why did you decide to begin this program?

Very simple, there’s not a lot of “residency” programs anymore these days unless you are part of that collective and we feel like this is something we wanted to do to let people know that it doesn’t have to be that way. Also, here in LA we are surrounded by really good talent that deserve the recognition for the WORK they have put in. This is also using our event platform, that’s gaining recognition on a national and global level, to help the artists in the city we have been supporting through the years; And now doing so in a very intentional manner with this residency program. We hope to continue this program and use it as a platform to showcase deserving talents in our city through the WORK event series!

With all that you do with running 6AM and WORK and so much more, why was it important that you also participate in the residency program?

Well since you asked, I’ll tell you the truth. Originally when Marco Sgalbazzini suggested I be on the program I took myself out to leave room for someone else who I thought was more deserving. After I did that, one of the DJs we originally reached out to actually turned down the offer to be a WORK resident, so I took it as a sign that maybe I should just be on it. Especially being on the first-class I figured it would be a nice gesture to hop back on that list. We play once a quarter max so it doesn’t really take up much of my time plus it’s a stress reliever playing shows!

Read Next: 6AM In Interview with Marco Sgalbazzini: The Artist Journey Guide to Bookings 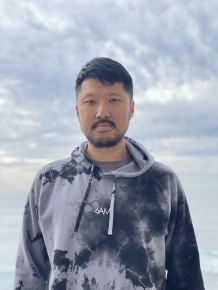 There is a stigma which I want to openly address about DJ/Promoters- where if you’re seen DJ’ing your own event you are seen as selfish with ill-intention on your approach. While I half agree with that sentiment because I have seen ill-intended DJ/Promoters, who only look after themselves rather than see their event as a platform to give others an opportunity, I also see the other side of the argument. After all it is the DJ’s party and he or she is throwing this event to also provide an opportunity for themselves to play. I don’t see anything wrong with it IF that is their secondary focus, meaning they are not just throwing an event so they can DJ, but rather they are throwing this event to contribute and provide opportunities for the community. A lot of the time, that gets muddled because anyone can say that and then act however they want. It’s one of those things that can only be deciphered when you look at the event, how they promote, and even where they put themselves on the lineup.

“…here in LA we are surrounded by really good talent that deserve the recognition for the WORK they have put in.”

This is not to say that promoters who are good DJs should never book themselves but there is an approach to it and an intention that layers underneath that approach. It’s all about finding that right balance when playing the DJ/Promoter angle. I know a lot of people probably laughed and rolled their eyes seeing me on the residency like “Duh, of course he would put himself there”; but here is the truth: I didn’t. As I explained above, but the opportunity still came back around and I know I deserve it so I am not ashamed of taking the residency slot no matter what I thought people would think!

How would you describe the style of techno that you play?

Situational Techno meaning I play the sound most fitting to the vibe and atmosphere as well as the energy of the crowd. I play A LOT of opening sets so understanding how to build up a night using lower BPM or softer basslines will be the kind of mood I usually set. When peak-hour calls, we do what peak-hour DJs do right?

I guess what you’re asking is my sweet spot and it usually ranges between 130-134 bpm, more of that groovier sound of Luke Slater/PAS Rene Wise, Ecilo, Sterac, Joel Mull, and many of the likes. They have been a big influence in finding my sweet spot and my go-to choice but when you’re still grinding in my position it’s best to be situational because you never know what slot you’re going to get. I have played many direct supports and closers and those were always the most fun for very obvious reasons- but I can’t be playing that all the time so I legit just call my style of Techno, “situational”!

Who were some of your biggest influences as you were developing as a DJ?

While I don’t agree with their choice of sound or music direction at all anymore, the DJs that really influenced me was when I was still coming up in the scene and they were Donald Glaude, Fedde LeGrand, Antoine Clamaran, DJ Dan, Rank1 (yes I dig trance), Kaskade, and Doc Martin. I was developing as a DJ in 2008/2009 so those were the acts I recalled gave me a lot of inspiration to go home and practice on my demons and DJM 400s!

For Techno, which I later got into around 2012/2013 that’s when Drumcell, Truncate, and that crew. They became on my radar and to this day you will still hear me shout their names as one of my favorites. Definitely one of my most influential artists when it comes to real techno. I find it super cool that they are here from LA! Speedy J, Luke Slater, and Joel Mull all played a big part in my later years developing into the techno DJ I am now.

What were the biggest challenges that helped form yourself as a DJ and business owner?

Separating the both and I mean it – there’s no way I can pursue the rockstar DJ life and still operate 6AM at the level I am doing. I decided to sacrifice that DJ life to be more focused on building the brand and truly leave something that will be here long before I am done raving or even on this earth. It’s a big ambition and some call it crazy or even egotistical; but to me, I have found my purpose within my passion building 6AM and I feel like my time would be spent more impactful if I took this route as being the coach and mentor for the global community.

Read Next: Entitlement Epidemic of the Guest List Request

As much as I still want to DJ, I understand there is a sacrifice I made that hinders that part of the journey. However that is not to say I am going to stop DJ’ing because this is far from over for me. I still have DJ goals I want to achieve but understand they may come at a later time and I also need to be patient with myself. I can’t catch two things at once, but thankfully I still do get called for bookings here and there with a lot more festivals and overseas opportunities than ever before which I’m grateful for. local and regional gigs have definitely slowed down and that’s OK with me given the challenge of needing to juggle the DJ life and running 6AM

Well 2022 is already here, and I am looking forward to what I have always been looking forward to since starting 6AM in 2008 : To contribute to the industry and community to the best of my ability. I am grateful for my amazing team who help ensure we are always pushing forward.

Besides that, I am obviously excited about all the WORK events and other partnered events in general like REFORM and COMPOUND we have coming up for the year. Our shop is getting busier than ever and now doing festival pop-ups wherever we can pop up so it’s been a really interesting time.

For me as a DJ, I am looking forward to playing Beyond Wonderland again and any other opportunities that come my way. This is going to be a year where I will put more effort into giving back to the DJ/Promoter/Producer community and working on different angles of ArtistMap as well as our website, to deliver content that has meaning and purpose for our readers.