Is Business Techno Officially In Business? 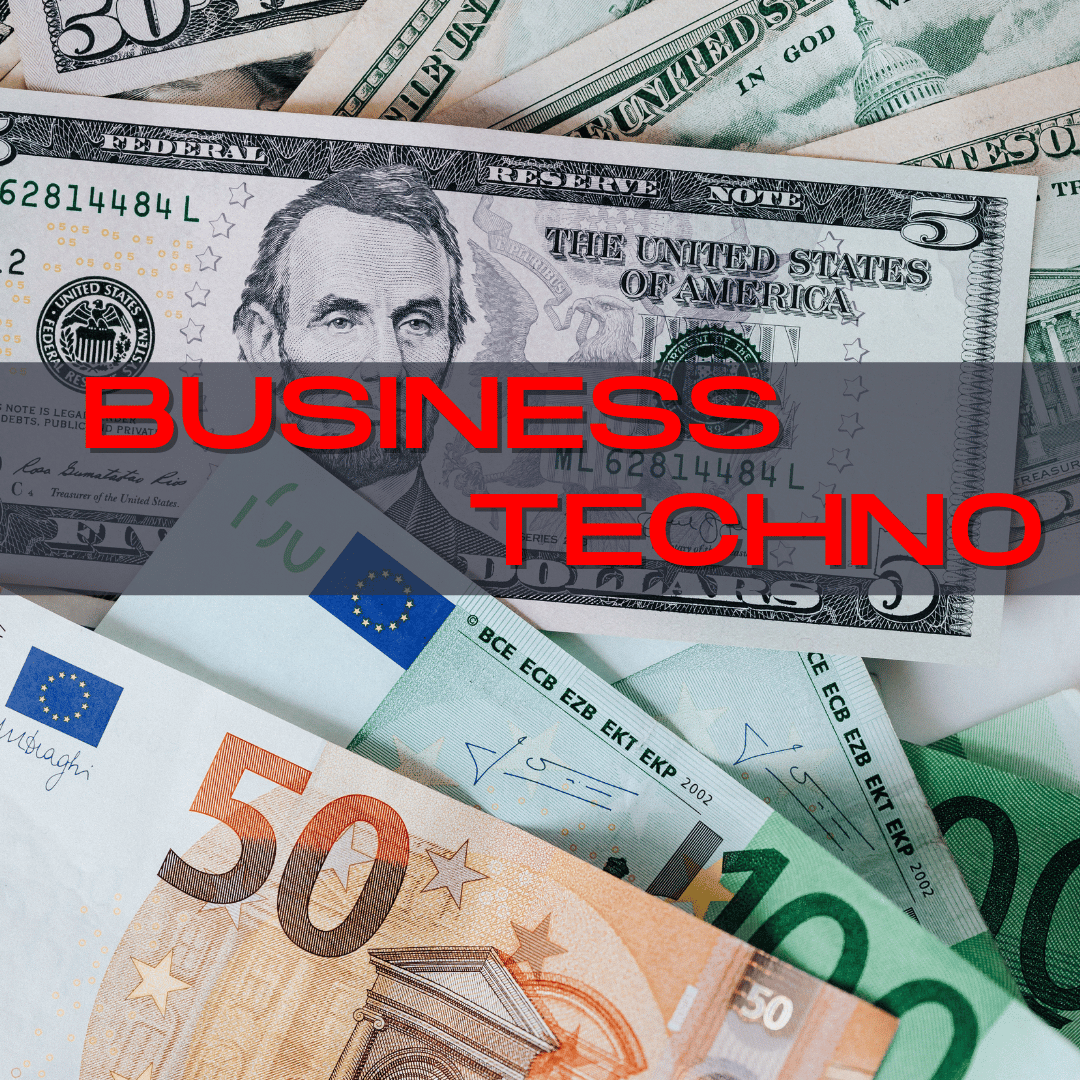 Is Business Techno Officially In Business?

The convoluted term, “business techno,” has been floating around the internet and everyday techno conversations for a few years.

However, on Feb. 24, 2022, Billboard Music interviewed techno legend Sven Väth. The interview asked a range of questions of the artist, but one particular question stood out amongst the rest: Question 10 asked Sven for his take on “business techno.”  This is the first time a major non-dance music-focused publication used the term. Does this mean “business techno” is no longer an underground joke but a real life concept that even the general public recognizes?

What Is Business Techno?

The term “business techno” is fairly new and has a relatively elusive definition. It was coined by the artist Shifted in a Twitter interaction with Truncate in 2018: 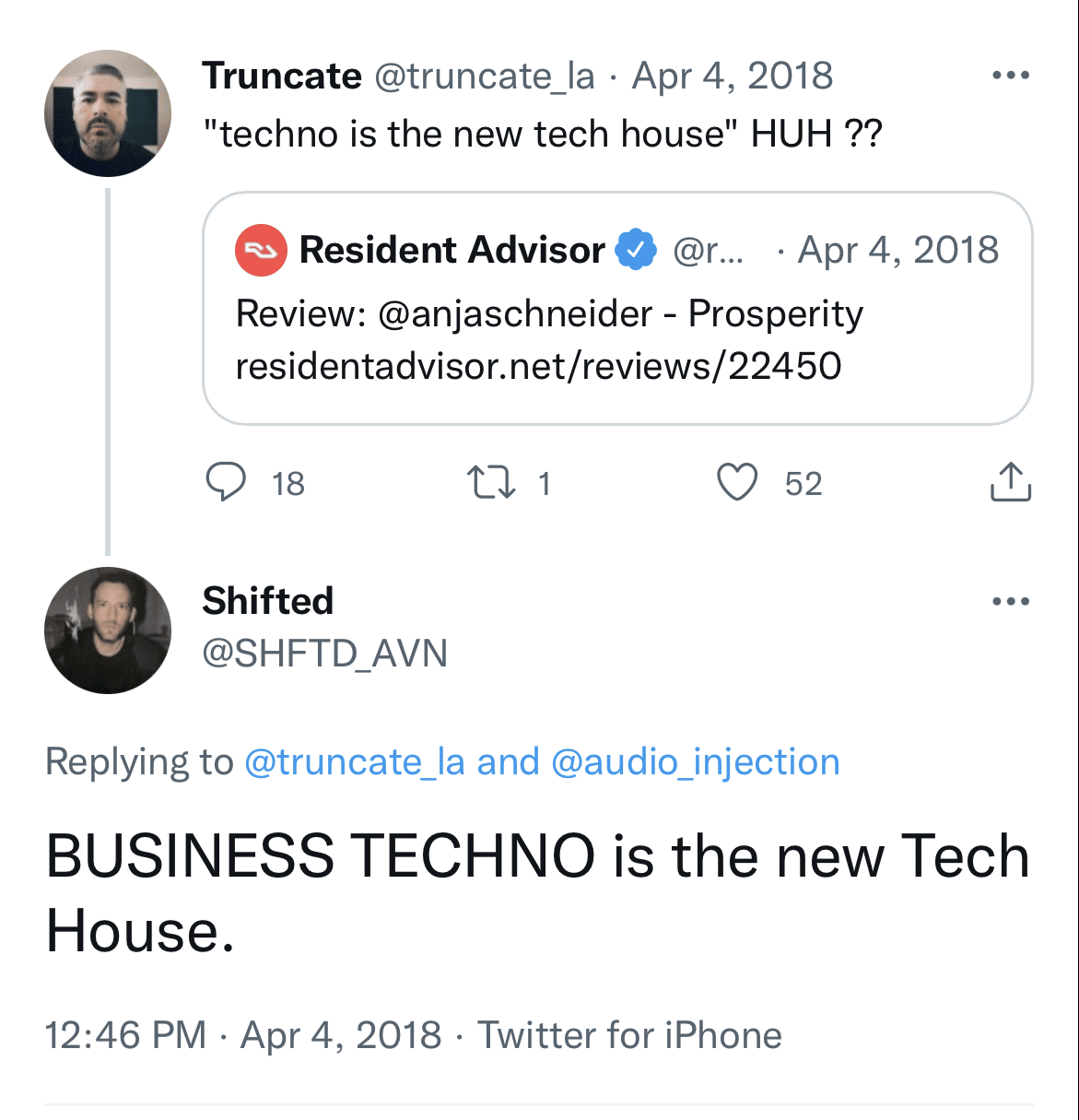 Since “business techno” was coined, the internet went on fire using the term and trying to define it. Many people labeled certain artists and genres of techno as “business techno” for a few years now. People have used the term for techno events that have bottle service. Others have used it for artists who continuously play at large EDM events, etc.

For the sake of time and debate, the simplest definition could probably be found on the highly questionable, non-verified but most relied upon urbandictionary.com. The slang definition site defines the term as:

“Techno that is considered mainstream and commercialized.”

Techno music and techno fans often pride themselves as being an “underground” type of music not fully appreciated by the general public. However, anyone can tell you that the genre has been growing in popularity over the last couple of decades. It has evolved into something completely different since its inception. So the idea that this genre has become more mainstream and commercialized is definitely seen as negative amongst many techno heads. Therefore, calling something “business techno” is considered to be a derogatory term.

As mentioned prior, “business techno” has already been written about and debated for a few years now. It’s not hot news, and let’s face it, the idea of commercialization of any music genre has been around forever. However, with Billboard using “business techno”, the “scene” is now at a point where the term for labeling something as mainstream and commercialized has now become mainstream itself… Ironic much?

In other words, it means that techno and techno artists have gotten so big that even big major publications recognize there is a commercialization trend within the community. The term is no longer an underground slang term but a fully recognized concept even by the general public. The fact a major music and entertainment media company also used a (derogatory) slang term, instead of saying something along the lines of “widely listened to” or “popular” may also mean that even they see it as a “bad” thing. Maybe they’re just also following a trend as well? Again… irony.

Since the creation of the term, the internet spread labeling everything they don’t like that’s become successful as “business techno.” The concept has even pervaded into misogynist based accusations as highlighted by artist Scuba: 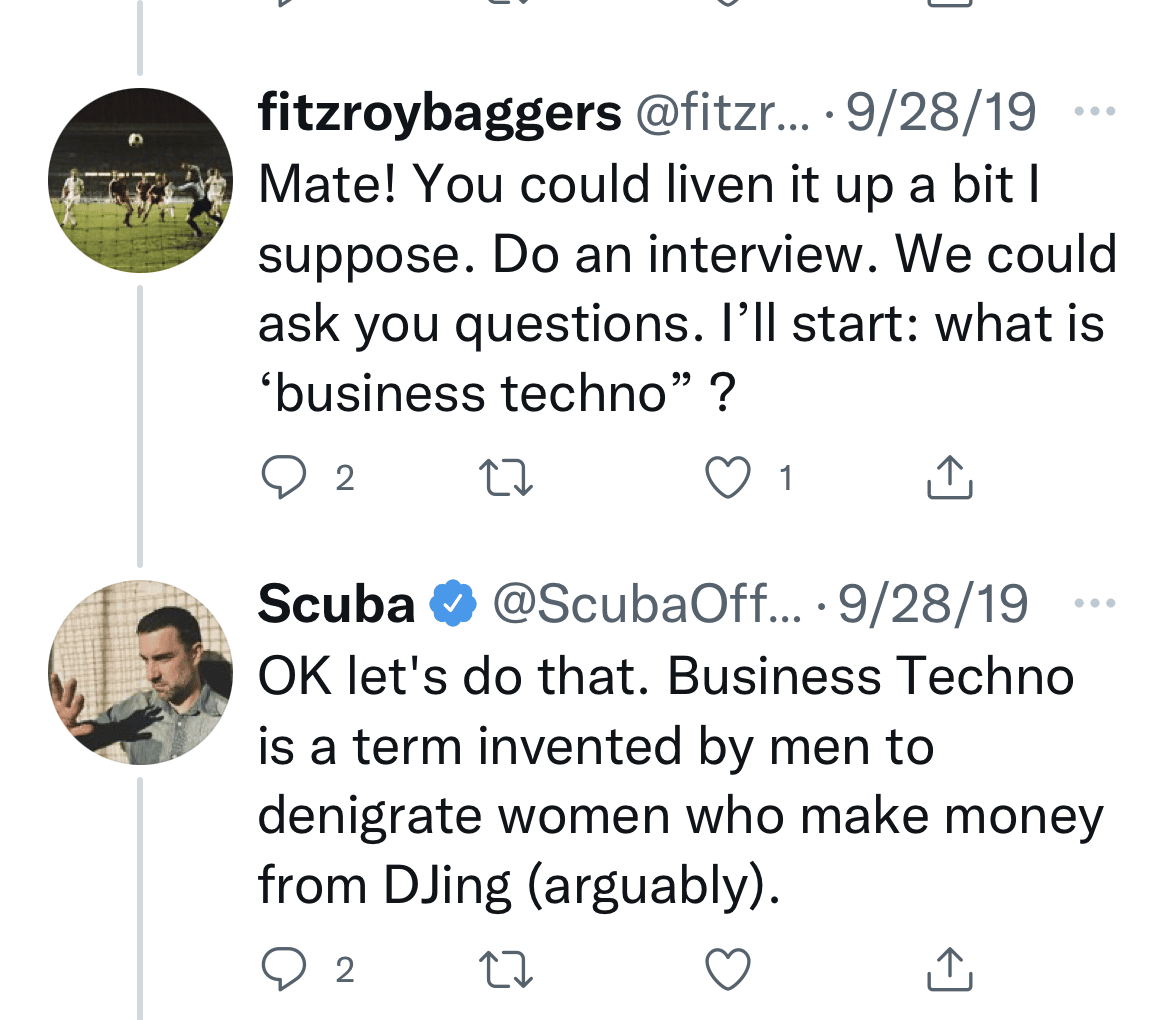 Ironically (again) using the negatively based “business techno” term has almost become negative itself. Using the term to just denigrate women obviously needs to be put to a stop. As far as people looking down at successful artists, labels or music etc. strictly because they’re successful should also be put to a stop.

People can be proud of artists becoming successful and that more people can share the enjoyment of the music. If the artist continuously makes good music, puts on a good show, creates good vibes and the general public happens to like it, why get upset? Sure maybe you don’t like that artist or what music they make, but to be upset at an artist strictly because they are becoming successful- is a fairly selfish act and just plain snobbery. However, there are those out there who probably have more nuanced concerns about the growing commercialization of their beloved music, and “business techno” does bring up legitimate issues.

One very legitimate concern of “business techno” is when an artist (of any genre) becomes “big” and that can change an artist and their craft. It’s been a historic trend that artists and genres can lose their ability to create freely when big money and popularity come to play. Not that techno artists don’t currently create to evolving trends or bend their artistic vision, but now there exists even more pressure and financial incentives to create something that appeases the general public or whatever financial sources that are funding them. Of course, not to say all artists lose their artistic integrity, but there is definitely an added pressure.

“… techno and techno artists have gotten so big that even big major publications recognize there is a commercialization trend within the community.”

Another aspect that can be a legitimate concern of “business techno” is the possible change or influence in the community of techno lovers. Despite loving dark fast-paced music and having the “techno snob” reputation, there is quite a caring environment at techno parties. Sure there’s always the occasional idiot or jerk and there are parties where not everything is PLUR, but overall techno fans love other techno fans and look out for each other and others even outside of the technosphere.

Now the general public seeking out techno events and joining in on the fun doesn’t mean that there will be a huge negative paradigm shift in the community. In fact, if the general public comes in and genuinely embraces the music and culture, it can only lead to greater growth and prosperity for the techno community. However, let’s face it, there are people who go to parties for the wrong reason or don’t quite conduct themselves in a way that is acceptable to community members. Having people who just go to parties because it’s the “cool” thing to do can open up more possibilities of unwanted vibes and interactions.

Another aspect of something becoming “business techno” is the sheer fact that this will inflate ticket prices at an unprecedented rate. Now once again, artists becoming successful who put out good music and good vibes, should be congratulated and higher ticket prices are expected and understandable. However, once an artist gets to the point where even Billboard.com may think they are “business techno” their ticket prices are probably going to skyrocket. In addition to having difficulty getting tickets, there will probably be an increase in the number of patrons that just go because it’s the “cool” thing to do. This will probably affect the die-hard fans’ wallets and dance experience at a rate they are just not prepared for.

So does this mean it’s the end of days and our cherished music and scene? Obviously not. The die-hard fans and true community members will be here no matter what and will enjoy whoever and however, they like. Even if ticket prices go up or the environments/vibe change, the fans will find a way to enjoy that dancefloor. The techno and house community will always be here, but now “business techno” is also “officially” here.

Using the term “business techno” to downplay an artist’s success, the crowd they draw, etc whether valid or not is entirely up to you. Just keep in mind now the concept is not just a funny jab at someone or something, but a real thing that can affect your nightlife experience. With Billboard.com recognizing the growth and commercialization of techno, it’s more important than ever to bring genuine good vibes to big artists’ shows you catch.

It’s also just as important to support your local artists and scenes, emerging acts, and anyone who’s trying to grow a genuine techno fan base. You don’t have to be a “techno snob” but maybe show people other “underground” artists and parties that are happening locally. Take that extra step to show the techno scene some extra love. In other words, don’t just let techno become “business as usual.”