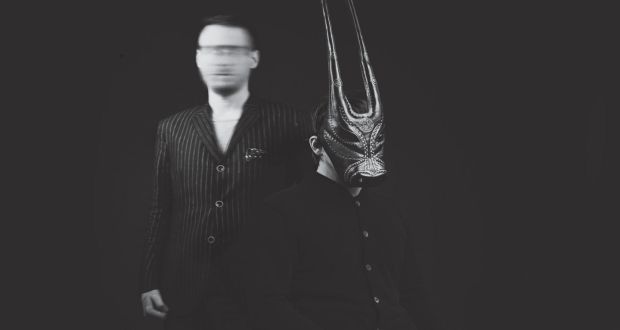 Stimming x Lambert are very unique artists who present the soundtrack of their times by not only quoting their past, but constantly exploring futuristic soundscapes.

Both mix classics with postmodernism and the unexpected with the long-established, in order to create something that fills our needs in a very surprising way: getting excited about very new and astonishing tones while feeling at home with sounds we never really knew we liked. Both artists come from a classic background, studied their instruments from the peak. But whereas Lambert sticks to his piano, stays plain with this diversity of romantic, jazzy, minimal opulence, Stimming mixes digital sounds with field recordings, the rattling of a coffee machine with 18th century music.

All this combined on stage makes it even more exciting – the man with the mask who is not Daft Punk (at all) and the minimal composer, who is not (only) an international House Live act. Together they have combined for Exodus, their first studio collaboration that also heralds a new series of live shows that will see the two combine in front of audiences around the world.

I did most of this production while touring in Asia last year, in an 8 square-meter hotel room in Osaka. On the surface tablet with my Elektron instruments (Rytm & Octatrack). My idea was to combine the kind of grooves from my Liquorice album with the amazing beautiful melodies and harmonies that Lambert was sending me. I always thought: If I would be able to play piano on a high level, I would love to make the music Lambert is doing. – Stimming

One day I saw a documentary about Stimming in which he said: “Perfection is for idiots“. I don’t think music by idiots necessarily is bad, but I wasn’t sure if this statement was just an attitude, a description of the creative process or simply an honest self-criticism. But I knew instantly: I can apply this statement to my own music and life. So I wrote him a mail and he invited me to his studio. We started to improvise and decided to send each other ideas and see what becomes of it. I sent him piano sketches, but also guitar and string stuff. Later I made noises on the wood of my piano and built beats out of these sounds. Martin was touring in Asia at that time and he started to transform my footage into something new in his laptop. Anytime I received mail from him I was so curious to hear what he made, to see where something was added or cut. As I can’t sing but wanted a voice in these tunes I recorded a simple “Uh“ and built an choir out if it. – Lambert

Stimming x Lambert made their debut on label Life and Death’s Displaced Soundtracks earlier this year with their initial track, “Trafic Aérien”

Exodus was just released on the new Berlin label Kryptox this past March 9th, 2018. Kryptox is the new label for Neo -Jazz/Kraut/Classical and Ambient music founded by Mathias Munk Modica, who is also behind German Electronica label Gomma and the creative mind who produced/ released early works of James Murphy (LCD Soundsystem), Franz Ferdinand, Daniel Avery, Peaches and other artists from the indie dance world.

We spoke to Lambert about collaborating with Stimming, the release and the forthcoming tour dates:

Congratulations on the album guys, how long have you been working on it?

Thank you very much. It took us around 15 months, but with a lot of breaks in between, because next to this production we both had to work on our solo releases and concerts

How did you two first meet?

Martin wrote me (Lambert) a message that he just discovered my first solo album, I wrote him back that I recently discovered his music. We noticed that somehow, there is a connection in our sound. something organic, that we share.

What did it take before you decided to work on music together?

One hour of improvisation together. We met at Martin’s studio in Hamburg for the first time and we immediately started to play. After one hour we stopped and had a coffee. We decided that we have to work together somehow and continued playing.

Actually we thought o doing one or two songs together, but somehow we had more ideas that we wanted to share and the process was so inspiring, that we realized we had to think bigger

What duties did you share on the album? Did you work on it together in the same studio or was it done via the power of the internet?

We produced separately most of the time. I sent Martin ideas, he brought my ideas in order and added his ideas, then we did the same thing for another round on each track. Martin did the finalization and the track was done. This way of working had basically practically reasons, we don’t live in the same cities. Martin lives in Hamburg in I live in Berlin.

The album is entitled Exodus. What inspired that name?

Escape from our musical genre boundaries, the strange relation between urban living and the nostalgia for nature, and let’s face it: it’s a present topic of our time.

What can fans expect from these shows?

You can hear both of your influences in the tracks, but it’s a stand-alone album when compared to your solo projects. Was this intentional from the beginning?

We never discussed style or what type of music it should be in the end. Both of us took the opportunity to go down completely new roads. I am happy that this way we didn’t fall into the trap to produce a ‚piano meets techno‘ album. Somehow we found ourselves being independent from styles and genres. Sometimes I think it is closer to a ’90s Trip Hop tradition than to modern electronic music, and luckily far away from classical music.

Will you guys be playing any dates together as a live or DJ act?

We play live shows. Starting in March 2018. Martin will have a little Set up with two Octatracks and a little Synthie, while I will just play the piano and send the Piano signal through his Octatracks, so he can process, develop and work with it while we are playing.

We’ll use our tunes as a basic tracks, but can fool and play around with the. Being flexible on what aspects of the track we want to focus. We have the freedom to decide on the spot. I like that improvisation will take a big role on our shows, that way we can keep it fresh and new every time.

Do you feel this project will expand to further music and tours or is this a one-time collaboration?

We already have some very nice new ideas, it would be foolish not to continue working together.

What’s the most important thing you’ve learned from working together on this from a producer’s standpoint?

I learned from Martin that vintage can suck as well!

Do you two hang out and do things outside of music at all?

We live in different cities and when we meet it is usually about music but we get along well and share an interest about good food.

EXODUS was released on KRYPTOX, a brand new label from Berlin, on 9th of March 2018