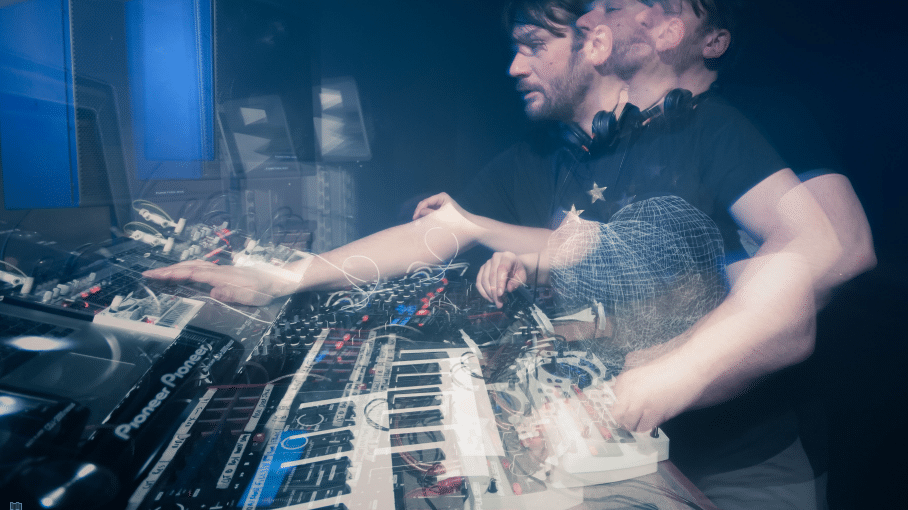 As one of the UK’s most exciting acts, Saytek has carved out a unique position for himself over the last few years. Having built a reputation for innovative, improvised hardware heavy live sets that span the house and techno spectrum, he is now widely regarded as one of the nation’s very best live performers.

Two intensely creative minds meet for the twenty sixth release on Constant Circles, delivering a fusion of raw live house and techno with cutting edge street art, for Circuit 3am.

Saytek makes a welcome debut on Constant Circles with three fresh live jams, featuring his unique blend of deep techno & dubby house grooves. His improvised live sets use a myriad of kit both digital and analogue, and have garnered him critical acclaim the world over and established his place as one of the electronic music scene’s most in-demand live acts.

The release is paired perfectly with a distinguished piece of street inspired art from Unknown, one of the key players in the world-renowned Brighton street art scene. His street pieces are highly distinctive, but his studio works are also unique and dynamic, with the versatility to create on any medium and a vision for subtle and humorous storytelling.

6AM is no stranger to Saytek, having seen him featured for a mix and live session before, as well as several features. We have long recognized his talent and had the chance to speak him newly about his recent releases, and much more.

Hi Joseph, it’s great to meet you, what part of the world are you currently based, and what inspired your alias Saytek?

Hello! I am in North West London at the moment. The Saytek alias is actually nearly 20 years old now. Sadly there is no big story behind my alias, it’s just a name that I thought sounded cool, and after it was used for my first vinyl release it has stuck ever since!

I’ve just been listening over your new Saytek release on Constant Circles and wanted to ask you a bit about the tracks, as each of them are listed as being “Live”. Does that mean you made each of them in a single take, or did you record some of the parts separately?

All the tracks were edited from a live set at Sisyphos in Berlin. I was lucky enough to play in the Hammerhalle, which is the large industrial main floor. It was a great gig packed with a fantastically responsive crowd, real underground Berlin vibes!

I’m really interested in your production style as I did some research before chatting with you, and it sounds like you are quite respected in the music industry. Am I right in saying you also work with a couple of equipment companies trialling their new bits of gear?

I do, but I am sworn to secrecy about it all! I am lucky enough to see and try out new equipment before it goes to market, and I also get loads of free stuff! It’s a dream come true for someone like me.

Do you also DJ or is it always a live set with synths and drum machines when you are booked to play in a club?

I only play live, I was obsessed with music technology as a kid, so kind of skipped the DJ’ing bit and started playing live nearly 15 years ago!

So what’s it like playing live, do you just turn on your equipment and see what happens, or do you start with some sounds you have already made prior to the set?

The main synth lines and drums are often stored in patches that I’ve pre-made, and those are a bit like the instruments themselves. Before preforming you first need to have an instrument to play… synths, samplers and drum machines do nothing until you have made a sound for them to trigger. Synths are a bit different, but to keep things simple this is probably the best analogy.

Once I’ve loaded the patches into the equipment, the equipment then becomes an instrument, and how each instrument is played all happens live. For example, if you listen to the track “Macros” on the Constant Circles EP there is a section that goes pretty crazy, and that’s a result of me tweaking the synths live. I’m also applying FX and playing around with the looping drums, as you can hear the arrangements are freeform and done entirely on the fly.

I also create synth lines, drum patterns, and one off sounds live, whist also applying FX’s like delay, filters and reverb, plus others that help transform the sounds. All this is done impromptu, so it’s partly me arranging pre-existing sounds, but which sounds are used and how they are played… is 100% down to me.

If you had to only take the bare minimum to a gig, and had to bring just two or three bits of essential equipment, what gear couldn’t you live without?

Haha, that’s a hard question, and I don’t know to be honest. So much music comes from different places, so I’m afraid I can’t answer this… it would be to disrespectful to each bit of equipment I didn’t pick lol.

What’s lined up for the coming months, do you have anymore new releases in the pipeline?

I have live jam release coming next on Hike Recordings, which is a cool independent label from Berlin, and that features a re-edit by Kevin Saunderson!

I am very happy to be releasing the jams recorded at the 30 years of Shoom Party as part of the Superfreq line up. Danny Rampling asked me to perform at the event, and it’s great to be releasing the tracks on such a cool label! I also have an album of tracks called “Live Stories” coming on Darren Emerson’s label Detone. Right now, things are going really well for me and I’m super happy.

I hope to see you perform in a club one day, what’s your gig schedule looking like for the next few months?

Current 100% confirmed shows are below, and my agent is currently in discussions with festivals in Germany and Canada, so there will be loads more club gigs, so keep an eye out!

Thanks for taking the time to talk with me, is there anything you want to add before we wrap things up?

Nothing really, apart from saying thanks for having me!