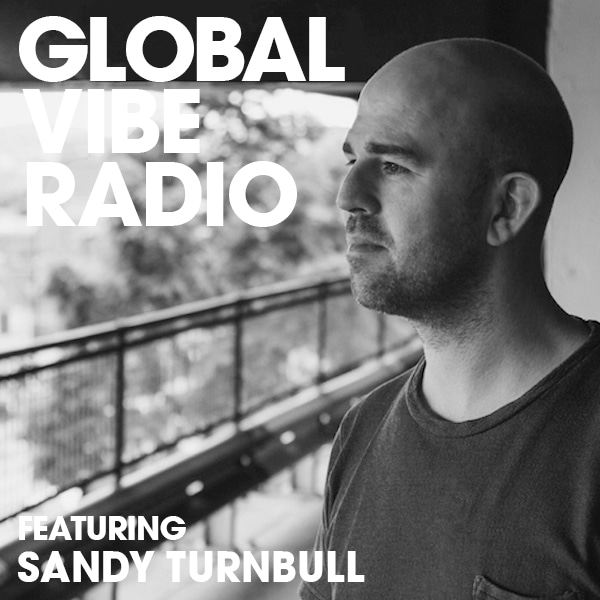 For this week’s episode of Global Vibe Radio we welcome Galleria Records boss Sandy Turnbull, who has fast become a prolific artist in recent times, his distinctive Disco House fusions championed by the likes of Derrick Carter and Groove Armada to Soulclap, Mark Farina and Sonny Fondera, among others.

Listen too the mix below and read on for both track list and our exclusive chat with the Sheffield lad as he reveals his exciting new “Night Talk” series.

Hi Sandy, can you tell us a little about where you are from and how you were introduced to the world of DJing and music production?

Hey, I grew up in a town called Barnsley in the north of England. It’s virtually in the middle of Sheffield and Leeds. I became friends with the resident DJ in the local club who taught me the basics in terms of beat matching and took me to Leeds record shopping. This was in the days where a record could be on promo or import 6 months or more before the general release. I had been making little edits and tried to make music for a while before enrolled on a music production course with my good friend Ryan Davis who produces under Nyra and Dan Evans who runs Dilate records. By this point I had already been DJ a number of years both up and down the uk and internationally with notable residencies for Gatecrasher and The Pin Up Club.

You’ve had releases on Soulfuric Deep and Open Bar, among others and set up your own label, Galleria Records, in 2012, how’s that going?

It’s going great! Starting the label was honestly been the best thing I have done. I’ve learnt so much about the music business and what goes on behind the scenes in running a label it has been invaluable. The timeline of stuff that needs doing in the run up to the release can be hard work but I enjoy it.

Would you say running your own label has been beneficial to you as a developing artist and if so, why?

Being able to release on my schedule gives me so much freedom. There can be times where you can agree to sign a record then wait months for it to come out. It has also helped me develop relationships with other artists and DJs

You’ve been labelled as somewhat of a Disco House wizard and you’ve even collaborated with Danny Krivit, who are your biggest influences?

Disco is certainly a big part of my sound and I’ve been influenced a lot by labels like West End, Prelude, Salsoul and Philadelphia International Records. Early on I didn’t realise that I was drawn to records that had disco samples so finding the original records that these sample were taken from was really good. I would spend as much time in the back rooms of clubs like Bed, Hard Times and Basics where disco would be predominately played as the main rooms and the residents would influence me as much.

You’ve launched your brand new Night Talk Series with “Tonight”, tell us about the release and how it sounds and what we can expect from the series moving forward?

Tonight is piano house track that I’ve done with the very talented Mr Bailey on vocals. It’s the first time we have worked on track since Dreaming in 2012.

The Night Talk Series is a way to open up to artists who wouldn’t necessarily be the typical Galleria fit. The concept will have a lead single which will be a traditional Galleria record followed by the remix package which will have at least one mix that will be from outside our normal genre, backed up with more killer house mixes. Remixes isn’t something we have done very often for a normal Galleria releases. The artwork will be totally different with a new artist every time. With this release Rob Morgan who based in Jakarta has launched the series for us.

How did you go about selecting the remixers for the release and are you happy with the results?

Christian B and I have supported each others music for a while now. He runs Friday Fox Recordings with Lavvy Levan. We had a quick chat and thought it would be quite cool to do a remix for one another. Future Wildstyle are a duo from Sheffield who I have known a while. While a most of their productions I can’t really play in my DJ sets, I really like their stuff. Andy and Austin are ridiculously talented as DJs and I love catching them when I can. I sent them Tonight and asked if they fancied doing a remix and they did it in no time at all.

You also have some of your own remixes just out, including Skydoll’s “Feel You” and Christian B & Larry Levan “Feel Alive”, how do you typically approach constructing a remix?

It starts with seeing what parts I get send. I think ‘Feel Alive’ was just the vocal. I tried a couple of instruments to lead the track musically before it came together. For the Skydoll’s track I actually made and submitted them a more disco version that they liked. I had quite a bit of time left before deadline so I decided to go back and make a version that I feel was inspired a bit by New York’s ’90s vibe and let the guys pick which version they liked them most. I was a tough decision.

What pieces of studio kit are essential Sandy Turnbull’s sound and how do you go about sourcing your samples?

My tracks can be quite different. A go to keyboard is the Roland Juno 106. Sometimes I make it really noticeable and sometimes just set back in mix. Sourcing samples comes from my pretty big collection of disco, funk and boogie records. I also spend a bit of time record shopping to find  artists I haven’t heard off. I have a little folder that I’m constantly adding so if I’m playing a records and it sparks an idea I can pop it in for future reference.

What’s your own personal favorite production so far?

It is really difficult to pick one but The Most Fantastic Thing with Danny Krivit on Soulfuric Deep is probably up there. Just because if the whole experience of working with Brian Tappert, signing to Soulfuric and it being my first Traxsource number one.

My first gig was at the local club I mentioned earlier. The venue was called Regents Park in Barnsley. I ended up being a resident at the club for a while so it must have gone ok but I’m not sure how busy it was that first night.

What have been your highlight gigs this year so far and what are you most looking forward to?

The highlight for me this year has so far has been Tramlines festival. I’m really looking forward to some of the label parties that are coming up. We are going to be including all the people who work with it on the line ups plus some headliners who give us some brilliant support.

This is a really hard question! There are so many it would be really hard to pick one. Brian Tappert or Simon Dunmore would be pretty special. Also either members of Masters At Work, Karizma, Tony Humphries, Derrick Carter or Mark Farina. I’m missing out lots of people by just naming them

It has to be Tears by Frankie Knuckles, I just love this record.

Finally, what’s coming next for Sandy?

After Tonight comes out this month, I have releases coming out on Lyceum Social Club and Guesthouse. In November I have an EP coming on Galleria with a vinyl exclusive first. I’m just finishing of a remix for Soul Central so hopefully that will be coming out soon. Gig wise I’m pretty busy and you can keep up to date with where I’m at via facebook.com/sandyturnbull. music and Sandy Turnbull on most other platforms.