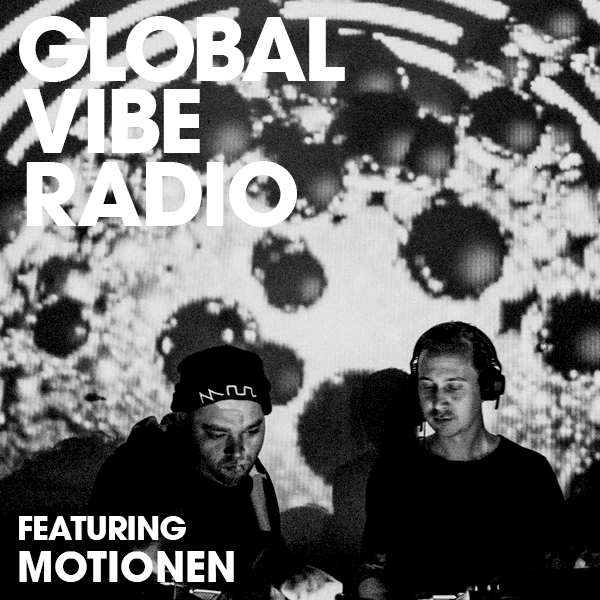 This week it’s the turn of Los Angeles audio-visual project Motionen to step up to the Global Vibe Radio decks for what is now our 59th episode.

Composed of Matt Salamone and Carlos Matamoros (a.k.a Altrd Being), the duo produce techno, acid, ambient and dub, and DJ both individually and as a duo. They are also the founders of Ascetic Limited, a young imprint that focuses on the driving sounds of acid, ambient, and deep techno. Since its fairly recent inception, the record label has come out with two strong releases, EPs featuring tracks and remixes by the likes of Christian Gerlach, Dorian Gray, HOBI, Deepbass and Motionen themselves.

2017 is looking like a busy year for Motionen. They began the year with a label showcase in Los Angeles featuring Deepbass and Reggie Van Oers and have just announced Mike Parker as the headliner of their next event in LA on June 24th. Musically they have upcoming release on Lanthan.audio and OFF white records out of Italy and are slated to perform at Synthetik Audio, a Movement weekend day party at The Works.

Enjoy the mix and read on for our interview with the duo and full track listing.

Hi guys, thank you for the mix! Where was it recorded?

Thank you for having us. It was recorded in our studio.

What are some of the highlight tracks we can find on it?

A few tracks from the next release on Ascetic Limited.

You’re a duo out of LA, a city with an amazing techno scene right now but also with a rich rave history. Can you tell us a little about your individual path in electronic music and how it led you to techno?

Carlos: My first encounter with any sort of electronic music was my first weekend as an exchange student in Italy with a program called AFS in 2006-2007. Little did I know I would find my passion for techno there, but I definitely felt a strong connection to the sounds I heard coming out those speakers. After a year of living in Italy and going to house and techno clubs regularly it was time for me to go back to Honduras where I was raised. I was quick to find a very small group of people into techno and joined event promoting crews as a promoter and VJ for nights all over Honduras until 2011, when i got into film school and moved to California. I was very intrigued with the rich rave and musical history Southern California has, and honestly fell in love with the growing underground scene I found here. For years I was very keen to help in any way I could, especially with people that where pushing sounds I was into like Droid, Involve, and other promoting groups. At the time I was pushing my home studio very hard and at one point Matt and I decided to jam at a place I had in Hollywood at the time and things somehow clicked. A few months later we decided to join forces and Ascetic Limited / Motionen was created.

Matt: I grew up around music; I played drums for different bands throughout high school and a jazz band in college, it’s always been a passion of mine. When I was 16 I bought Pro Tools and started recording bands in my garage. But it wasn’t until I went to my first rave at the age of 19 that immediately shifted my focus to electronic music. After hearing completely new sounds and the entire experience along with it, I was determined to make some electronic music of my own. From then on, I spent time with like-minded friends who introduced me to new music and different events throughout LA, which led me to my first underground, a Droid event in about 2010. It was a completely unique experience that spiked my curiosity and my love for techno began to grow and hasn’t stopped since.

How did you then end up meeting?

Through mutual friends and going to all the same parties in LA.

Carlos: I think we met at a Droid PRIME night.

You produce/play as Motionen and you founded Ascetic Limited fairly recently. How do you guys divide the workload both on the music and label aspect of things?

Musically we work together in developing ideas. We each have our own studio, so some track ideas we will start on our own, bounce ideas off each other, then get together to finish them.

Sound design we both do well. Carlos will make edits to the structure of the tracks, and Matt as well, including mixing down the tracks, and then we agree on the final product.

The two of us cover everything. We both do A&R; Carlos has an eye for the looks/aesthetics and is great at building relationships with the artists we work with. Matt handles the mastering, promo, pressing plant, and all other business logistics.

What was the goal when you launched the imprint?

Our goal was to put out quality techno and represent the west coast with an underground sound that we felt wasn’t being tapped into. We’re both extremely passionate about the music and it just felt like the right move to release our ideas and those of our peers.

Ascetic is a label-focused project but you also do events in LA’s underground, right? What’s the vision connecting the label and the parties?

Every party we’re doing is in a way a celebration of what we’ve achieved in music, typically a record release. Some release parties, some announcement parties, and featured label party at Structures 2.5 for example. Our vision is to feature the label and bring out the artists we love to proper underground nights.

You just announced a show in LA for June, tell us a little about it!

On June 24th we are having Mike Parker, someone that we’ve wanted to have out for quite some time. Mike has influenced a lot of our sound and direction, combining art and music, and we’re really excited to be able to host him.

At the end of this month you will also both be playing a party in Detroit during Movement weekend. Is it your first gig in Motown?

We’re both very excited! This will be Carlos’ first time and Matt’s 5th year attending Movement.

Matt: Every year I’ve partied at The Works at least two nights for Blank Code and the Droid Interface party, which have been some of the best parties in my lifetime, so The Works is a special place for me.

It’s a venue we’ve both wanted to play, so we’re extremely grateful to have an opportunity to play this year.

What other studio projects do you have for the rest of the year? Any personal upcoming releases?

A couple of Motionen EP’s are soon to release, the first is on Christian Gerlach’s label Lanthan.audio.

The second is on OFF white records, which is run by HOBI, based out of Italy. We have tons of respect for both of these guys and are really happy to be a part of both labels.

And as far as the label goes, what do you have lined up?

We have two VA’s coming out this year and in 2018 we will focus on EP’s from the artists who are already represented on the label.

ASCETIC003 will consist of Craft, Wrong Assessment, Joaquin Ruiz, and Viels. Really great artists and we’re glad to support them and have them be a part of the Ascetic Limited family.

Let’s talk about Los Angeles a little. Why do you feel the underground scene is doing so well there right now?

There are a lot of people who are passionate about techno, so the support from others really helps keep the scene progress.

Matt: The Droid guys really built a solid foundation of proper techno and all of the promoters continue to surprise me with some of the talent they bring and parties they throw.

Do you think the city could ever host a Movement-type event?

Yes definitely, if all the promoters communicate and work together we can easily bring an event to that scale to the city.

Some weekends already feel like Movement weekend after-parties because there are so many good artists playing, but it’s difficult to see them all because they’re at different parties across the city.

What’s are some of your favorite go-to spots to bring new people visiting the city?

How is the food scene? Any favorite hangs?

The food scene is always great here in LA, there are so many options. One of our favorites is Café Gratitude.

What are some other things you both like to do when you’re not working on music?

Carlos: I have a little vinyl collection of about 700 records that I’ve been collecting for about 3 years now. There are many nice record stores in LA and I like spending time digging through their crates, and then playing with the records which is something I really do more for fun at home or when we have sessions with friends. I am also a visual artist and occasionally VJ friend’s parties around LA.

Matt: When I’m not working on techno, I enjoy helping others work on their music projects in any way possible. I enjoy going to see bands, which usually consist of my sister’s shows or metal bands. When I’m not doing any type of music stuff, I like making craft beer with my dad, making whiskey with friends and going hiking.