Gerry Gonza‘s reach covers dance floors across the globe and continues to reach farther and farther with each release. Making it big with DJ duo Thee Cool Cats, Gerry gives us some inside scoop on his separation from the project that got him recognition and his current career as a solo producer.

With support from artists like Claude VonStroke, Richy Ahmed, AC Slater, Shiba San, and Claptone, it’s evident to see that Gerry is still at the top of his game as he continues to pump out that top notch groovy, upbeat, bassline-driven tech-house.

6AM was able to catch up with Gerry and get some insiders on current projects, upcoming shows, and what to expect on his upcoming rare Orange County appearance.

When was the first time you received significant notoriety in your career as a DJ and Producer?

The first two things to happen that kicked started things for me happened late 2011. I was with Thee Cool Cats and we had just signed an EP to Nurvous Records and had gotten huge support from Amine Edge & DANCE on our track “Hand On The Pump”. A lot of hype and attention came from both and they’ve gone on to be some of TCC’s biggest tracks ever.

Do you feel like you wouldn’t have been as successful as you are right now if it would not have been for Thee Cool Cats?

It would’ve been different but I strongly believe in destiny and I feel it was all meant to happen. Reminiscing on my growth not just as an artist but as a person has made me realize everything is for a reason. It all leads to the next instance. Every moment has its purpose.

What was the hardest part about being in a DJ Duo and did this affect your decision to branch off as a solo producer?

Our distance sometimes made it difficult but we always worked a way to make things happen. No, it was all a matter of me wanting to do my own thing and explore my potential as an artist and a person. I think it worked out for the best as we both have really been able to achieve our visions with our individual projects and have grown much more as artists.

We’ve heard your track “Bad Bitches” (Confessions Label) on dance floors across the world. How does it feel seeing your music hit such a wide outreach?

It’s been a dream to see how much people love the track. When I originally made it, I told myself it’d be the last G House track I’d ever make as I was planning to do only Tech House and Techno with Gerry Gonza. The impact it made gave me new energy for the genre. I realized I had to keep the G coming.

You started off your career in LA, what brings you now to Arizona? How is the Arizona scene?

To put it simply, its the music, the city, but most of all the people. Every time I got booked in Phoenix or its surrounding cities, the crowds were open to hear anything and would lose it every time. The city has so many things to offer but maintains this sort of small town vibe. Everyone supports each other in the music scene here and the movement feels like a team effort instead of a cut throat game. I know this is going to be one of the next best cities and a staple in the US for music very soon.

Any upcoming releases or shows you are particularly excited for?

Absolutely! I’ve got two collaborations coming this month. One with Vanilla Ace on Homerun House and another with Juany Bravo on Lapsus for their ADE sampler. I’ll be joining BIJOU, Angelz, and Cizsak in Tempe on October 31st for their ABC Tour show at Shady Park and I’ll also be playing Goldrush Festival in Phoenix on November 18.

I need to keep the news for the future but rest assured, their are some big tunes coming on both the heavier and Tech spectrum as well as a Techno track that I am completely in love with. The next couple months I’ll be releasing a bunch of free music on my soundcloud as well so make sure to keep an eye out.

What should we be expecting at your upcoming show in Orange County?

I’ll be performing with my recently updated live set up where I’m on the decks, drums, sampler, and vocals. I’ve got a ton of newly released music to play as well as some exclusive heaters. I’ll be taking it all over the spectrum so expect to hear anything from g house tunes, tech bombs, soulful cuts and dreamy techno. It’s going to be the realest, rawest Gonza you’ve seen yet.

We thank you for your time Gerry and we’ll see you in Santa Ana on October 13th! 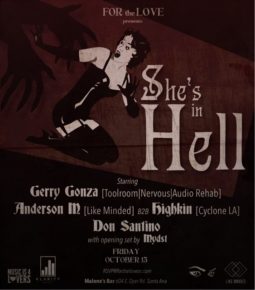 You can catch Gerry’s set at “She’s in Hell” presented by For the Love on Friday the 13th of October in Santa Ana at Malones Concert Venue. See links below for more information on event and artist. Click HERE for event info.