In Interview with Edit Select

In Interview with Edit Select

Tony Scott has been producing electronic music since the early ’90s under various pseudonyms. He established the Edit Select project, as well as its eponymous label, in 2007, focusing on atmospheric yet stripped-down, back-to-basics techno tracks for club use.

Several 12″ releases appeared, including releases on labels like Ostgut Ton and Figure, as well as remixes for the likes of Speedy J, Chris Liebing, and VCMG. Edit Select’s debut full-length, Phlox, appeared on the German label Prologue in 2014. During the same year, the artist released an edit of Teste’s classic 1992 track “The Wipe.”

Collaborations with Dino Sabatini and Mike Parker followed, as well as singles on CLR, Dreiklang, and Semantica. In 2016, Edit Select and Antonio Ruscito released the deep, spacy collaborative LP Visitors – Projections. The following year, Edit Select’s The Bridge EP was released by Soma, which had previously been home to the majority of Scott’s earlier work under the name Percy X, including three full-lengths and nearly two dozen singles. Shortly following 2018’s Horizon EP, the label released the full-length Cyclical Undulations, easily the most expansive, accomplished Edit Select work to date.

2019 has already been a busy year for Tony, his latest release the three-track Warning Signal EP, which is already receiving early support from the likes of Luke Slater, Function, Cio D’Or and Terence Fixmer, just to name a few.

With North American gigs looming, including one in Los Angeles on May 18th alongside Steve Bicknell and Headless Horseman, 6AM had a chat with the Scotsman to talk about his projects, his relationships with the States and more.

Congrats on the release of your Warning Signals EP in April. Two fantastic tracks with a lot of support from your industry peer. Do you have more releases in the pipeline for 2019?

Ha actually it’s three tracks but for some reason, I only sent out two! I think I need glasses man… or a secretary! (laughs)

As for new material of course I do, I have some Edit Select space dust speckled all over 2019!

The Edit Select project launched in 2007 and 12 years later you’re still churning out fantastic tracks, and so is your label. Do you feel the musical mission of Edit Select has changed since you first began?

Great question, the label began as an output/hobby and continued to be that for a long long time with a good roster of friends and artists doing tracks and mixes for swaps, etc. As things moved on I felt the need to release more and greater music via digital as I was losing all my profits on vinyl. I never really made any money, maybe added some music gear now and again but that was it, so now I have a full label for the rest of the year and my Selected Edits label is releasing some great tracks. It’s all very handy for my DJ gigs having so much new music always an advantage!

Also, I’m running it now with an accountant/business partner etc so people get paid and everything is legit.

Every producer strives to create their own sound, which is something I feel you have been able to do for your Edit Select project through the years. What do you feel has been the key to making that happen for yourself?

The Edit Select sound was always about only adding essentials minimizing everything but still keeping the “meat on the bone” as to term the phrase.

To be honest I have to make everything super quick so I have a really DJ friendly way of production mostly everything is already on a hard drive waiting to be messed around with… but I think patience is the answer to your question because I can’t spend too long listening, I do it fast and stop.

This may seem random, but does the music in Scotland influence your own productions?

Random indeed, I don’t think it does but maybe in other ways, it has helped me as in the weather and mentality here. I think we all strive for what we don’t have and certainly, I have wanted to escape the climate and monotone and through music it has happened. We are very blessed in this industry, it doesn’t matter what scale of DJ you are if your seeing the world for free and meeting new people and cultures you should bow down and thank the man above!

By the way, I have been to Glasgow to party during my years living in the UK… you guys are crazy fun. Do you go out to any techno nights in your home city?

Yes, of course, Ido but mostly when I’m playing there nights like Pressure at SWG3 or the infamous Sub Club are my haunts. Mostly I hang out after my spot and get shuffling on the floor… nothing like a wee dance to make you smile!

So are those our favorite hangout spots in the city?

As above… Sub Club & SWG3 venue wise and for food “The Ho Wong,” it’s my favorite restaurant. It’s over 30 years old but still the best, you need to try it!

Have you ever thought of leaving at all? Maybe to be one of the million techno DJs in Berlin?

I did think about it years ago but I’m settled here and I like the mix of lifestyle I have, it’s not full on like other cities can be, I’m in the country with a city head so it works.

I’ll be leaving for warmer climates in the next 6-10 years 100% to keep my old bones happy!

Throughout your career, you’ve gotten to travel to many beautiful cities and countries. Do you have a favorite?

I have too many to answer this question with justice, but I always get blown away by Japan and it’s technology and culture, an unreal place. Also, Tbilisi in Georgia is very unique, super cool people, amazing clubs, food, and stunning hotels. Bassiani is probably my favorite ever venue, it has everything a club should have.

Is there one still on your “to-visit” bucket list you hope to hit one day?

Yes indeed! I always was intrigued by Vietnam and I have yet to venture there. Also Iraq and Afghanistan… I’d love to see those places and meet the people, hear there side of the story.

What are three essential things you HAVE to bring with you when you travel?

Ibuprofen, Nitrazepam, and my credit card!

What’s the craziest travel/tour experience you’ve had so far?

One time I was on a flight with Lars (Funk D’Void ) after we played at Johnny Depp’s Viper Room club in Los Angeles, we took a flight to somewhere in the midwest on a small jet on the way we went through a crazy electrical storm with the plane swirling around for 30-40 mins absolutely shitting ourselves! Not cool.

Talking about travel and touring… you have some North American dates coming up this month. Can you tell us a little about them?

Yes I’m playing firstly in Denver, San Francisco, Los Angeles, San Diego, Chicago and Toronto plus some more to be added at the time of press…

I love the USA so I’m really happy about spending a few weeks over there.

What is your current impression of the American techno scene?

The underground clubbing scene in Los Angeles looks as healthy as ever, also in San Francisco… I don’t see much going on in NYC, it used to be vibrant but I think the government has made things a lot tougher over there I love the place so hopefully, I’ll get back some time soon!

Production wise I love the guys like Silent Servant, Function, etc always making cool tracks and being inspirational to others.

Any cities or non-gig activities you’re looking forward to in particular as part of this tour?

Yep, I have never been to San Francisco or San Diego so I’ll be trying out all the local specialties. Any recommendations please send them my way! Also would love to catch a basketball and ice hockey game let’s see what happens?

One last one: is haggis as good as your fellow Scots say it is?

Jokes aside, I miss haggis! 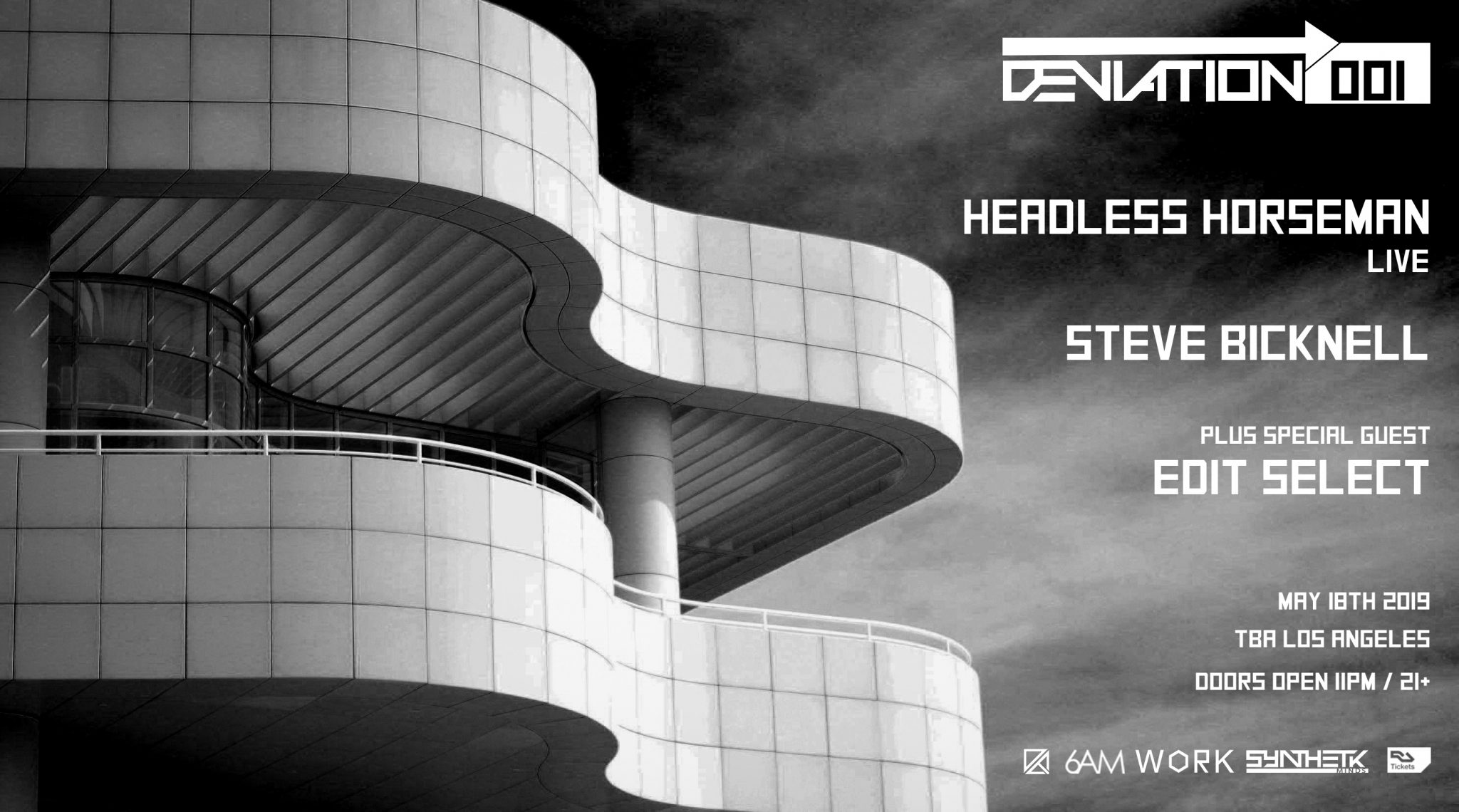