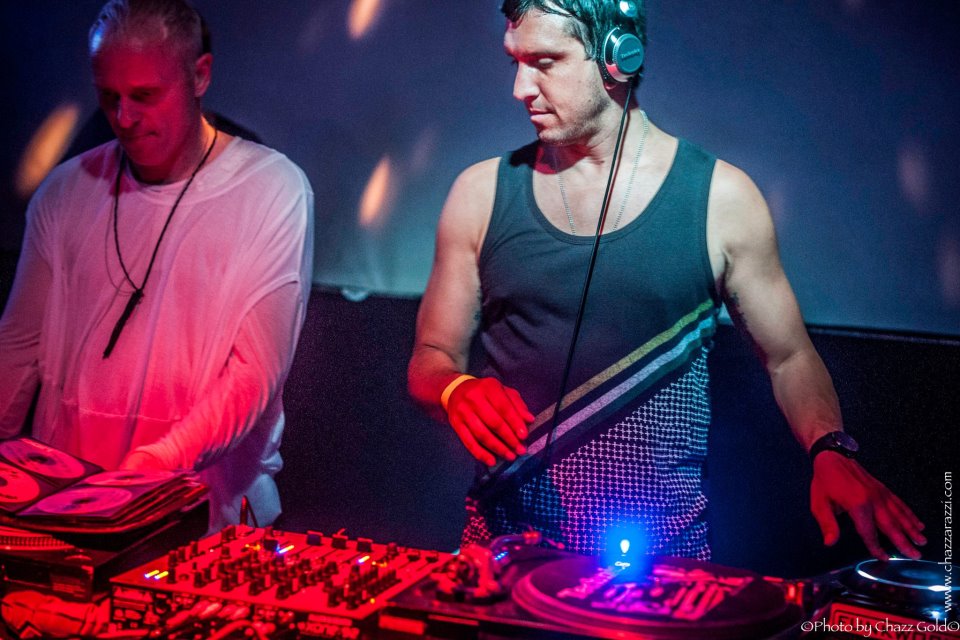 This Friday, February 9th, esteemed label Superfreq lands back in Los Angeles for a special night in the underground featuring Lee Curtiss, Dance Spirit and imprint bosses Mr.C and David Scuba. The night, which is presented in collaboration with Cyclone, goes from 11pm until 6am and promises to be the kind of acid warehouse affair you do not want to miss!

Head here for more info on how to attend and read on for our exclusive interview with Mr.C and David Scuba where we discuss everything Superfreq and more! 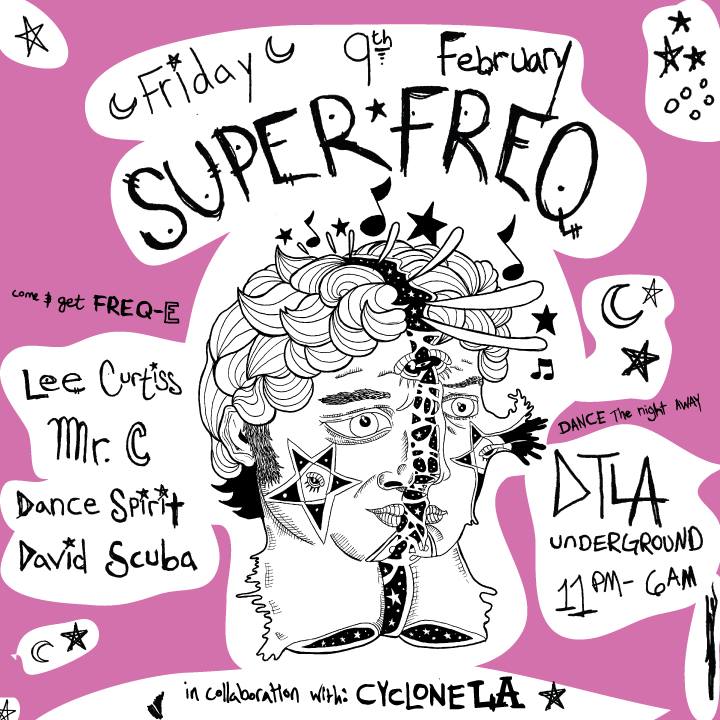 Hello Gents, how have you guys been this year?

Mr.C: I’ve been great. I took most of this month and February too off from touring after playing NYE in Bristol UK and celebrating my birthday with my twin sister on the 2nd. Last weekend I played a 9 hour set at our Superfreq underground in Dallas, which was sick and has gotten me right in the mood for Superfreq LA.

David: The year has started off great with lots some new releases and booking some dates for the Anniversary tour

Suprefreq returns to the LA underground this coming weekend. Tell us a little about the event and what Angelenos can expect.

Mr.C: We have a small intimate space for around 350 people, and the line up is dope with Lee Curtiss joining Dance Spirit live, David and I. We’re going to have more fun than you can shake a stick at.

David: As always we try to keep the music first then look for some solid production but nothing too crazy as we have a small intimate 300-350 person venue

We just entered 2018 and Suprefreq is still going as strong as ever. What do you think the secret to your label success is?

Mr.C: Unlike many labels who start off releasing cutting edge music and then after a while go a little more mainstream, at Superfreq we’ve promised not to do that and stick to our own sound, which is completely unique. We’re an acid label, which encompasses deep house, house, acid house, tech house techno and electro so we have a very broad range, however whatever of these styles we release it always sounds like Superfreq. It’s keeping this attitude to be cutting edge and trippy that keeps Superfreq at the forefront of cutting edge dance music. The label sound reflect the sound of our events, which is playful and mischievous as much as it is haunting.

David: I believe we try to stay a relevant as possible working with some more well know artist this year in addition to bringing on some new artists. We have an amazing new addition with Peter Wohelski as our label manager and partner.

How do you guys work as partners? Who does what?

Mr.C: We both muck in and share responsibilities. I oversee most of the releases and artwork, the general A&R, but David also does A&R and label direction. David sources many of our venues and oversees most events & festival showcases in the US although I help a little. I source venues and oversee events in Europe, especially in London with David helping a little too. It’s a great balance. We also have Peter Wohelski who started with us as a label manager a year ago, but he’s also now a partner as his input is next level and he’s every shade of awesome.

The music industry can be very tough, and being a label owner/partner is quite the daunting challenge. What advice would you give anyone starting the label?

Mr.C: Don’t do it. (laughs) Kidding! My advise would be firstly to start a label for the right reasons. Having a label is about art, not about back slapping so don’t be like 90% of the labels out there and simply copy. You’ll just fall into the copyist category and sound unoriginal like most labels do these days. By starting a more artistic label it’ll be harder work and at times a real struggle, but stick to your own sound and what you believe in and eventually people will get it.

Why do you make good partners?

Mr.C: Because we’re best buddies, we both have great taste in music, we both love to have fun and we’re both as mad as a big bag of hairy spiders.

David: I think Richard touched on this in his answers but .. I work on A&R for new artist and music in addition to booking events around the states and working with Richard on our Superfreq events in london.

With so much history with the label already behind you, where do you see taking Superfreq in the coming years?

Mr.C: We’re going to stick to our guns musically and continue releasing great music from fresh artists and new talent. Superfreq is primarily a platform for new talent as well as for our own material & now we have a very specific sound we’ve started to get our piers and friends in the industry to do remixes. This will continue to make the label grow organically & we feel Superfreq is right on the cusp of blowing up. When that happens we’ll take the bull by the horns and really push the brand to maximum heights, all without having to sell out our sound or integrity.

David: I think you will see Superfreq events more regularly here in LA, and some select Cities around the states in addition to some showcases on stages around the world festival circuit. The music will have the Superfreq sound but we believe we dont need to stick to one genera as long as it have the twisted characteristics and sounds we’re all in….

Richard, you just finished touring your last album. How was it? Any memorable moment you’d like to share?

The world tour was amazing and there were so many events that made is magical. D’Edge in Sao Paulo was great. Lost Beach Club in Montañita Ecuador was one of the best. London is always brilliant for Superfreq so that was amazing. Superfreq in Dallas Texas is always one of my favorite shows of the year and this tour was no exception. My Show in Sydney with the Return to Rio crew was sick. The whole world tour was a lot of fun to be fair.

Do you guys have many gigs planned for this year? Any you’re particularly looking forward to?

Mr.C: We’re very excited about this Friday. We have Superfreq’s 16th Anniversary events around the corner with London on March 17 and then LA and San Francisco in April and NYC in May. We’re going to be doing a lot more events in LA this year too.

David: I’m looking forward to playing Zoo project again this Summer in Ibiza in addition to show in Berlin this spring. We are working on multiple event this year in the states and abroad more information will be announced soon.

Richard you just released 30 Years of Mischief album on Superfreq containing 20 Mr.C productions spanning 3 decades. How do you stay young and in top shape these days?

Mr.C: I’m so happy to have been able to release this album. Many DJs fade away long before 3 decades but I’ve been very fortunate and worked very hard to stay relevant and keep changing and tweaking my sound to keep it cutting edge. I don’t know about staying young being as I’m now in my early 50s now, but I’ve always tried to keep a good balance between partying and looking after myself. I eat very very well indeed and drink tons of water. I swim a lot too but I think the main way to retain some youth is by being extremely positive always and also regular meditation.

What music do you guys have planned for the rest of the year?

Mr.C: As Superfreq we’re releasing 2 EPs/singles each month with released lined up from Jay Tripwire, Delicate Driods, Saytek, Lo and more. For myself I have a new single called “Show Me” almost ready, I’m just waiting on remixes now. I’m also working on a new single with Lee Curtiss from Visionquest. Over the next couple of months I’ll make some more solo tunes too as I’ve decided to cut my overseas travel down by 50% this year as I want to spend more time on both organizing LA Superfreq events and stepping up my DJ bookings in North America as well as making more music.

David: I have a release on Red Orb out Feb 19th, a collab with Elon on Resolute out the end of March, a remix for Doc Martin our in the Spring on Hallucinations, a remix on Das Sind Wir out in the Spring, and a original EP on Superfreq in addition to another collab with Dance Spirit

What kind of things do you both do on a day off outside of music?

Mr.C: Day off outside music? What’s that? Actually I’ve been pushing my acting a little more. I’ve just finished an amazing short movie called Breathe in which I have the lead role. It’s a great story where on the day of their mother’s funeral, two adult siblings recollect how each one dealt with a dark family secret. It’s high drama and comes with a very high end production by Illumine NYC. Post production is almost done and the movie will be submitted to all the film festivals.

David: We are both massive sports fans , so I surf work out a bunch and try to see 4-5 live music events every year.

How about together, any non-Superfreq activities you share or do together?

Mr.C: Tons. I actually officiated David and Heather’s wedding, it was amazing. We’re best mates so are always happy to spend any time together possible.

David: Since we are both super busy the time spent is usually hanging at Richard house having a beer an just getting caught up on life.

See you on Friday!