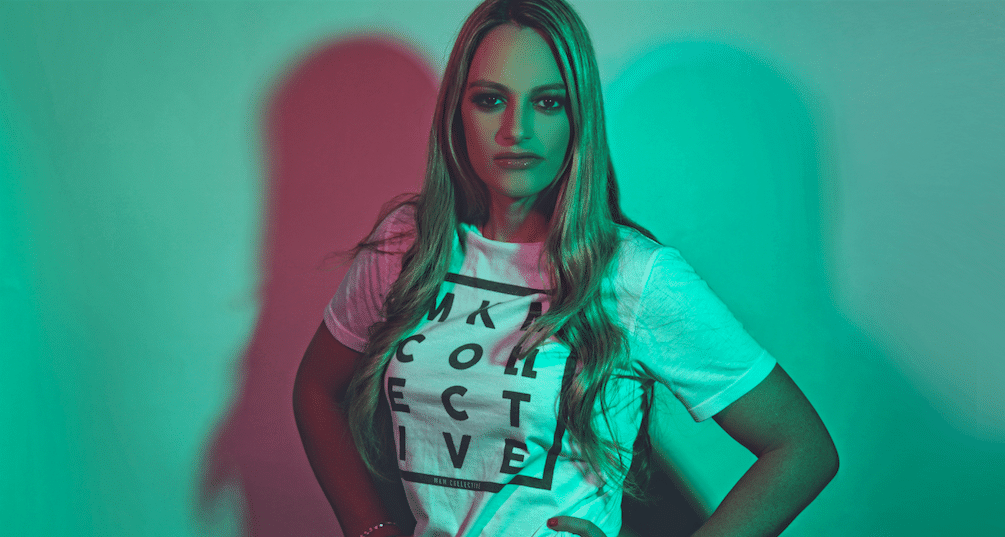 Miss Kelly Marie, aka MKM, is a lady who has been grafting hard on the house scene for many years. Having toured most of the world with residencies with Hed Kandi, Ministry Of Sound among others, managing her much in demand all girl group High On Heels, she’s also busy with production projects.

Hi Miss Kelly Marie, it’s a pleasure to chat with you today, how’s 2018 been and what have been your highlights so far?

Hi, I have actually Just got back from India (Goa) this morning. I have been based there for three months and so far every day has been a highlight in 2018. Music wise, I have been doing some great gigs – flying across to Dubai, Abu Dhabi, Delhi and a few local events in Goa. A highlight for me is going to be releasing ‘This Is Love’ on Duffnote Records, which I feel is such a perfect home for this song.

What first turned you on to making house music?

I guess it was a natural progression, I was buying and playing records from around 95, I also grew up with my dad being a musician. He’ always had studio set up and when he upgraded it he gave me his keyboard, computer and some outboard equipment, so from then I had my own set up. I became really inspired to make music when I met a vocalist called Martay through my dad. I formed a production duo with a dj producer called Danny Keith called Soul8 productions where we had Martay help write the top lines.

Who are your biggest inspirations ?

There are so many to mention and I am continually inspired by people, musicians and artists including Joey Negro, Chaka Khan, Qunicy Jones, Masters at Work, Disclosure. Micheal Jackson, Jill Scot, Angie stone, Little Louis Vega, Grant Nelson, Miguel Migs, Richard Earnshaw and Axwell, to name a few. Labels such as Yellow Productions, Soulfuric, Defected, Catch, Vega, Stereo Sushi and Hed Kandi have have also kept me musically inspired.

What was your first record release and was it difficult to get your first break into the music business?

My first release was called ‘Super Bad’. I had the track mastered and then had a load of vinyl pressed up and went round the record shops to sell them myself, It was super expensive back then to do this but it was such a great experience. The record inspired me to do so many other things around music and it really was the start of this amazing but crazy journey in the Music business.

You’ve had quite a career spanning several years, you were a resident DJ for Hed Kandi and Ministry Of Sound, what are your highlight moments from these days?

Yes, its been over a decade, crazy to think of it… Hed Kandi days were so much fun, I enjoyed that time so much. I joined Hed Kandi just before Ministry of Sound took the brand over and I guess the timing of that I was very fortunate as they like a rocket spread the brand all over the world so I spent over 3 years as there touring DJ and pretty much travelled the world with. Stand out moments include doing their first ever tour of Brazil, being a resident for them in Ibiza at El Divino, tours of Australia, BBC Radio One weekends and just having a really lovely crew each event to hang out with.

I played on pirate radio first for quite a few years, but the first gig I remember was at Aquarium Club in Old Street, London, which was a big deal for me at the time and remember how nervous I was I knocked the deck in the middle of my set and the record jumped so badly and a few people on the dance floor boohooed me .. But it obviously didn’t put me off, but I didn’t play there again until years later.

We’re now seeing a lot more women DJs taking top billings at clubs and festivals. As a female working in the music industry for a long time, how have things changed for you and have things got better for female DJ’s in general?

I feel there has always been strong women working in the industry, I have been inspired by many, its just now with social media and how things have changed there is a lot more exposure then there used to be. Its so great to see DJs, Producers and Artists that deserve the exposure and that generally things seem to be getting better for the girls. More women are headlining and receiving the recognition they deserve. There was a time where it was almost a fashion where agents and clubs especially certain countries were requesting Female DJs, which although I work mainly with female musicians and artists these days, I try and avoid that circus of models turned DJs and Celebrities turned DJ. I feel that side is getting better and so those who are true are having their time to shine.

What do you most like and dislike about the current house music scene and what would you like to see change?

I love that there is a real community and that you meet so many amazing souls through sharing the same passion and love of music, but there is a lot of ego bollocks that comes with it too. I resinate to the more soulful side of music as hopefully it cuts that out… it should also be all about soul.

Your new single ’This Is Love’ is dropping on Richard Earnshaw’s Duffnote label, tell us about the release and what we can expect musically?

This track is something Liz Jai wrote a while back when I started working with Liz with some live events with High On Heels and loved her beautiful soulful voice. Its such a beautiful uplifting and positive record. I sat on it for a while as didn’t think I would do justice releasing it myself and wanted to release it on the right label for Liz, along with wanting Richard Earnshaw to work his magic on a different mix of it… so Duffnote was the perfect home for it!

Liz Jai features on vocals, how did you hook up with her and will you be working on any future projects together?

We have another track Liz wrote to on another music idea I had, I love this lady’s voice and she is such a great writer, so Yes!

Who else would you most like to collaborate with?

Omar would be so amazing as I love everything about him as an artist! I would like to collaborate with so many of the artists in High On Heels agency who I work with too, they are all so amazing.

How do you typically go about writing a track and have you got a favourite piece of studio kit?

All tracks I have worked on have different stories to them, I will either have an idea or send it to someone and see if they have any ideas for it, or just plan a day in the studio and something will happen with it. Equipment wise I have bought many toys like Maschine, Push and a million plug ins! I have got more into using Ableton lately, which is easier for me to lay down ideas or use audio on the move. I work with Nigel Champion who is the master musician behind a lot of the tracks and he has got so many toys including a Moog.

Do you have any plans to make an album at all?

Yes, its on the cards but it’s more for the live project I am involved in, I have an EP sitting there that I was going to release which hopefully I’ll get around to soon.

Tell us a little about your all girl act, High On Heels?

High On Heels Is a collective of female artists and musicians that are brought together to perform live. High On Heels were formed in 2002, born out of a passion to work with amazing live talent and we are going strong with killer, live vocals, percussion and musicians performing live horns or strings, to a DJ set. We have literally travelled the world together and created some amazing memories together!

Out of all the places you’ve Dj’ed, what has been your favorite gig so far and where would you most like to play in 2018?

There has been so many amazing experiences so its hard to have a favorite! Some magical moments that stand out are: Japan, Air in Tokyo, Ibiza, I loved playing a the after party of Sunburn in Goa; Bahia Brazil and also playing to 20 thousand people in Egypt was an experience. I always love playing at Baltic Soul in Hamburg too, such amazing people and there’s always a vibe. In 2018 I’m doing some more bits for Nikki Beach, I’m playing in Israel where I have always wanted to travel to, so super excited and looking forward to a busy summer.

‘Love Don’t Live’ by Micheal Proctor and Urban Blues Project .. a record I have loved and played more times then I can remember, I will still play it as it continues to bring back so many amazing memories and happy vibes.

What else is going on for MKM that you’d like to tell us about?

I have been learning recently about the frequencies of sound to heal us, so that something I want to incorporate in a new project. I have also recently trained in Tibetan Sound healing with Tibetan bowls which is incredible and would recommend everyone has a session of this if you can they’re magical ! Apart from that, just balancing the travel with finishing projects, keeping healthy with Yoga good food and continue to be grateful and love doing what I do.