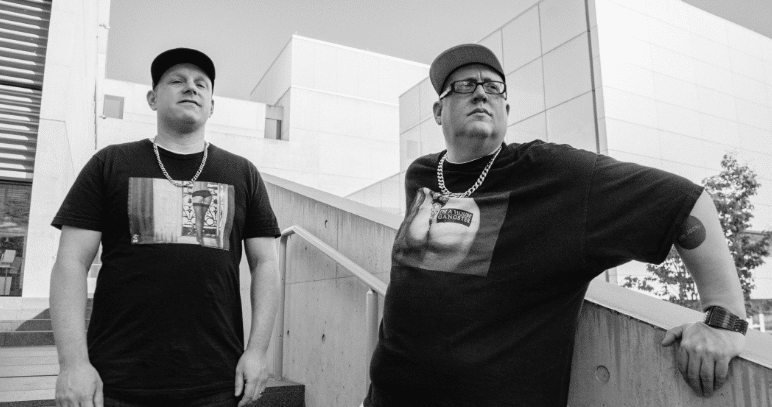 Residing in the underbelly of U.S. dance culture are Gettoblaster, staunch conservationists of the classic ghetto house and tech sounds that arose from Chicago and Detroit. They formed in 2014 over their shared background and influences, solidifying their studio bond with an arsenal of tracks perfectly engineered to keep modern crowds on the dance floor whilst maintaining the soulful elements that made them fall in love with dance music in the first place.

The infectious energy they poured into each of their releases caught fire quickly among underground dance heads, leading to the formation of their own label not long after their formation. Today, the duo maintain a heavy touring schedule, where they’re regularly seen in dark, raw spaces bringing the heat onto the dance floor.

Their latest release sees them joining forces with DJ Funk—one of ghetto house’s original pioneers and greatest purveyors. Landing on DIRTYBIRD following a jaunt at one of the campouts, “Get Dat” is a steamy piece with jacking bass and percussion that fits well into both the artists’ and the label’s aesthetic.

Curious to dive deeper into their philosophy, we grabbed Gettoblaster for a chat on all things ghetto house—with some cheeky questions at the end.

What do the words ‘Chicago house’ and ‘Detroit techno’ mean to you?

Chicago house, in our opinion, has a different swag than most cities: a “jack” factor, which translates to more “funk” than other types of house. Maybe “swing” in the percussion patterns. Detroit is a little more hypnotic, loopy. Both have great music and great warehouse-style sounds.

Can you describe the philosophy of ghetto house?

I don’t know if there is a philosophy more than a style of house music .. repetitive samples, original drum sounds of 808s and 909s, Linn drums. In our tunes we try to say things you’ll never forget, or things you may think but never actually say, or things that everyone should be able to relate to whether they want to admit it or not…if we say things in our tracks your parents think you shouldn’t listen to, then we are all about it. People love listening to stuff the parents tell them not to listen to.

Has your set MO changed at all over the years? We recall one interview you advised your goal was to get girls to go crazy on the floor, and guys would follow suit.

What is your definition of “success,” and how have you gone about achieving it?

Success is different to everyone. In our opinion, success in our careers was the first time we got on a plane for a gig and had travel and accommodations paid for, and paid to DJ. Success in life is when you wake up every day smiling excited for the day. No matter what comes, you remain happy and set in your truth.

Tell us a bit more about the making of ‘Get Dat.’ How did you come to know DJ Funk and begin working together, how was the track conceived, and what did you each contribute?

Paul:  I had a big run in the rave/warehouse scene in the late 90’s we had toured together 3 or 4 times together around the country. And continued our relationship over the years.

Both: We reunited after a long period of downtime, at the first Dirtybird Campout West Coast a couple years back. Made a studio date at good friend Bad Boy Bill’s studio in Chicago. We have numerous projects in the works, but this project, in particular, was a mixture of old folders of verses laying around along with a couple drops he did for an old radio show…so the vocals were pieced things together from a couple different places.

Funk said, “I love it that shit bangs,” send it to DIRTYBIRD! That’s all she wrote…we were grocery shopping and got the text from the A&R of Dirtybird saying, “we will take it.”

And, on that note, how did your relationship with the DIRTYBIRD camp start?

DJ Deeon was booked for it, and we rolled with Deeon to the campout. Had a blast that weekend. Met up with some old friends made new ones! One was DJ Funk!

How do you find balance from touring/producing? Anything you do for self-care like meditation, long walks, eating well, taking sabbaticals, etc?

We both really try to eat as healthy as possible. We both work out, hot yoga, swim, jog, etc.

You’re sitting on a ton of unreleased music; years worth of material. What are your general thoughts on releasing music? Do you intend on letting these tunes out into the world eventually, or do you prefer to keep your music close to your chest and instead have a myriad of IDs that fans hope you’ll pull out each show?

We love having an arsenal of unreleased tunes…when we play out one of our favorite questions from our fans is, “what was blah blah track, I couldn’t Shazam it.” We constantly reply, “that’s unreleased.“ When we make music our first intention isn’t to make it solely for the purpose of releasing it. We make music for us to DJ it. The biggest reason we make music is we can’t find the sounds we are looking for. We’re influenced by warehouse tracks, and not a lot of producers make this anymore. So we make updated versions.

How do you go about emulating the classic sounds of the early 90s? Is there a way you write music or certain gear you use to mimic this? Perhaps you start your production process by making sure your bassline is purely retro funk, and build from there?

One of the things we do to emulate old school sounds is trying not to automate too many things and not add too many decorations like white noise and extra dynamics. Try not to over-produce it.

What else is in the Gettoblaster pipeline?

We have a ton of things in the works. We have a collaboration with DJ Deeon called “302” coming on Patrick Topping’s new label, Trick.

We have a collaboration with our homie Spinstyles from Kansas City called “Dat Booty” on Tchami’s label, Confession.

We have another collaboration with Missy called “Things To Do” on Gene Farris’ label, Farris Wheel.

We have some collaborations with Lux Groove, Mike Mcfly, Torrfisk, Jey Kurmis, Chip E , Luke Andy, Zendlo, and a few others

Along with projects on Tommie Sunshine’s Label, Bad Boy Bill’s Label, Paul Johnson’s Label… and a ton of others…


Now for a lightning round of fun questions: Where do you stand on the great, “pineapple on pizza” debate?

We do like pineapple on pizza! We are foodies so we are always into different things.

Do you prefer Netflix and Chillin’, or going out and painting the town red?

We think they go hand in hand. Some think “Netflix & chill is the same as painting the town red” (laughs)

Which celebrities would make the best ones to party with?

The ones who come to our parties!

What are some guilty pleasure songs you can tell us about?

We also did a Remake Of “I’m too sexy” by Right Said Fred where we re-did the vocals and pitched it down.