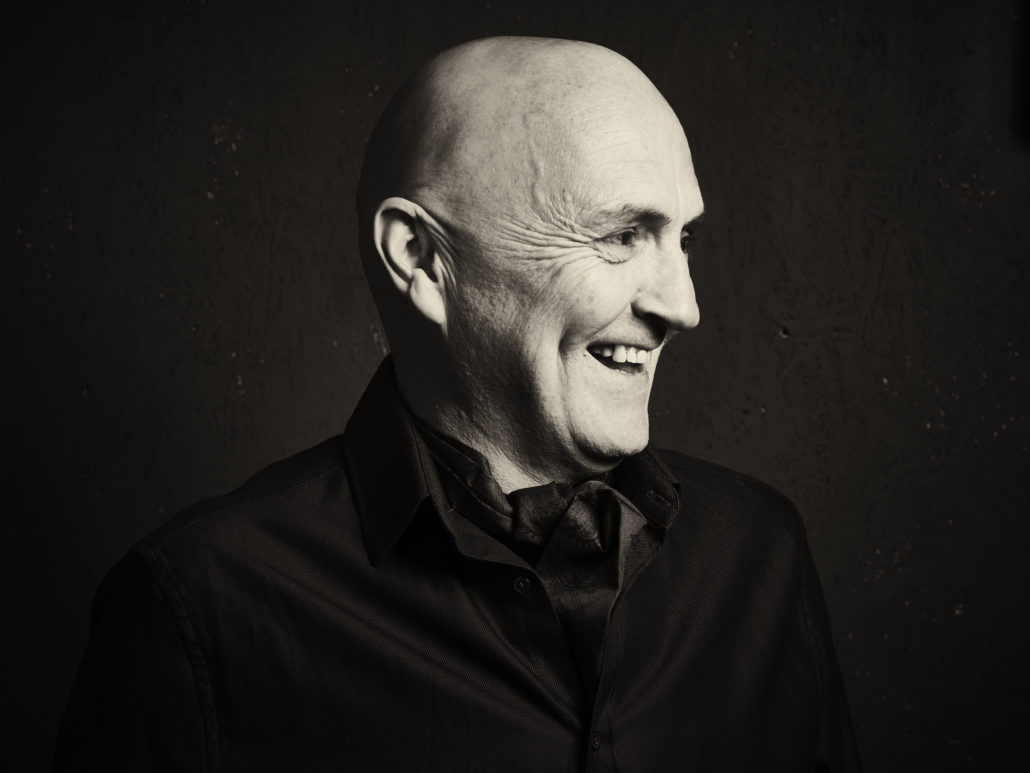 Those who make music generally start planting their musical roots at an early age, however, UK DJ/producer Brian Power is somewhat an anomaly as he reveals his debut album at the age of… 54!

Feeling inspired by the brilliant level of musicianship of this ’new kid on the block’, we hunted him down for a chat to find out more.

I’ve been a little anxious and very excited as 2018 is a big year for me as I’m releasing my debut album.

Please tell us a little about how you first got into music, who did you listen to growing up and did they have an effect on how your own music sounds today?

I grew up spending weekends in Catholic and Working Man’s clubs in the UK where children were allowed, so there was music in my life for as long as I can remember, my father would occasionally get up and sing too. As a child I loved all types of music, my first couple of 7” records I bought were the Jackson 5 ‘Rockin Robin’ and Rod Stewart ‘Maggie May’. I remember at a very early age sitting down with my mother with a cassette player and using the pause button and mother writing all the words to songs so I could learn them. As a teenager I fell in love with Soul Music – all the now legends such as, George Benson, Luther Vandross, Teddy Pendergrass and Barry White. Their music was full of big production and a similar high bar of quality has been set for the music we make at Soulhouse, with full songs and live musicianship.

So let’s not beat around the bush here, you started your music career at the age of 50. We think that’s quite an inspirational, better late than never some might say! So what was you doing before and what inspired you to finally take the plunge and get creative on the decks?

I am actually a Managing Director of a construction company and around the age of 47(ish), I got some decks, bought some vinyl and played records for fun in my Loft. I then went to the local record shop and asked the owner, A DJ, to teach me how to mix. Later my wife invited me to a friends party as the DJ played all the music I loved from Luther Vandross to Harold Melvin And The Blue Notes. I introduced myself to the DJ, Colin Stanley and we hit it off, so much so that Colin invited me to warm up at his gig in Brick Lane.. and that’s where my own DJing story started.

So how did it go?

The night was called Vintage Bean for around 40/50 people, I played the warm up set with Soulful House and when i finished the crowd gave me so much love. Will the next Dj said I had a real vibe going and to carry on, so I continued for another hour and half before Colin took over. It was amazing, I will take that memory to my grave as one of my most happiest and humbling experiences.

You’ve since been playing all over Europe and Ibiza, what have been the highs and lows of your adventures so far?

Playing our tracks in the main room at the Ministry Of Sound at the Mi-Soul Xmas Party and seeing the crowd singing the words back to me was magic. And as for a low, well, playing a set at 7.30 pm to 10/20 people in a room that can hold 400/500 people at a weekender is depressing. However, when I finished a man came over and said “great set mate, its a shame there was no one here!”. (laughs)

Recently you embarked on the world of production and in addition launched your own SoulHouse Music label, was this a natural progression?

Yes it was! When I first started doing the radio show, there was 1 track from the early 80’s called ‘I Really Don’t Need No Light’ by Jeffery Osbourne that I decided to remake. It was put together with John Robertson using live Musicians and then the vocal was added by Lloyd Wade with an additional remix from DJ Spen. This really blew up for us and my radio plugger Steve Ripley suggested I do another. London’s Toni Economides mixed and mastered the track and I met Mike Patto whilst visiting his studio and immediately had a good feeling about the 2 of them and suggested we make a track together. This was the start of a great working relationship for us with out first joint project being John Robertson’s ‘Amber’. Mike and Toni have been in the music industry for over 30 years and for them to respect my direction and tell me I have a good ear, being a newcomer to all this was motivating. I have a feeling we’ll be working together for many years. I set up the SoulHouse label as a home for our fruits of our labour so we could have complete control over our creative output.

So who can we hear on Soulhouse and what’s your musical manifesto with the label moving forwards?

Moving forwards, we have EP’s coming out with Marc Evans, Kathy Kosins, Michelle John, Mike Delgado, Ronnie Herel and more, along with tracks with Lifford, Soulful Emma Louise, Shaun Wright Phillips, Mary Pearce and Shiv. I’m actually working on a track that will really fit well with Omar’s Tone, so when its done I’ll send that to him. We will always only work on projects that touch us and we feel we can do justice. On the whole SoulHouse Music has been set up as a platform to promote Soulful talent. The music we produce in the studio will also be transformed into a full live show, we have formed a band and will be performing at some intimate gigs in London later this year.

You’re about to release your debut album ‘Soulhouse Vol.1’, full of lots of collaborative productions with Michelle John, Marc Avon Evans, Lifford, Sartorial, Shiv, Rebecca Scales, Lloyd Wade, Ronnie Herel and Mike Delgado, along with remixes from Richard Earnshaw, Eric Kupper, DJ Spen & Gary Hudgins. That’s an impressive line-up, so how did you go about selecting the artists you wanted to work with, what did you set out to achieve with the project and are you happy with the end results?

Some I hunted down as I was already a big fan and some arrived by happy coincidences and lucky twists of fate I guess. I work a lot on instinct, an example being how Lifford came to work with us, I wrote a track called Amber and had the instrumental sitting there. Gordon Mac (Mi-Soul radio boss) showed me a clip of Lifford singing an acoustic set in studio 3 which blew me away. I immediately contacted Lifford and we laid the track down with BV’s in just 3 hours! I often say this when you are working with gifted people my work is easy. That said, on the whole It was a lot of work for us all, with some tracks 4 months in the making, but as a team we’re very pleased with how it all came together and can’t wait to make more!

What are you own personal highlight tracks from the album?

As it’s my/our first album, its hard for me to highlight any particular part of it as I actually love it all. it’s a body of songs with soulful at their core and the dance floor in mind. They are written from the heart and tell all sorts of stories of real love and life experiences which evoke all kinds of emotions that we hope will connect with a few of you. Everyone who has worked on writing and recording the project have been amazing, from Mike Patto (band Musical Director / keys), Luca Farone (Guitar), Ernie Mckone (Bass), Nickl Van Gelder (Drums), Toni Economides (drum programming studio) and I can honestly say its been a blast in the studio. We do have a lot of fun which I feel also translates in the music we produce. I use the term ‘we’ as i feel this is a team effort and its just that my name is at the forefront as its my inspiration and passion that is driving the whole thing forward.

Soulful house has a been branded somewhat a ‘dad house’ genre for many years with generally a much older audience than most other contemporary dance music genres. There are a lot of new producers now digging deep and using classic big soulful vocals and clubs nights such as Glitterbox and Groove Odyssey smashing the soulful and classic sounds, is this a sign of a Soulful House resurgence on the cards do you think?

I have always felt that Soulful House has never had the exposure that it deserves. Maybe one of the reasons electronic music has been the producer’s more popular choice to make in recent years is because of finances as it can be made for very little money on a computer in hours. Where as working with a big production with a lot of musicians and songwriters takes time and costs money. You only have to look back to the 80’s and see the classic productions of the likes of George Benson and Quincy Jones, etc, and a lot of new music is now sampled from that era. As for a resurgence, I’m really not sure, but the likes of Glitterbox and Groove Odyssey are certainly doing a great job of promoting Soulful Music to the younger crowds.

So is it your mission somewhat to turn a new generation on to Soulful House?

I want to spread Soulful House to as many people as possible as I feel its not getting enough attention and play, so to answer your question, yes.

You’re also heavily involved in radio and host a radio show on Mi-Soul, how’s that going?

It’s going great thanks, I love it! My show is on the first Saturday of the month 9-11 pm with lots of soulful sounds spanning house, disco and everything in between, it’s straight after a hero of mine Paul Trouble Anderson. I love doing the show, but not as much as working on our own productions.

What do you love most about your job?

Producing! The feeling I get when we get a groove going on a track in the studio, you can’t beat that moment when you can feel the excitement surge through your body.

2018 a new year full of hopes and aspirations.. have you anything in particular you have set for yourself to accomplish this year?

I work very organically and the label seems to be rolling along nicely, however, I would like to write and produce also for some more established/bigger artists as I feel we can then maybe together put Soulful House back in the mainstream, where I personally feel it belongs. I’ve also got several festival bookings lined up for this year, so I’m hoping to smash those – you can catch me at Liverpool Disco Festival, Suncebeat in Croatia, Margate Soul festival and Southport Weekender at Finsbury Park.

Finally, which dance track holds the most precious memories for you?