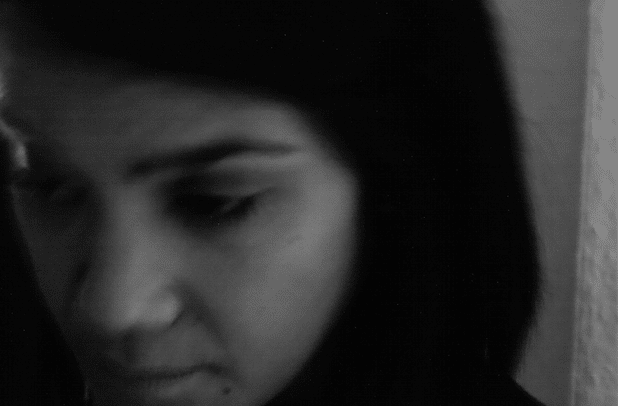 Forgoing traditional melody and song-writing, Esker’s distinctive sound focuses on the interplay between noise, texture and rhythm. Voitax is happy to present her stunning debut Destruction Time Again EP, which was assembled from various recording sessions over the past two years.

Formerly a drummer and guitarist in various bands in Melbourne’s noise scene, the influence of her past is evident in this record – a combination of processed guitar, mangled samples and bizarre, ghostly synthesis form a deep and complex sonic space. The effect of almost a decade in Berlin is just as clearly heard in the EP’s thumping techno pulse. Wielded with a drummer’s feel for timing and meter, phasing rhythms, crunching lo-fi percussion and thundering kicks provide a solid backbone. Having become absorbed in techno culture, this is her contribution.

The EP opens with “Pleura”. Here, Esker masterfully splices together various field recordings and drum machine takes into phasing polyrhythms and shifting, distorted atmospheres.“Tance” follows next, it is a haunted track, designed to float around the listener’s head. Delving deep into FM and granular synthesis, Esker creates otherworldly textures that sound like a cross between occultist chants and Whitney played underwater.

The title track is frustration funneled into artistic creation. Bedridden while recovering from surgery, Esker was stuck in a Berlin apartment for weeks as disruptive renovation work was carried out in the apartment next door. The result is a bizzaro, yet highly explosive mix of construction recordings and vengeful mic work, mixed in and out of a well-known R&B hit that has been decimated by heavy effect processing. Not your standard club hit!

The closing track “D-E-F” is a techno whirlwind. It is minimalistic in the number of sonic elements audible at any given time, but each is brandished with such devastating effectiveness that the pressure keeps climbing and climbing. Bleak, stark and foreboding, it is a nod to the heyday of 90’s warehouse techno and simultaneously, a step into imagined dancefloors of the future.

We had the chance to ask Esker a couple of questions as she readies for this fantastic debut release.

Where and how did you get in touch with music? Any particular moment or experience worth mentioning?

The first record I remember listening to was David Bowie’s “The Rise and Fall of Ziggy Stardust and the Spiders from Mars” on my dad’s Marantz system (which I definitely did not appreciate at the time!). I was probably four or five, and the kooky lyrics, weirdly catchy melodies, and range of instrument sounds fascinated me at such a young age.

Berlin let you discover another face of music. Which characteristics attracted you to to move on to this direction? Is there any electronic music producer, friend or event which signed you personally and musically speaking?

My first ever visit to Subland (now sadly closed) opened my eyes to a side of electronic music that I found really appealing – the music was raw, rough, dark and really freaking loud!

Eventually I discovered labels like Zhark, L.I.E.S., Avian and Downwards – the more kind of textural, noisy and ambient stuff. Through those labels I found a connection to my past playing in noise bands.

I also developed an appreciation for the production techniques and sound design used by electronic artists, and began to see music-making in an entirely new and exciting way.

You’re now about to release your debut electronic music release. Is there any inner meaning behind the release you’d like to share? What is the message behind your music?

I wouldn’t really say there is an inner meaning or message. I never have any specific objective in mind when I’m working in the studio, since I prefer to make music in the moment. A sketch usually starts with a single idea – it might be a take from one of my noise machines, a drum machine jam, a field recording or messing around with a synth. Then I like to use other instruments to work around this idea, to create the sort of sonic space that begins to form in my head. I don’t really think of music in terms of harmony, verse, chorus or anything like that… It’s more about tones, textures and rhythmic interplay.

You can pre-order Esker’s Destruction Time Again here or here.