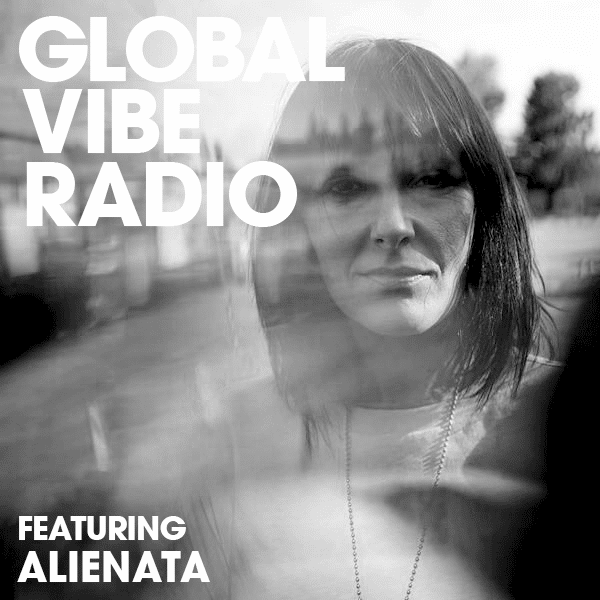 It’s Black Friday and we love gifting quality music for the holidays, so here’s this week’s Global Vibe Radio mix from the one and only Alienata.

Berlin-based Alienata began DJing in 2004, the Spanish artist is a former philosophy student with a particular interest in mysticism. Self-described as sound obsessive, her DJ sets span from electro, ACID, dub, IDM, dark disco, jackbeat, hypnotic techno, industrial atmospheres, breakbeats, cosmic jazz, always influenced by Detroit and Chicago sounds. In 2017, she started her own imprint Discos Atónicos where she can materialize all her varied inﬂuences.

We invited Alienata to join our Global Vibe Radio mix ahead of her trip to Coruña, in Spain, where she will perform at the 2019 edition of Fanzine Fest. Joining Alienata on the lineup is an eclectic selection of well-established artists such as Levon Vincent, The Horrorist, and Dorian Concept, all performing between Dec 5th and 7th.

Tickets for Fanzine Fest to catch Alienata can be found here.

Hi, thank you for the mix! What can we expect from it, sound and mood-wise?

Hi there, thanks for having me! For this one I wanted to record something more techno orientated. This is a mix you could hear me playing in a club any weekend. I tried to build a good balance between nice lush pads, dark rhythms, techno and high energy! I especially like how the end came out! I recorded the mix in a mega spontaneous way at home in one take with my turntables and one CDJ-900 NXS. I was jumping & dancing! That was the mood!

Any track, in particular, you were excited to include?

Mmmm… actually all the tracks I included it here made me feel proper excited! (there is no filler track or hinge!) But I really really really wanted to use one track that a friend from Portugal sent me last week called “Free Block” (Shout out to Photonz & Shcuro!) I played it as the opening track. When I heard it for the first time I just fucking love it and it was on my brain like in a loop, I had to play it yes or yes! I’ve also included one of my favourite Laurent Garnier songs that I’ve recently rescued (once again) the timeless “Crispy Bacon”, oh boy, I’ll never get tired of playing or dancing it.

Your sound is eclectic, but also cohesive. Yet, at the bottom of it all, I think your sets can be summed up as unexpected, crazy and weird, in the best sense of the word, of course. What do you hope to convey and create when performing in front of an audience?

Yeah, I super agree with you (I couldn’t say it better: crazy, weird and unexpected – thanks!) and that’s exactly my intention when I’m performing: to try to surprise the audience and play with all my different energies thru the music… I want them never to leave the dancefloor. You’re Spanish born but have now lived in Berlin for a while.

Have you ever thought of moving back?

Honestly, I think about it sometimes. I love living in Berlin but the lack of light for many months kills me and it makes me feel down (for no reason) I am not going to leave for the moment. I still feel excited living here. But I imagine the future moving somewhere relaxed in Spain near to the sea.

What are your thoughts on the current Spanish techno scene? Are there any particular artists from Spain that are getting your attention?

I think the scene in Spain is going through a good time. It’s my impression from the outside. But I don’t live in the country and I still miss some stuff for sure. There are many veteran artists who have dedicated their entire lives to music and who deserve all my respect. People like Oscar Mulero, Exium, Ángel Molina, Reeko, Pelacha, HD Substance, Arkanoid, David Verdeguer or Fon from Subsist Records. Other artists or collectives that capture my attention are: P.E.A.R.L., JC, Kastil, the people from Util Records & Cercle in Barcelona, Héctor Oaks that is on fire at the moment, my good friend REKA, Annie Hall, Dinamite, Frigio Records in Madrid and of course all the “techno soldiers” in Valencia. But I’m convinced there are a lot of artists I don’t know who are super interesting.

I have noticed that crowds are widely different all over Europe. Where have you experienced some of the best crowds while touring?

They are! And this year the winner is the crowd in the UK. I’ve done a lot of touring around the country and its always pure fire.

You’re playing Fanzine Fest in Spain next month. What is your experience performing in Northern Spain?

Oh yes! and I’m pretty excited! This is going to be my first time playing and visiting Galizia: can you believe it? Unfortunately, I haven’t had the opportunity to perform like that much in the north of Spain. I only did it a couple of times in Asturias and like 3 years ago at Mugako Festival in Vitoria. My last time was just a few weeks ago at Lanna Club in Gijón and I had a great time, very very nice crowd and place.

For me what makes a good back-to-back set is fundamentally “the respect”. I have had some bad experiences where the other artist didn’t seem to listen or understand that what we were doing it was a discourse between two and when that happens, there’s no flow. It’s like you’re zapping between two channels. I don’t like that feeling, it stresses me out, it’s not creative.

Is there someone you’d love to play b2b with one day?

I have to confess that after having the opportunity to play with Mr. Dave Clarke, I lost the fear of the big back-to-back! There’s a lot of artists I’d like to do it with because I feel like we could fit in and it could be interesting and super fun. To name a few: Ron Morelli, Helena Hauff, Marcel Dettmann, Solid Blake, David Vunk, I-F, Afrodeutsche and of course DJ Stingray!

Which artists do you look up to these days as far as inspiration for what you do both in the studio and behind the decks?

There are a lot of artists who inspire me and I think it’s impossible to draw a list in just a few lines. Phew. From Esplendor Geométrico to Stenny. From Biosphere to Dasha Rush. From Vladimir Ivkovic to Oscar Mulero. From Umwelt to E.R.P. From DVS1 to Bloody Mary. Seriously, many artists are the ones who inspire me on many levels.

You were a former philosophy student right?

Did you have a preferred branch of philosophy that captivated you the most? Yeah, I graduated in philosophy a few years ago. I was really interested in the Continental Philosophy of the 20th century, especially in the French poststructuralism with Lacan, Derrida, Deleuze or Foucault. I, too, had a weakness for Nietzsche’s writings (and I still do)

Without a doubt, Michel Foucault (the philosopher who dared everything) and two of my favourite quotes from him:

“Do not ask who I am and do not ask me to remain the same.”

“You have to be a hero to face the morality of the times.”

What do you think about stoicism and its application to modern life and the music industry?

Good point. I do agree with many of the Stoic principles. Our modern way of life causes us stress all the time. We suffer stress because of everything, because of what we have and what we don’t have, because of what we think is going to happen but it hasn’t happened yet. Stress from not being able to control many situations… Stress stress stress! One of the main points of the stoicism says that you cannot change things outside of your control, but you can change your attitude. It’s the practice of mindfulness: if you become frustrated with events outside your control, you are wasting energy and creating negative emotions.

So long as we can control our attitudes, reactions and what we really need (and want) in life, our mind can become impenetrable and we can deal with some of our biggest modern enemies: stress and our consumerist society where it seems is created more desire than it fulfils.

Our brains are collapsing with all the amount of information we’re constantly receiving from all angles and that it’s impossible to process: every week I feel like I need two more ears to be able to hear all the music around me that I can’t digest completely because I’m hours away, we are becoming “the snippet generation” Click-click, next one. Also all the social media major factor and how it affects us (when we are contemplating all the time the life of the others and sometimes we can no longer distinguish reality from the unreal or fake).

So at this point, we all should practice a little bit of stoicism: it will make our lives a little more bearable and quite a bit more creative.

I know mysticism was of particular interest to you. Does that have any correlation with your passion for the darker sounds of electronic music?

Definitely. The music itself seems to me to be the most mystical of artistic manifestations. is what’s always fascinated me about it. I’m not sure whether or not there is a correlation in my obsession with strange sounds but what I’m clear about is that there is music that abstracts me in such a way that I can disappear with my mind. My family used to call me as a child: the mystic!

Probably yes but I can’t tell you right now!