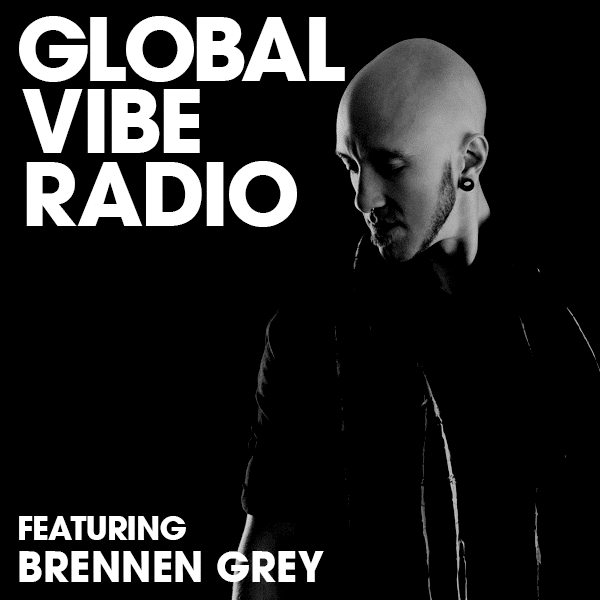 With releases on labels such as Carl Cox’s Intec and Pleasurekraft’s Kraftek imprints, Brennen Grey‘s rise as a producer and DJ has been impossible to miss.

Pushing a sound that is both hard and progressive at the same time, it is no surprise that Brennen’s tracks have found widespread support from artists such as Carl Cox, Adam Beyer, Pleasurekraft, Victor Ruiz and Enrico Sangiuliano, just to name a few.

Enjoy the mix and our exclusive interview with Brennen below and if you’re in LA, be sure to catch Brennen at WORK on Nov 2nd. Tickets and info for that event can be found HERE.

Hi Brennen, welcome to the GVR family and thank you for the mix! Can you tell us a little about where you put this together and what you hope to communicate with it to our listeners?

Love you guys, it’s an honor! For some itʼs an escape, or a gym set, maybe road trip soundtrack, or the motivation you need to get through your school or work project! It is always different to each listener so what I hope to communicate means little, but I do hope it inspires you to come lose your mind on the dance floor!

Any standout tracks we should particularly keep an ear open for?

There are a few previews of unreleased tracks coming out early next year and quite possibly my favorite track Iʼve ever made… but also a few tracks from really great producer friends of mine that deserve the spotlight like Stephen Disario, I Am Bam, Atroxx…

Do you feel this mix represents the energy and style of your sets?

Of course, every set is different, the room, vibe, slot time, etc all play a factor, but as a whole yes this is a good representation!

Talking about sets, you’re performing in LA on November 2nd alongside Pleasurekraft for our WORK event series in collaboration with Synthetik Minds. Are you as excited as us for this one?

More!!! Iʼve been a fan of your events for ages, and even though Iʼve played a bit in LA this year for some reason this feels more like coming home than ever! Iʼm also really excited to hear Pleasurekraft unleash a warehouse set, and we have a pretty special surprise for everyone that night!

I know we have hung out on warehouse dance floors a few times in the last couple of years and we have been trying to make this booking happen for a while now. How do you feel about being on the other side of the booth for this night versus performing in a club, for example?

Warehouses have always been my happy place, dancing, playing or both. I cut my teeth in the illegal underground raves of the late 90ʼs in Chicago, so for me the rawer the better… but I will admit that there is a good handful of clubs around the world that are standouts. They have nurtured the “dance floor first” mentality and I love playing/dancing with them too!!!

You and Pleasurekraft go way back and have shared many lineups together. How did you first meet and what’s your relationship like?

Itʼs honestly not that “way back” it just feels that way because of how well and instantly we clicked! We met just a little over a year ago! Heʼs a truly art-first, no pretense, check-your-ego-at-the-door kind of human which is rare as hell in this industry… and when you find those you keep them close!

We first met at the Factory93 Carl Cox gig we were on… I opened and he went B2B with Carl that night! To make a long story short, we just talked a lot of shit that night and were on the same page and kept in contact!

What can attendees expect from this night? Any surprises in store?

I think this night is going to be really special! I know people flying from London and Berlin just for this one! Neither of us are holding back in any way and the last time I saw Pleasurekraft let go like that it was one of the best sets Iʼd ever heard so Iʼm excited! And yeah thereʼs an AMAZING surprise at the end of the night but if I told you it wouldnʼt be a surprise anymore, would it?!

The team at Insomniac have undoubtedly been an integral part of your growth as an artist and, in my opinion, they do an important job funnelling new listeners and dancers to the more underground sounds of house and techno. How would you describe your relationship with them and how important were those gigs to you in your career?

So, it’s unique, and not a simple answer but yes they have been truly good to me and supported me before damn near anyone else outside of Carl! And for that Iʼm sincerely grateful! 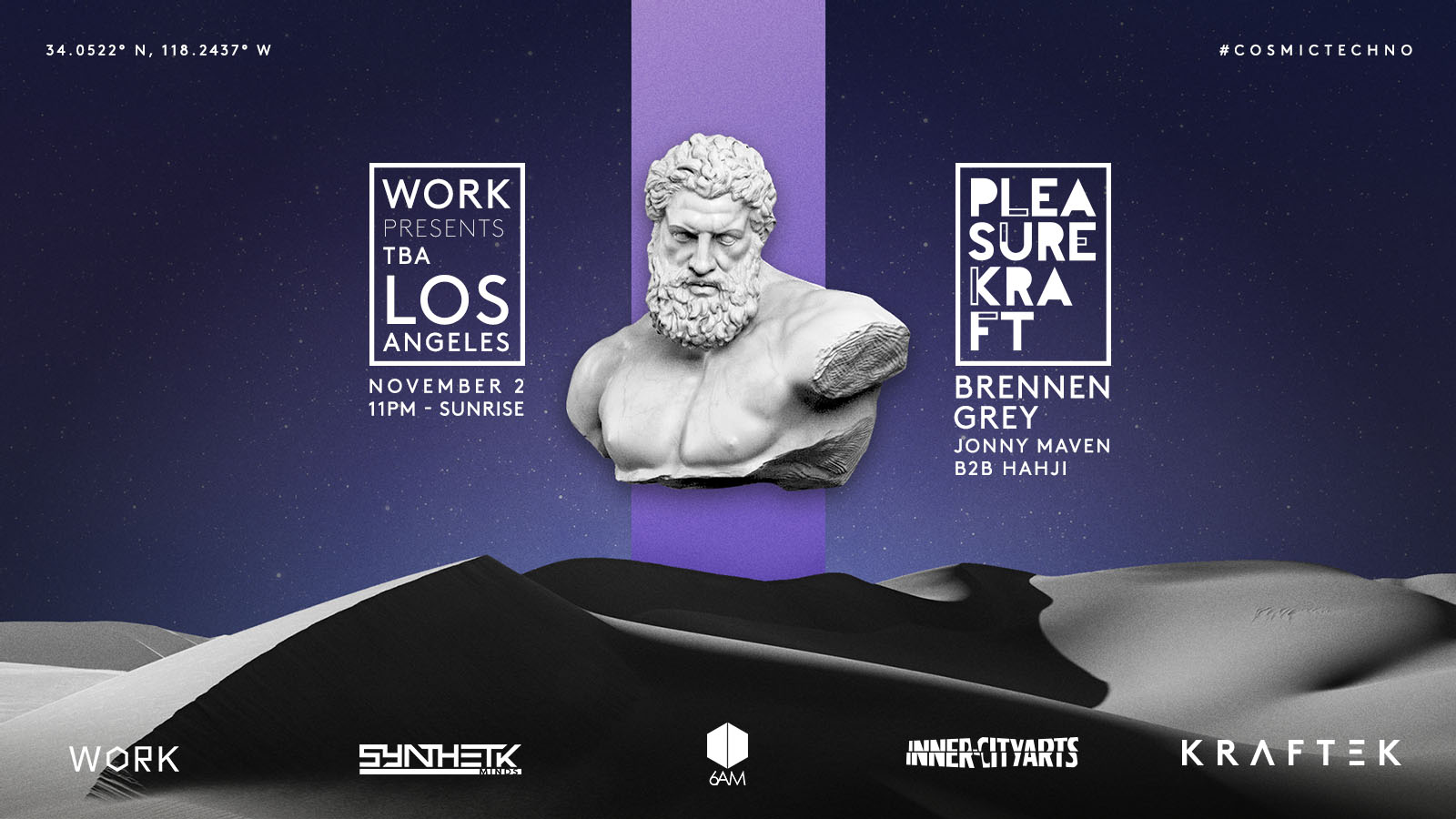 Do you feel the Insomniac label has in any way made it harder for you to be credible to those in the techno scene that consider labels important? And what is your take on such labels anyways?

Fuck a label… Iʼve been really lucky to make the music that I love without any perceived barriers from fear of credibility backlash, mostly because I donʼt care, but also because the slow but organic fanbase Iʼve acquired loves the music and is beautifully open-minded!

In terms of credibility, it is often about perceptions and labels, rather than actual sound and musical output… which is crazy and wrong. How would you describe the music you produce and play to someone who isn’t quite versed to it?

This is so spot on… The ironic thing about the people spouting about credibility is that most of them are uber-fans of DJs who donʼt even make their own music… or are just massive because they had a manger pump $4k a month into social media promotion. But I digress… to answer your question, I make high energy techno. When I describe it to people that arenʼt in the dance music scene I usually just say “very
kick drum-heavy but I try and tap into something emotional and tangible” and then I change the subject! (laughs)

The techno scene is in constant evolution, and that means a lot of online bitching about all sorts of controversial subjects. Let’s take a positive approach: what do you like about the current techno scene both worldwide and here in the States?

Oh man… yeah there are some really depressing people/opinions out there. But from my view weʼre in one of the most energetic, forward-thinking times in the scene… I think weʼre slowly starting to get back to a time where people are hungry to educate themselves on lesser-known artists rather than being spoon fed the big names over and over again! Add the fact the some of the high DJ fee bubble has burst a bit youʼre seeing more and more underground gritty shows/venues pop up and its really exciting! Europe’s scene has had dance music in its DNA since its inception so thereʼs nothing quite like it but the US scene is pretty incredible right now, there’s a hunger and passion for it that is palpable!

Recently I saw your tweet about someone who reached out wanting to work with you after they rejected your offer early on in your career. Going off of that, what key piece(s) of advice would you give young and aspiring techno artists in the United States based on this and other experiences so far?

There is NO FINISH LINE… it’s just an endless staircase… one step at at time! And I canʼt stress this enough! So many of my producer friends think that a label signing, manager, or agent is going to solve their problems and equal semi instant success… it’s just another step and you gotta keep climbing! From my experience there are some really really rough times, but if youʼre patient at some point itʼll start feeling like youʼre finally winning the race! Also throw your timeline out the window! If you really love this shit it doesnʼt matter if youʼre successful in 2 years or 10.

This career never abides by your timeline so just focus on making good music and itʼll happen at some point!

In terms of experiences, what have been some of your personal highlights of 2019?

I could name a handful of incredible shows, most of which, the people reading this have either heard or were at, but honestly my personal highlights were bonding with some of the artists & team Iʼve respected for years. Iʼm a pretty solitary person so when I connect with someone itʼs a special rarity!

Can you share your craziest on-tour story so far?

Ummmmmm the REAL crazy ones are a little to sexual and a gentleman never tells (laughs), but here are two good ones:

One time I got so wasted that I walked into the wrong hotel room after a gig, it was one number off but the occupant left the door cracked and was taking a shower and I strolled in thinking it was mine and passed out face down in the clean bed and woke up to the the guy screaming like a little girl in his towel…
(laughs) I apologized profusely through a very confused and hammered mumble!

WOW, that’s awesome! How many hours do you spend in the studio now?

Well I currently donʼt have a studio so all my music is made on the road but let me just say when I have a studio again it’s over for you bitches (laughs). In all seriousness though I probably make about two tunes a month right now and each tune takes a day to make and about a day to fine tune.

What do you do when you’re not working on music?

A lot of travel, I used to skydive a lot but I havenʼt done much of that lately sadly. I rock climb a bit, read a lot and I spend a lot of time doing sound design geek sessions that arenʼt with the goal of finishing a track.. just make sounds… sift through third party patches, get to know synths, experiment with new production techniques etc.

What would you say your favorite non-music-related hobby is?

Is there such a thing? Just kidding, I used to be an advertising photographer, a trapeze artist and a stunt guy… I stay pretty active, and aside from the one off adrenaline junky stuff, I still love creating
all different kinds of art. But honestly if you put me anywhere near the sun, sand, or ocean Iʼm a happy man!

And your favorite meal?

Picking one is like asking what’s your favorite song… impossible… but if I had to pick a regional food Iʼd say Thai food probably!

What is your biggest pet peeve?

I have a feeling that you’re the kind of person that has some really set career goals. what are some you’re willing to share with us?

A couple big ones are a BBC Radio 1 Essential Mix and a back-to-back with Carl, none of
which are on the radar but a man can dream! Other than that a dedicated fanbase, make quality music, and tour regularly is both the career and the goal!

Alright Brennen, thanks for the mix and interview… we will see you very very soon in LA!