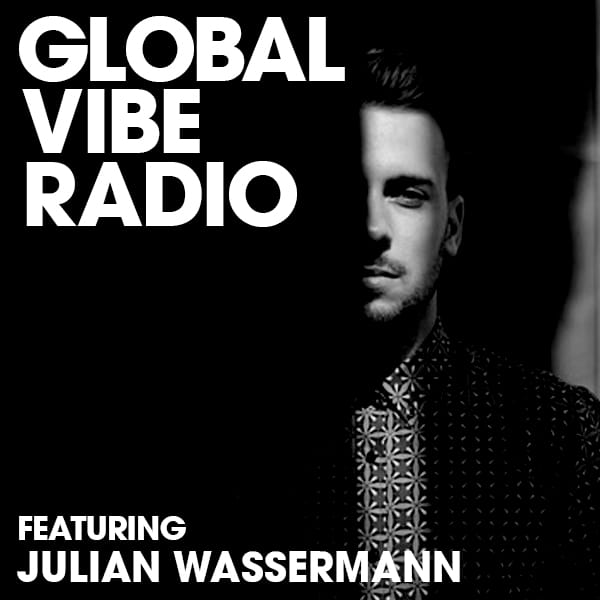 For this week’s episode of Global Vibe Radio we welcome Munich-based Julian Wassermann.

With more than 50 releases on labels like Stil vor Talent, Senso Sounds, Einmusika and his Wassermann imprint, all characterized by an infectious sound that blends progressive with deeper techno sounds, Julian is one of the most exciting up-and-coming acts to follow within his genre.

This past November Julian Wassermann has unveiled his brand-new production, “Painfully”, a slick record laced with the German’s signature melodic techno style which you can find and listen to here. Packed with atmospheric chord patterns, “Painfully” follows the recent release of Wasserman’s two-track EP, which featured both “Extase” and “Manie.”

Best known for his rich tones and gruff floor-ready elements, Julian Wassermann continues his meteoric rise through dance music, with recent performances at the likes of Airbeat One, Echelon, and iconic Berlin venue, Watergate. The Munich-based DJ and producer, who has received support from legendary BBC Radio 1 broadcaster Pete Tong, has also become the subject of backing from the likes of Laurent Garnier, and Solomun, releasing across several well-known imprints such as Stil vor Talent, Senso Sounds and Einmusika in his career so far.

Hi Julian, Thank you for taking the time to chat with us! How has 2018 treated you?

Thank you guys for having me – It was definitely a very productive year with 4 own EP releases and lots of remixes and there were also some great tour moments with some nice shows. At the end of December there will be a personal highlight with a remix for Sébastien Léger on Einmusika, can’t wait to show you the track!

Any highlight moments from this year?

One highlight was definitely the construction of my new studio. I am super happy with the studio and that has definitely influenced my work so far very positively.

The next big thing was that Warner Music Europe was interested in working together on my project. In September I started with the first release “Extase & Manie” on my imprint “Wassermann”.

Another great thing was to see Joris Voorn playing my track “Manie” at the top event Connect by Awakenings & Time Warp.
And another special moment was also when “Surreal” reached 1 million streams on Spotify and someone like Deadmau5 puts the track in his playlist.

Congrats on the release of “Painfully” What was going through your mind in the studio when working on it?

My goal was to produce a more melodic track with progressive melodies and a contrasting harder baseline. When the instrumental version was finished we started looking for a singer that fits to the track and gives it another vibe.

How has the reception to it been when you played it out?

It’s always very exciting to test the new track in the club for the first time.

I was very lucky to do this in great clubs like Ritter Butze (Berlin), Harry Klein (Munich) and Weidendamm (Hannover). The reaction was always very positive. From then on I knew that the feeling of the song reached the audience.

Things have been going well for you in recent years, with growing support and increasing number of gigs in recent months and years. What do you think that is due to?

That’s probably because I kept working on myself and never gave up. I’ve been very productive in the studio and I always give everything in my performances, which is not that difficult because I really love what I do.

Are you working on any other studio projects for 2019 we should know about?

Absolutely :) I’m working on several new projects. I just did a remix for Florian Kruse, which will be released on Last Night On Earth in early 2019. At the same time I have 2-3 new ideas in the pipeline that will be the follow-up tracks to “Painfully”.

How about future gigs, are there any, in particular, you’re looking forward to?

Yes, I’m very much looking forward to 2019! But I can’t announce anything at the moment, sorry.

Where do you plan to spend NYE?

I’m not playing a gig this year, so I’m staying at home and we’re celebrating in a small circle.

If you could choose one thing to accomplish in the coming year, what would it be?

I hope that there will be some gigs in new countries. I want to play all over the world!