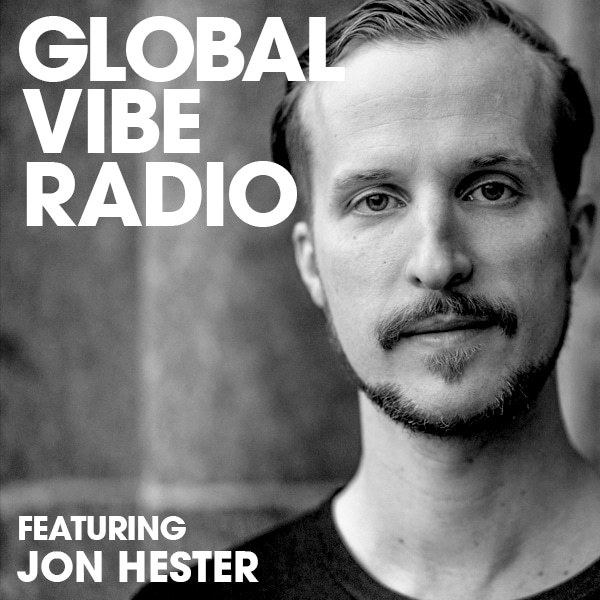 This week’s Global Vibe Radio mix is a 3 hour 20 minute set courtesy of Dystopian and Klockworks producer/DJ Jon Hester, recorded live at an intimate party at an undisclosed location.

Jon Hester got his start in the midwest US, living in Chicago, Minneapolis, and connecting with Detroit. After years on the dance floor he took to the decks, going on to work in a record shop, host his own events, and hold residencies that developed his sound. Music production and a move to Berlin followed, but dancing and mixing are still the inspirations that drive him to create. His DJ sets are built on physical rhythms and adventurous programming, effortlessly combining diverse varieties of techno and house. With an engaging presence and a knack for telling a story, he builds a unique connection with each audience and works any room until it sweats.

Jon’s latest release is the four-track Aether EP which was released on LET Recordings this past December and is available on the label’s Bandcamp page.

Hi Jon, Thank you so much for this wonderful set recording. Where is it from?

It’s from an intimate party in an undisclosed location.

Can you describe to us the atmosphere and mood of that gig?

A bunch of enthusiastic musical minds on the decks with total freedom to play whatever we wanted, surrounded by an open-minded audience that was up for a journey. A perfect formula for a fun night! I was closing it out, so the set started with a burst of energy and charted a more heady course near the end.

Any highlight tracks from this set we should keep an ear open for?

I played tracks from my forthcoming EP on Deeply Rooted in the beginning, as well as a forthcoming remix I did for Wice. There are a few classic Mr. G tracks in there, he’s always hitting with a powerful groove. You can also hear music from Jeff Mills, Private Press, Joey Beltram, Dustin Zahn, Damon Wild, Claude Young, Steve Stoll, Truncate, Tadeo, DBX, Aril Brikha, Delano Smith, Steve Rachmad, Exos, User, TWR72, Shlømo, and DJ Qu, among others.

You were recently in the States for a couple of gigs. How did they go?

It’s a pleasure to play for American audiences. What I love the most is that there is still a culture of dancing at parties in the states. I grew up in Chicago, so playing there was special for me. I closed the night with the New York classic that is “Hot Music”, and came down from the DJ booth to dance with the crowd. Some people were surprised to see a DJ dancing with them, but for me, it is a big part of who I am and the experience I want to create as an artist: a ritual for open minds, moving bodies, and connecting through dance. Society and technology have done a pretty good job of disconnecting people from the world around them — people experience life through screens in their hands, not with the people in the room. We need to fight against isolation by participating in the party experience, not just consuming it. The apocalypse might be closer than we think — let’s enjoy life while we can!

Not many people know, but you actually cut your teeth in techno in the Midwest early on, before moving to Europe. Can you tell us a little about that time and what you were involved?

The midwest techno scene made me who I am today. It was a combination of huge walls of sound in industrial spaces, carrying speakers, learning from those who were there before me, putting together my own club events, DJing, and all the while still dancing until the sun came up. I started listening to house music on the radio in Chicago during the mid-’90s. A 1996-1997 trip to London with my school band to perform in the New Year’s Day parade lead me to discover more music there and meet someone from Detroit who introduced me to techno. I moved to Minneapolis when I was 18, and dancing there lead me to DJing. After connecting with local collectives and working for a club, I began putting together my own events combining different styles of techno and house. As a promoter, I built events as a journey from start to finish and approached all aspects of DJing with a similar philosophy. I began working for a local record store which stocked all kinds of dance music, which helped me stay closely connected to the newest releases.

What prompted your move?

In a word, music!

You’ve released on some of techno’s most recognized labels like Dystopian, Klockworks, Rekids and LET. Do you have a favorite personal release of yours?

Well, people say you are not supposed to have a favorite child…

Your recent release was on LET. Do you have any upcoming work coming out in 2019?

Next up on the release calendar this year is my States of Matter EP on DJ Deep’s Deeply Rooted label, including an epic remix from Roman Poncet, and my own remix of Wice’s dance floor burner “Just Kiddin”. I loved his original version and was honored to get the parts to create another interpretation of it.

Any plan to come back for any gigs in the States next year?

Of course! I try to go back to the US for gigs every year, we’ll see what next year brings. I would love to come out to the west coast to play there for the first time!

Do you ever come back for Movement weekend?

What would you say are some of your career objectives for the coming years?

To create an environment that’s about connecting on the dance floor as opposed to a bunch of zombies on GHB marching while staring at the DJ.

What would you say are the pros and cons of living in Berlin?

I love the access to music here – with so many artists who live here or come through to perform, the surrounding inspiration is like drinking from a fire hose. That also creates a positive challenge to dig deeper into yourself to connect with who you are, what you are about, and define the musical path you are on. The hardest things about living here are the short days and dark winters.

Do you see yourself ever moving?

I see myself staying here indefinitely. Time will tell, but for the time being, I have no plans to leave.

The U.S. is going through some interesting political and social times and I saw you urging people to votes in the midterms. What’s your take in the happenings of your home country?

What can I say? Donald Trump is the president of the United States. I still have moments when I can’t believe that this is the reality. We have a psychopath con-man in office, an unstable narcissist, an ignorant idiot, a pathological liar with no decorum who is completely disconnected from the concept of personal responsibility, let alone a responsibility to the country he is supposed to be running or the world around him. His only talents are demeaning people who aren’t white, male, rich, racist, sexist, homophobic, xenophobic, and ignorant like he is, from the comfort of a golden toilet on twitter. Instead of doing anything helpful, he spends his time spewing hatred while actively going after the people investigating his questionable victory that was achieved through questionable means. He has turned the institution of the presidency into a dumpster fire.

The only positive from all of this is that some ugly truths about American late-stage capitalism, racism, sexism, homophobia, xenophobia, income inequality, gerrymandering, dark money, campaign financing, climate change denial and other issues are that much more obvious, so hopefully we will have the chance to at least address these issues with a democratic majority in the House of Representatives.

We must not allow ourselves to normalize the actions of this administration, and instead stay engaged, vigilant, and hopeful. I am encouraged by the advances of an increasingly diverse group of intelligent young people, and particularly women, who are now stepping forward to a life in politics that will serve to help others, and create a better future for all of us together. So, I guess you could say that while my take on the happenings in my home country is not very positive at the moment, I do believe there is hope.