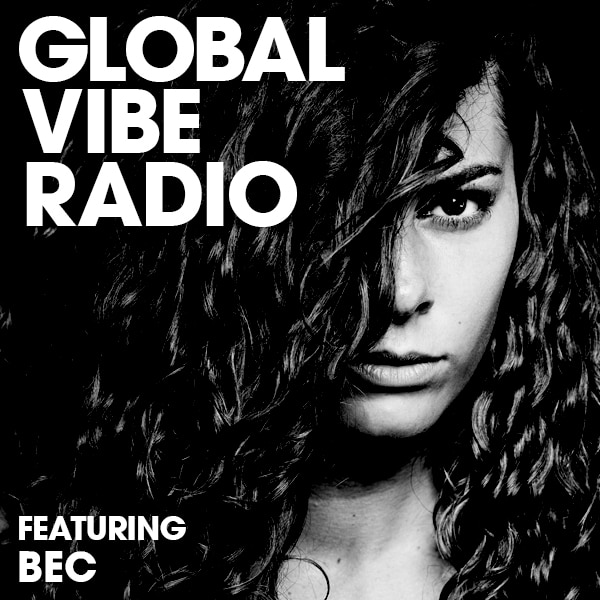 DJ and producer BEC, has had a string of successful releases signed under Pan-Pot’s Second State Audio and Carl Cox’s Intec Digital in the past years. She’s also been labeled as one of the most exciting newcomers by Pulse Radio and even got support from Charlotte De Witte who’s been performing back-to-back with her recently in Colombia.

More recently, she caught her ears with her latest EP Sines & Breaks on VOIGHT, now available on Beatport.

It seemed fitting then to not only feature this rising artist on our weekly Global Vibe Radio mix series but to sit down for a chat with her as things began heating up on her fall schedule.

It’s going well, thanks! It’s the week after Burning Man festival, so I’m decompressing and still getting back into the swing of things.

Any stand-out tracks we should keep an ear open for?

I’ve got a big release coming on Second State at the end of October. This one has been a long time coming, and the tracks have been played out by other artists for quite some time now, so I’m really looking forward to it finally coming out!

You’ve had an exciting series of gigs this year including Watergate, BAUM in Colombia, EGG in London and more. Any highlights for 2019 yet?

Yes! I have my first Australia tour planned for end of January, where I will play Rainbow Serpent festival which I’m super excited about.

You’ve also been productive in the studio. How many hours a week would you say you spend making music? How about listening to music for your sets?

Right now I’ve taken a break from the studio, but before, I was spending 8 hours a day, 5 days a week in the studio. I treat it like a proper 9-5 job. I’m a morning person and a dayworker which can be quite unusual for a music producer, but I really enjoy to have a more “normal” schedule during the week. I source and listen to music for my sets usually a week or two before the show date. I then put the music on my phone and listen to it wherever I go, as much as I can. So that I know the track inside out before I play it. Obviously, this isn’t always the case, but this what I try my best to do.

Let’s talk about your latest EP, “Sines & Breaks” on VOIGHT. What inspired the tracks on that?

It’s a fusion between the inspiration from my early DNB, Breaks clubbing days in the UK, and the techno that I’ve experienced in Berlin. Hence the name Sines & Breaks. Sine is referring to a sine wave, a basic form of sound that is very commonly used in techno music. And breaks, are referring to breakbeats, and particularly the non-four-to-the-four percussive patterns. I wanted to create a more experimental EP. So my aim was to take these two simple elements of sine waves and breakbeats, and see which different outcomes I could come up with.

Can you talk us through the production process, especially what software and hardware you used to produce the music on Sines & Breaks?

I used Ableton as my DAW. Most of it was actually created in the box. Except from the kick, and tom bass line which was created using my Analog Rytm which I love. The main sine synth notes are divided on to three separate tracks and created using Abletons Operator.

You’re also known for your releases on Second State. What’s your personal process when deciding which labels to submit your music too?

Second State is my home label, where I like to put out my main release once per year. They supported my hugely in the beginning and are a great crew so I’m really happy to be putting out music with them. As for other labels, I am looking for smaller, more independent labels for my secondary releases, where I can put out more experimental stuff.

How would you describe your current sound?

I’d say it’s energetic techno. I always have a solid beat but then try to combine melodic elements over to add character. Recently I’ve been experimenting by twisting in hints of other genres such as Drum and Bass like I spoke about earlier.

Would you say your sound has changed or shifted since you began making music? If so why and in which direction?

Yes, it’s definitely changed! I think all artists progress naturally. My sound used to be slower and more melodic when I first started.

You recently moved to Berlin right? How do you like it?

I moved three years ago now, so not so recent anymore. I love it, but there are things I really miss about England.

What’s been one of your favorite things about Berlin? How about least favorite?

Berlin is incredible for inspiration. I feel like it’s the techno hub of the world at the moment. So many artists are based there. There’s always someone you can meet up with to exchange ideas or have a jam in the studio. Least favorite has to be the winter, as I’m sure everyone would say! It’s tough. It’s cold, and so grey. Sometimes I don’t see the sun for weeks. But somehow this is also inspiring, I wrote most of my music that is being released in 2018 during January.

Was it only a career move or also personal?

Both. Pan-Pot approached me with the opportunity to be one of the first Second State artists, so I wanted to be closer to the label. But also I was very sick and tired of London. Although I love the city, it can be so difficult to live in. So expensive, and so busy, it’s hard to do what you really love. I feel people there are often consumed by living to work and not working to live.

Music, music, music. I’ve taken a short break from the studio but now I am focused on getting some new material finished and have some new labels in mind I’d love to approach!