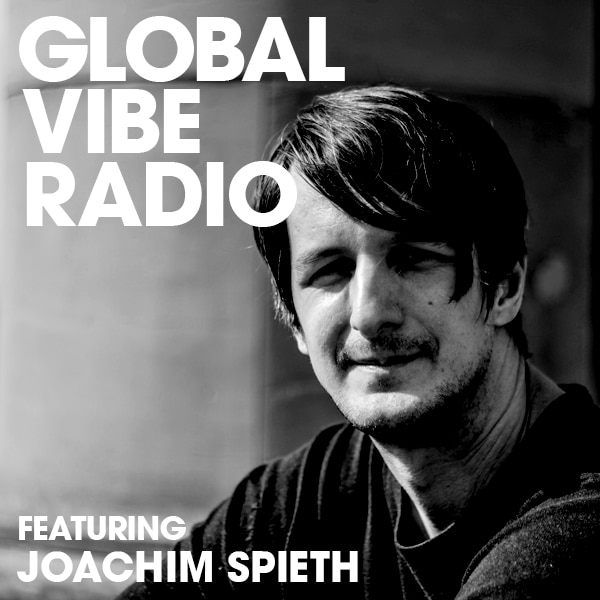 We are honored and proud to welcome Affin boss Joachim Spieth for his Global Vibe Radio debut.

It’s hard to summarize Joachim’s accomplishments in a few words. Calling him a talented producer is barely scratching the surface,  considering his large discography that began with early releases on Kompakt and continues on, over a decade later, with top-quality tracks featured on his very own Affin imprint.

His career has brought him to perform in a myriad of countries, including Australia, Denmark, France, Georgia, Iceland, Ireland, Mexico, Netherlands, Russia, South Africa, the UK and more — a testament to the respect his DJ sets have gained over the course of his long career.

But beyond his stellar work as an artist, it is his output as the head of his label that is even more recognized by peers and music aficionados alike. Joachim created his label Affin to be as independent as possible and focus on his own vision, surrounded by artists with a similar vision such as Keith Carnal, Svarog, Reggy Van Oers, Deepbass, Ness and Toki Fuko.

In honor of Joachim’s contribution to Global Vibe Radio we took the chance to talk with him in depth about his work as an artist, as the head of Affin and much more.

Hello mate, thank you for the mix! Can you tell us a little about where you put it together and what your thought-process with it was?

Hi! Thanks for having me. I always collect some tracks in advance, then I see if they’re matching. Some time later, I mix them and see after if it was translated the way I wanted. I feel if it has the flow I want.

I have been a fan of your interpretation of techno for a while, so let me say it’s an honor to have you as a guest on our show. “Techno” is a word thrown around a lot these days so let me ask you this: what IS techno to you?

For me it’s something that is on my side since more than 20 years. Like a good friend… a longtime relationship… a place to return in different moods…  a language that is understood… a language that I like to interact…

Your biography is eloquently written and gives a perfect insight into the sound you so capably produce and play but I’d love to know from you: how would you describe your sound to a new listener?

My music is a combination of spheric, layered soundscapes and techno. Besides from that I would recommend you listen to my recent album which explains much better than my own words can. For me the point of music is that you don’t have to explain in words, so a listener either feels it or not.

Were you aware of electronic music in general and specifically of techno growing up?

Do you remember the first time you heard techno? What was it and what was your reaction?

The first impression I had was that it sounded cheap and unnatural. Later on I found interesting stuff and was astonished how much is possible with electronic music to express soundwise.

Who were some of the artists you were avidly listening to when you first fell in love with the genre?

And how about now, who are you following closely now for inspiration?

Over the years the “being fan” thing changed a bit. It is more a temporary following of most. “This EP is great, that track on the album I like, etc.”

Any up-and-coming artists you feel we should be on the look out for?

Svarog &  CHPTR, even they are not newcomers, but I am sure there are many others I am not thinking at the moment.

Your label is also a source of both wonder and inspiration to me, as a techno fan. Let’s rewind to the moment you decided to launch a label. Can you tell us what was going through your head, what prompted you to make the leap and why it’s called AFFIN?

I had the idea to start a label for years. Before Affin I was also a part of another label and had my first experiences on how things worked. I also received demos that the others didn’t like or they thought it would be difficult to release on vinyl (the artists weren’t known, etc.) so at one point I decided to start building my own home. The name Affin has several meaning that I liked… so everybody can pick one for themselves. I wanted to express that this is something around me, close to me…

How do you decided who and what to sign up to the label and can anyone submit demos?

Back in the days things were quite different as i gave the label time to develop in almost any direction. In the last years that changed, and I centered it on techno and ambient. I also stopped working with too many different artists. Now it’s mostly a friend of the label who will be able to release music there. Less is more.

Are there any particular artists you hope to be able to sign to AFFIN for their debut release in the label in the coming future?

No. I like to work with a few acts, and sometimes it can happen that I sign somebody new, but I’m not really looking for more artists. It’s more of a natural process for me nowadays. We’re building an identity and we’re not looking for the next hit.

I sense a tight connection between you, the music you producer and play, and your audience. I’d love to know more about these connection beginning with the music. How do you focus and prepare for a studio session versus when preparing to play music in front of a crowd? Any particular rituals or things you do to get in the right mindset?

Yoga all day ! No, in fact I don’t prepare too much. I developed ways to work on my music. With my gigs it’s a bit different, as I always think ahead about what I want to express, or let’s say the range of expression. I select a lot in advance to be sure to have the music that is moving me at this point. I sort my music like a record case. But things can change during the night, sure!

What is the best crowd you have played in front of?

Can’t name one event from so many. Most parties are epic and I enjouy having a very meaningful vibe in areas where aren’t too many events. People are hungry for the music there while in other regions you have music 24/7. But some really good were vurt. (Seoul), Vault (Cape Town), Mosaique (Saint Petersburg) on top of a lot of others.

Going back to your work as a label owner, there’s been a lot of recent debates on the role of vinyl in the techno industry. It feels like to be taken seriously techno labels MUST release on vinyl, something that isn’t as heavily stressed with labels that feature other genres. What’s your take on that?

I like vinyl. It’s something different to have a physical product in your hands rather than a file on your stick, whether you play with records in a club or not. It’s a different thinking of how to prepare and produce the record compared to digital releases. In the end I’m happy for everybody buying music in general, no matter if it’s vinyl or a download.

Enough music talk… I’d love to know a few things about Joachim the outside of techno. Do you listen to any non-electronic music and if so do you feel it influences your work as a producer/DJ?

Yes I do. Sometimes I refer back to music I listened when I was a kid, also hip-hop or some acts like Portishead and Massive Attack, which incorporate electronic music.

What is the last non-electronic music artist you saw live?

Can you describe the neighborhood you live in?

It’s silent. I have nature around me, it’s good for having a walk and getting your brain refreshed. Most covers of the label has been made during these walks.

What are some things you enjoy doing outside of the studio or a DJ booth?

Walking in nature, biking, meeting some friends for having nice time… so not a special crazy hobby!

What is your favorite meal?

What is your least favorite food?

Don’t know at the moment!

One final question. We would love to see you in the States at some point, perhaps next year. Do you feel this is something your American fans can expect?

Yes, I think you guys can expect something, it’s time!