Q&A and 6AM Guest Mix: Mesmé 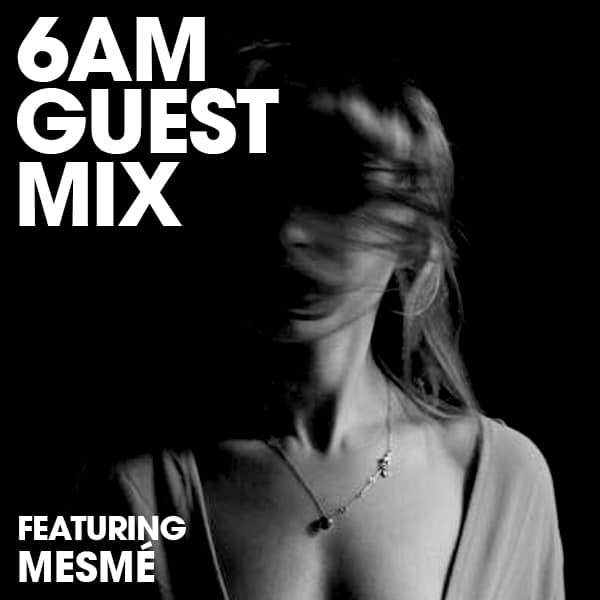 Q&A and 6AM Guest Mix: Mesmé

As the week comes to a close, we welcome one of Los Angeles’ brightest stars to 6AM’s Guest Mix series, our weekly Friday appointment where we feature a guest mix from rising or established talent around the world.

Enjoy the ride and read on for our exclusive interview and track listing:

Well, it certainly is great to sit down with you!

It’s great to be here. Thank you for inviting me.

(laughs) I never thought of it that way, but it has certainly been a bit of a whirlwind! I’ve been playing much more than I ever have before, and I’m really grateful for that. There were many highlights between last year and the first few months of 2018 so far. I think it’s safe to say I’ve really settled in to living in LA, and I’ve found my niche. I’ve grown a lot as an artist since moving here in January 2016.

What shows have you been a part of, and what were your highlights from the last year?

I’ve been very lucky to have had the opportunity to be a part of many exciting parties last year. One in particular was Miranda Calzada’s, Neptunian Influence brunch in Detroit during Movement Weekend (even though I was very sick the evening before and wasn’t sure how that set was going to go). Another highlight was playing the third and final installment of the LA[w]ax series during the summer with Raär (Vaerel Records) and Keumel (Inner Balance) who joined us all the way from Paris.

‘I also made debut appearances around Downtown LA; playing sets at Pattern Bar, Structure 3.5, and the Incognito X Dirty Epic party. Being able to share the turntables with artists like Marco Faraone, Wrong Assessment, Veils, and Motionen were big moments for me. I finished the year with comeback sets at Zafferano, Singapore, where I used to play before moving to the US and another in Tehran(Iran) for an ambient set at Paraffin Tehran’s show. Most importantly though – I launched my weekly party Misfit in November. Misfit is something I’ve really longed for, and to be able to host this night every week has been beyond words.

You mentioned Misfit, can you elaborate on it a bit more?

Misfit is my party that takes place every Wednesday night at Paper Tiger Bar in Korea Town. There is no cover for the party and it runs from 9pm to 2am. It began as an outlet for me to freely blend and express the kinds of sounds I love as a DJ. I would say that the night doesn’t revolve around a particular genre – It’s a montage of theme and setting, as the venue is pushed back in a dimly lit lounge. The theme is very Yin & Yang; It’s elegant but mischievous, modern yet nostalgic, but moody yet bold & daring. the combination of these elements has made Misfit a home for lovers of house, techno, electro, funk and jazz alike. Lots of people come to Misfit to network, because the party brings together people from a variety of different scenes that don’t usually cross paths with each other, and I really love that.

Now entering the 26th consecutive installment of Misfit, was there any one night that happens to stand out for you? Without giving too much away, do you have anyone coming up that you’re specifically excited about?

Well, I definitely have an answer for the second part of your question, but the first part is a tough one because everyone who’s played Misfit so far has brought a special vibe of their own! I wouldn’t want to make anyone sad by leaving them out of my list of favorites, although I will say I think my favorites might know who they are! (laughs). As for what’s next, I recently announced Nº29, which is happening on the 23rd of May, and will feature Darand Land from Scissor and Thread. I couldn’t be more excited to be catching Darand completely by good fortune while he’s visiting Los Angeles! It’s a huge honor to have him on a Misfit lineup. He’s one of my favorite artists, and I play his records at Misfit all the time. When Raär played LA[w]ax last year, he gifted me a Darand Land record as a birthday gift. He said, “I think you will like this”, and he was absolutely right. I was pretty excited to tell Raär that Darand is going to play my party now. His DJ sets are rare, so I encourage everyone to come check him out!

It’s amazing what you’ve been able to accomplish around Los Angeles having not grown up around the area. Where do you call home and how long have you been living in LA?

Thank you! I’ve been living in Los Angeles for two years and four months. Prior to moving here, I had never been to LA before. I’ve lived in other parts of the US; Missouri for a couple years and Boston for a few months in 2012 while I completed a summer program at Harvard. I’ve been here and there, but where I call home? I don’t even know. My family is from Iran but we moved to Singapore when I was five, so a lot of culture shifts happened for me. I’m your quintessential Third Culture Kid who frequently suffers from “where do I even belong” crises. I think I may have found a home in the United States though. I’ve enjoyed the freedom I’ve been given here to carve out a path of my own, and the American people have been very welcoming towards me.

That’s quite the journey! What was it like growing up in a culture that wasn’t necessarily exposed to this music? Did you have any musical influences and was there an active music scene in Singapore that helped pave the way for you to start digging crates in your spare time?

Since my family left Iran when I was five years old, I only have vague memories of being there. We would still visit my grandparents and extended family every few years, but I really had no exposure to the youth culture in Iran, let alone the music scene. Until last year when the underground house and techno community in Tehran found me on Soundcloud. I got the chance to meet them when I played an ambient set for Paraffin Tehran this past February and that was a cool experience. Since then, I’ve been getting more involved with the community back in Iran as well as the Iranian community here in LA. They are extremely talented and I’m proud to support them however I can.

As for growing up in Singapore, I would say clubs like Zouk and later on, Kyo, allowed me to get a taste for underground electronic music. I would catch sets by a string of international artists and it helped build my taste and my interest. The drinking age is 18 in Singapore, so we got to experience clubbing pretty early compared to American youth. My first time in a nightclub though, I think I was actually 15. My high school friends and I would sneak out and hit up some crazy venues in the main clubbing district. I won’t say who, where, what and how though, because I don’t want anyone to get into trouble! (laughs)

I’ve you noticed you reaching out to the L.A based Iranian-American House/Techno community on social media. What has that been like for you to reconnect with people from Iran here in Los Angeles?

I really like the idea of reaching out to a community, because I’ve never felt a sense of belonging in any one community, and I’ve always wished to have that feeling. It’s meant a lot to me to get in touch with people who have the same cultural roots as I do. I’ve come to find the Iranian community runs very deep, not only here in Los Angeles but in dance music community in general.

It’s great to see an artist who stays in touch with their cultural roots and tries to tie together different parts of the community. But let’s discuss your music… any new material heading our way?

It’s nice to have that sense of belonging with other people. You just might, I was going through old Ableton sessions from a few months ago and decided to revamp an older tune of mine that I originally wasn’t happy with. I wrote a new bass line and recorded a vocal part for it too. I ended up manipulating the vocal which left it sounding ambiguous, but still distinct enough to make out. I bring it in around the 35 minute mark if you’re listening to the mix I recorded for this interview.

What is your current studio setup and do you have any favorite pieces of gear you’d like to add to the studio?

I have most of the Korg Volca boxes except the Kick and the Sample. I also have a Vermona DRM-1 MK3 drum machine, Yamaha CS1-X keyboard synthesizer, Beatstep Pro, Dave Smith Mopho, some guitar pedals like the Strymon Blue Sky, and an Ableton Push. I use these pieces to make most of my music. I would love to add the Juno-106 to my studio and perhaps a Roland TB-303 for some acid, but honestly I’m pretty content with my current setup and should master what I’ve got for now.

Who are you listening to right now? What record are you spinning out the most?

I have favorite labels from the past, like Svek, Driftwood and Cabinet Recordings. Amongst the newer labels that I regularly pick up from are Rawax, Mistress, Lobster Theremin, Rough House Rosie, Salt Mines, and Yoyaku. They all bring unique sounds that I enjoy. A lot of my favorite records are coming off Yoyaku at the moment. I’ve also discovered some other labels recently like X-Kalay, which I’ve been really enjoying.

Based on your sets and recordings you like to create a deeper feeling within your record selection. Tell us, what draws you to these moody all vinyl sets you love to play so much, and what goes into picking out tracks to play out?

Making selections that are true to my personality and how I feel is something that is important to me. I never play anything that I think isn’t reflective of my taste as an artist. It’s interesting to me that my taste overall exudes a deeper vibe, but I like that. I like to play vinyl because it’s challenging and I want to be good at mixing at records. At the same time, spinning records is also a more intimate and personal way of DJing. It’s hard to describe, but it just feels more real. Playing vinyl forces you to be more engaged with the setup. You really have to pay attention and be on guard. Once you put the needle down, you become connected not just to the music itself but to the entire setup.

Wow, a heartfelt answer from someone who has a profound love for the music. Thank you for sitting down with me today Mesmé and we look forward to seeing much more of you in the near future!

Thank you for having me!

Misfit will be officially launching a podcast in June! It consists of live recordings and studio mixes from Misfit Artists. To keep up with all Misfit’s happenings and Mesmé’s tour schedule head to her Facebook Page Here!