Q&A and 6AM Guest Mix: Conduit (6AM Mix Contest Winner) 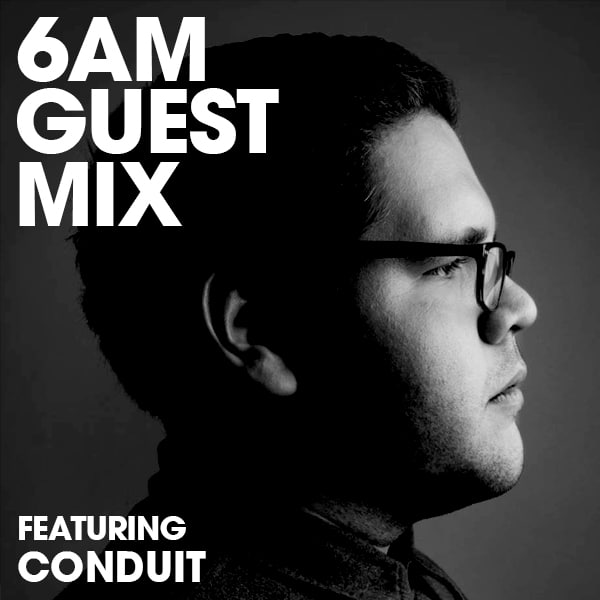 Q&A and 6AM Guest Mix: Conduit (6AM Mix Contest Winner)

We are extremely excited to showcase the talent of Conduit, aka James Ledesma, the Los Angeles artist who won 6AM’s first Mix Contest which saw nearly 60 DJs from around the world submit mixes for review.

As a veteran DJ of the Southern Californian rave scene, Conduit has been quietly honing his craft in the Los Angeles underground. He strives to weave a unique blend of beats and rhythms to create an atmosphere of conscious driven music, as this mix perfectly showcases.

We had a chat with James when he was informed of having won the contest. Ensure you check out the mix below and read on to learn more about Conduit and what he is all about!

Hi James, nice talking to you under these circumstances. Congratulations on the great mix you submitted for the 6AM contest, we loved it!

We would love to know a bit about yourself. Where were you born and where did you grow up?

Thanks for the kind words! I’m glad the mix resonated so well. I was born in Los Angeles in 1990 and grew up in the northeastern part of town.

What was your relationship with music as a child and as a teenager?

As a child, I grew up in a church which had an exceptionally talented choir and organist. Being exposed to such musicianship each week instilled a deep appreciation for music pretty early on. As a fairly introverted teenager, music was my escape. I couldn’t wait to listen to a Nirvana or Rage Against the Machine track during passing periods in high school.

At what age did you first encounter electronic music and how?

My first proper introduction was Pendulum’s album Hold Your Colour on a trip to Lake Tahoe when I was 16. After that, I was exposed to Hardstyle by a friend in my senior year of high school. Hardstyle has a very homogenized and EDM feel to it these days, but back then it was very innovative, very difficult to produce, and was the harder edge of dance music. I got hooked, caught the bug, and started digging.

Who were the first artists you listened to when you first began to get into electronic music?

I was a big fan of the producers from Scantraxx – the innovative Dutch label that helped turn Hardstyle on its head. I also enjoyed artists like Dark by Design, BK, Alex Kidd, and was always mesmerized by the supreme mixing skills of Carl Cox.

At some point, you decided to take a more serious interest in music and began DJing. When was that and what do you feel sparked this?

The first couple of years I went to raves, there was little to no modern Hardstyle being played. I knew the sound could resonate with Southern Californian ravers and I wanted to be the person to bring it to them. I began teaching myself on Vitrual DJ in late 2008, learned to beat match on a friend’s set up in 2009, and had my first gig in early 2010. Deejaying was something I was organically good at and I was willing to get better at. As someone who barely got thru high school and wasn’t enjoying college, I decided that this was the claim I was going to stake. I was fortunate enough to enjoy over six and a half years of consistent gigging with Hardstyle before stopping to recollect and reconnect with myself.

Do you also produce music?

Yes. I started taking it seriously in 2012 and went to audio engineering school in 2013. I was of course trying to produce Hardstyle (which you may have already guessed) with little to no success. For a while, I wouldn’t even open Ableton. It was a symbol of failure to me. After some time away, I began to craft the sound that this Conduit project is headed towards. I post tracks on my Soundcloud from time to time and I’ve gained confidence as I further down the path, but I still have refining to do. Like everyone else, I’ve got something cooking.

Beyond the great mixing technique in the mix you submitted, we noticed some fantastic track selection… and couldn’t even figure out what some of the tracks were! Can you talk to us a bit about how you selected the tracks for this mix and why?

In a genre like techno, I feel it’s safe to stay inside one particular BPM range or rhythmic pattern. I wanted this mix to feel like a night’s worth of sets condensed down into an hour. As for track selection, I’m always on the proverbial dig. I try to not follow one artist or label too closely and I do tend to keep good mental notes of tracks or artists with particular feels.

I assume the mix mirrors your current musical interests, especially as I have seen you attend techno shows that fit these sounds here in Los Angeles. At what point did you begin diving into the deeper end of the techno pool?

I began going to techno shows in early 2017. I started with LA Structures and Stealth parties and quickly found the 6am, Synthetik Minds, Dirty Epic, and Incognito tier of parties. I was absolutely blown away and humbled that this scene had existed the entire time I was focused on another genre. I was very hungry for an electronic music experience that was real and the vibes of these shows provided that ten fold. As for the music, my tastes have matured greatly in the past few years. I needed electronic music that challenged me again. The hypnotic and relentless pulsing sounds of techno helped me to get in touch with the initial spark that caused me to fall in love with music in the first place.

Who are your current favorite artists?

As I mentioned before, I have seen you at many great techno events in LA and noticed you’ve been supporting the local scene here in many ways. Where do you feel Los Angeles’ scene stands at the moment with regards to the music you love and enjoy?

Los Angeles has been the heart of dance music in America for the better part of the last decade and it shows. With companies like Mad Decent, OWSLA, and Insomniac making LA their home base, it makes for a very educated and eager party goer. I feel it’s important that in the middle of all this mainstream notoriety, the underground remains respected and represented for what it is: a safe haven for people who enjoy the darker side of electronic music.

Who are some of the local acts you enjoy listening to?

I’m a big fan of Drumcell and all of his aliases, Truncate, and Mesmé.

Let’s talk about Los Angeles but let’s leave music out of it for the next few questions. Which area of the city do you live in?

I live in Eagle Rock.

What’s your relationship like with the city? Do you love it or hate it, or are you indifferent?

I love Los Angeles. It’s such a dense patchwork of cultures with seemingly endless options to offer. I’d love to see more progression on solving the homelessness crisis, however.

How would you describe LA to someone who has never been?

Be prepared for traffic and good food.

Are you looking/considering ever moving away?

I’ve been thinking about moving to Detroit to continue my search for the real, but no one has been very enthusiastic when I’ve brought it up in conversation.

What are some of your favorite things to do in or around LA?

I absolutely love the Comedy Store. Kill Tony, Stand Up On The Spot, and Roast Battle are some of the best regularly running shows. I’m a huge comedy nerd, so the Comedy Store is like Mecca to me. I also love the local regular parties like Funky Sole, Respect, and the new Shabbaaaaa dancehall night.

How about food spots, any local gems you recommend?

I love the institutions like Philippe’s French Dip or La Luz del Dia in Olvera Street – which has the best tortillas, carnitas, and champurrado this side of the border. I would also go bankrupt eating at Flower Child in Santa Monica, Town Pizza in Highland Park, and Shakers in South Pasadena.

Okay… back to music for one last important question. What are your intentions and goals with regards to music and DJing/producing

Right now, I’d like to start gigging again to resharpen my DJ skills and instincts. I feel I have a lot of rust to knock off. I’ll also continue to hone my production skills and am striving to have a respectable release under my belt before I’m thirty. I have about 14 months to do so – I should get to work.

Work is a mantra we are fully committed to ourselves! Thanks again for the chat and for the mix, see you soon!