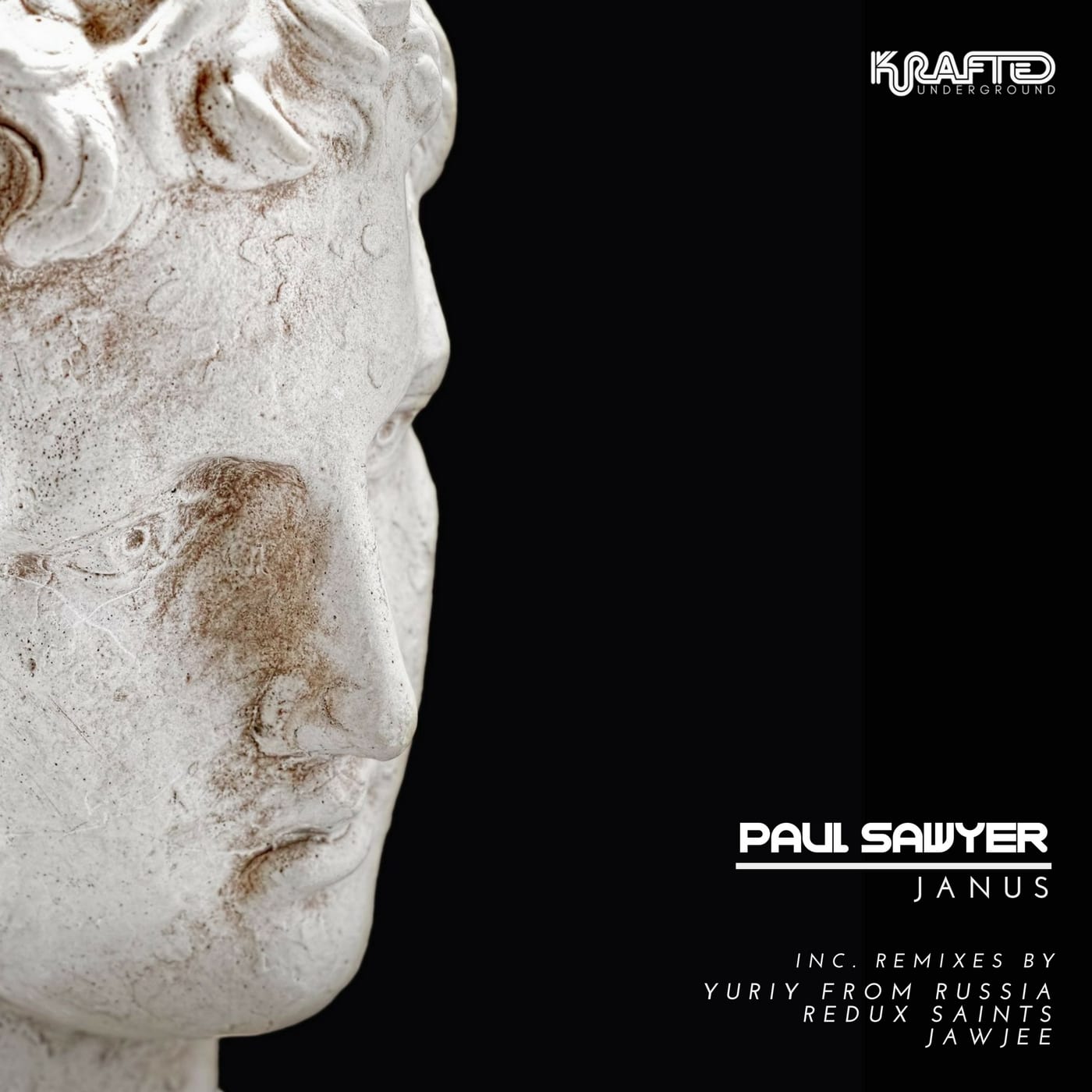 Paul Sawyer, a UK based DJ/Producer seems to be everywhere these days. With helping manage Krafted, a music label with multiple sub-labels, monthly Podcasts for (Frisky Radio, Data Transmission, and Proton Radio), and over 10 releases this year to date. One has to wonder where Paul finds the time or even sleeps.

Yesterday 6AM premiered the three remixes from his latest Janus EP, scheduled for release on July 23rd. The package included individual reworks by Yuriy From Russia, Jawjee and Redux Saints.

We had a chance to catch up with Paul and the producers who were chosen to remix his originals to discuss their approach and involvement in the EP.

How do you manage to be able to do so much within a 24-hour day?

(laughs) I often get asked that question and I suppose I’m a workaholic! I work at my day job and dedicating most of my spare time to music. That includes everything from making music to sending out press releases to connecting with artists for Frisky.

As much as I’d like to concentrate on just my releases and our labels, I love the challenge of compiling articles for the magazines I write for and connecting with people.

Paul, your last release Zeus has done really well. Can you tell us who was involved and the success it is having?

Zeus gained a lot of support from DJs including Kolsch, Dubfire, Betoko, Dale Middleton, Aly & Fila, plus so many more. I was really lucky to be honest, DMC World Magazine jumped on it really early in the year, so it ended up in the Buzz chart three times leading up to its release.

Having Tripswitch, Mark Youssef and Novikoff involved on remix duties has helped too. It’s always good to see the support the remixers get from your release. So much so that we ended up being interviewed by a number of magazines, so it was really nice to get those guys involved with the interviews too, and not just about me.

Your recently took a position with Frisky Radio. Can you talk a bit about what Frisky is, your responsibilities, and vibe?

That’s right, I took the A&R position on a part time basis after cementing a great relationship with the team at Frisky. I was hosting a monthly show on the platform and got invited to work with them after playing at the Frisky ADE event in 2017.

My role is seeking out new shows, liaising with current show hosts and bringing on board DJ’s for the Artist of The Week feature. I also work alongside Lauren who looks after the News/Editorial part of Frisky, recommending people for interviews and she does such a brilliant job with that.

I’ve also been working with Rob organizing this year’s event at ADE, booking the line-up and I am also sorting out Frisky events Worldwide which kicks off in Budapest in November.

Your current release is called Janus. Can you tell us your creative process for this track?

Janus funny enough was one of the first tracks I made in this style. It took me ages to nail the sound I wanted. I was going for the more melodic techno sound with big drawn out synths. I had planned to release this one first, but I had a rethink and moved my schedule around, plus I wanted some remixes to go with this release and didn’t want to rush it through. It was definitely worth the wait, as the remixes that go with this are so good!

You have multiple remixes on the track. Tell us why you choose these producers to remix your original.

I really wanted a mix of artist involved from different parts of the world. I’ve been a fan of Yuriy from Russia for a long time after hearing his show on Frisky and playing his music in various sets. So, when he agreed to work on the track, I was really pleased.

I wanted Redux Saints involved as Jason is a partner in my label Krafted and he’s been dedicating so much time to his production skills. He’s really become a great producer during the time I’ve known him, so it was no brainer to be frank.

I also wanted a UK based producer involved with the project and it took me a while to really decide who to ask. I’d been sent a track by a producer called Jawjee on Pro B Tech Music and I was hammering it in my sets, so George (Jawjee) was a perfect choice. He’s completely dedicated to the prog scene herein the UK and has some really great events planned.

What producer is really inspiring you lately?

This is a difficult question as there are so many! Recently I have been hammering all of Kamillo Sanclemente’s tracks, Tripswitch, Dave Seaman, Nick Muir, Ewan Rill, Guy J and Nick Warren. There are probably a good 20 artists that I could list that every track is killer!

What are your plans for end of summer and intro Fall? Will you be attending and/or performing at ADE?

I’m currently working on articles for Ushuaia’s IUMAG during the summer for each issue right through to the closing parties and concentrating on promoting my releases, whilst working with Frisky of course. They have been my priorities until the Autumn.

I will be at ADE, mainly ensuring the Frisky event runs smoothly and pushing my label. It’s always been the best place to connect with industry bods. A lot has come out of the last few ADE events. At the moment I’m unsure if I will be playing, so we shall see.

To date what your most proud accomplishment in the music industry?

Oh gosh, there’s so many to be honest. I get a big kick from knowing my music is being used, so hearing people like Solarstone opening his show with my track Genesis two weeks in a row was a highlight; signing tracks to great labels such as Robbie Rivera’s Juicy Trax & Sixty8beats, Toolroom, Soul Button’s Steyoyoke, getting signed to Balkan Connection and Pro B Tech Music are all recent achievements that I am proud of.

I consider myself very lucky as I’ve managed to connect with a huge number of people within the industry over the years and I value that so much. So, for me, my proudest accomplishment would simply be the fact that I’ve worked hard enough to be able to sit back and know that I’ve made those connections work in some way.

What’s next after Janus?

The next release on Krafted Underground in this series is Hermes, which includes a remix by Black 8. I’ve also got tracks coming out on Sunrise Digital, another on Pure Progressive, one on Awen Records and a remix on Pro B Tech Music very soon. Also, a track on ICONYC later in the year too.

When you received the remix request, what was it about the project that made you want to get involved?

I really impressed by the bass line and some old school stuff sequence. It reminded me about good old days of progressive house. And I’m immediately realized, I can definitely make something fresh but still keep the old school feeling. And of course, I was very pleased to get this remix request from Paul Sawyer himself :) There are tons of cool stuff on Krafted Underground.

Your remix has gained a lot of support from DJs including Darin Epsilon and BOg, were you pleased with the results of the promo?

I was very pleased to see such feedback. When you are experimenting, you never know what reactions you will get. And it’s always great when the label is spending a lot of efforts on promo campaign.

When you received the remix request, what was it about the project that made you want to get involved?

I got approached by Krafted to do the remix and it was one of the labels I had in my sights. So I said I would definitely have a listen. As soon as I heard the original I picked up on one element and instantly had an idea to add a stabbing groove to the melodic sequence which would evolve. I normally know on the first listen if a picture forms and is something I can work with and once I received the parts to work with it all clicked very quickly.

Do you find working on remixes easier or more complicated than original tracks?

I generally find working on remixes very difficult from past experience. I have had opportunities and tried and failed doing remixes before for Bonzai, ICONYC and a couple of others. I guess I jumped at the opportunities a bit too hastily whereas I know much quicker now if an original is something I can rework in my style.

Original work comes a bit more natural to me as there are no parameters, as the way I produce I have an idea in mind and then evolve it. In fact a few of my released originals have started off as remixes and as they have evolved during the productions process, there are was no place for the original parts so once they have been removed from the arrangement they become original tracks.

So taking on remixes which have been hard work has been a worthwhile experience even on the ones that didn’t work out.

How did you approach this remix after hearing the Original?

There were certain sounds that jumped out of the track that I wanted to include in my remix. Overall, the original was a great track, so I chose to keep the bassline and melody notes just using different sounds.

Do you find remixing easier than producing original tracks?

In my short career as a producer I’ve produced as many remixes as originals, so I find both exciting and challenging at the same time. Paul has turned to me for remixes a few times in past year and provided great opportunities to get some music out.