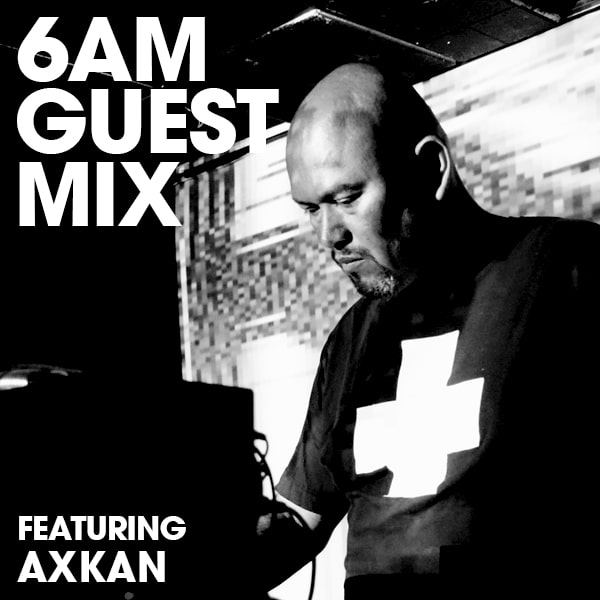 AXKAN showcases his techno prowess with a live recording of his Hybrid Live/DJ Set at EVOLVE 2018 : MORD Showcase held at The Works in Detroit during Movement weekend.

AXKAN is a talented producer based out of Los Angeles whose techno is highly influenced by Industrial and EBM sounds, alongside ethnic rhythms. His darker and noisy style of Techno is a highly sought out sound and can be found on several labels including his own OMEN Recordings, as well as Advanced (Black), The Cast Project, Reloading Records, SecreTechno, Rheostatus, From 0-1, GBB, Aerotek, EDR, Format Recordings, Switch Off, and more.

He will be performing a 2-hour Hybrid Live/DJ Set in a Los Angeles warehouse on July 21st in direct support of SNTS. All info for that event can be found HERE.

Hi Federico, thank you for the wonderful recording. Can you tell us a little about that gig, where it was, what was going on that night and what it meant to you as an artist?

Ciao Marco, the recording is from a very important gig for me, the EVOLVE 2018 : MORD Showcase held in May 26th, 2018. I knew we would have a packed floor and I knew I would be playing on a killer sound system, and I also knew that it had to be a perfect set since I was opening for several huge techno stars at the birth city of techno, in Detroit. So, to be honest, it was a little challenging since I had to work the promotion aspect of the event, but when the time of my performance came I had to leave all that behind and focus on my set. In the end, I think it went well, but I let you all listen and decide for yourselves.

This was a night you collaborated on as the head of OMEN Recordings. How did this happen?

That is right, it was a collaboration between three American labels: Sub-Divizion, Aerotek and OMEN. I feel extremely lucky to be a part of this team, especially after so many people expressed that it was their best after-party during Movement weekend this year. It all started 3 years ago when they booked me to headline the first Evolve party, then we became close friends and they trusted me to be a partner and to put together the main lineups for Evolve 2017 and 2018. It was a lot of work, but we are really happy with the results and we hope that next year the party will be even better!

When did you launch the label?

Our first vinyl didn’t come out until January 2017 but obviously it was months in the making and took a lot of planning, so we like to say that OMEN Recordings started in 2016

What’s your current goal with OMEN?

Well, for several years I had the intension of creating another label, after NopalBeat Records in the early 2000s and after supporting The Cast Project in 2015-2016, but I just didn’t have the time for it.

Now, before I discuss goals, you need to know that I grew up with industrial music and that it will always be my first love. When I heard the new tendencies of “Industrial Techno” in Europe, they totally caught my ears, and so after my partner Tanya Leigh moved to LA it felt like the right time to create OMEN and bring those sounds to the US.

That is our goal, we don’t want to be just another techno label, we want to stand out and release music from artists that inspire us. So far, I think people recognize our darker, harder more industrial style, and up to this day, I don’t know of any other American labels doing it exclusively, except maybe for Sonic Groove, although I believe Adam is currently running it from Berlin.

Would you say OMEN and the AXKAN projects are directly correlated, or do the two exist independent of one another?

The two projects are independent since they could live or die without each other. I’ve been doing AXKAN for over 25 years and OMEN is our new baby. Obviously AXKAN have several remixes released on OMEN so there is that correlation. It’s worth to mention that our first AXKAN EP is coming later in the year with an amazing list of supporting artists and remixers.

Let’s backtrack a little bit here. Where were you born and how was it growing up? Did you have contact to music as a kid?

I was born in Mexico City, grew up in Guadalajara and moved to the US in 1999. I landed first in Chicago for 11 years, and then I moved to LA in 2011. And yes, I was always around music, I was really young when I started dancing to my uncle’s vinyl records and I vaguely remember Donna Summer and Giorgio Moroder. My mom was also a music fan and there was always music playing at the house and we always had turntables and cassette decks handy.

When did you first discover electronic music?

In my early teen years, I was interested in dark/goth acoustic bands like Bauhaus, Joy Division, The Cure, The Smiths, Love & Rockets, Siouxsie, etc. but when I first listened to Skinny Puppy in high school, my world changed, I will never forget the chills. After that, I started following all kinds of electronic music, but mostly Industrial/EBM, which helped me associate with others with the same taste, like Luis Flores. Together with him and other friends, we ran an Industrial music radio show for some time and later we started buying instruments and writing music, the rest is history.

What got you REALLY hooked though?

I guess what got me hooked was the sound of it, it was just so different from what I was used to. Those analog sounds, noises and samples really changed me. I had to find out where they came from and how they were made. This interest soon got me into gathering instruments and building music of my own.

Before you made music a career, what did you think you’d be doing as a grown-up?

I wanted to be an architect, since I’ve always been a creative person and good at drawing, but later on I switched to computers science. Since then, I’ve been splitting my time between writing music and performing (with computers) and computer programming.

Did your family support your music career when you first started riding that wave?

Very much so! My parents got me my first Roland Juno 106 and my first computer where Luis and I started to learn music production with software. At the time it was just a MIDI sequencer (Cadenza and Cakewalk). They also helped me get my first Midi-Disc recorder and my KORG Prophecy.

Your music is definitely techno, but with heavy influences of EBM, industrial and even tribal sounds. Where do you draw your inspiration as a producer?

I have to say my main inspiration came initially from Skinny Puppy, Front 242 and FLA. Then I went more EDM like Leather Strip, SA42, etc. which later brought me into Techno. I also have to mention that the reason I created AXKAN came from listening to the magnificent Mexican artist “Jorge Reyes”. 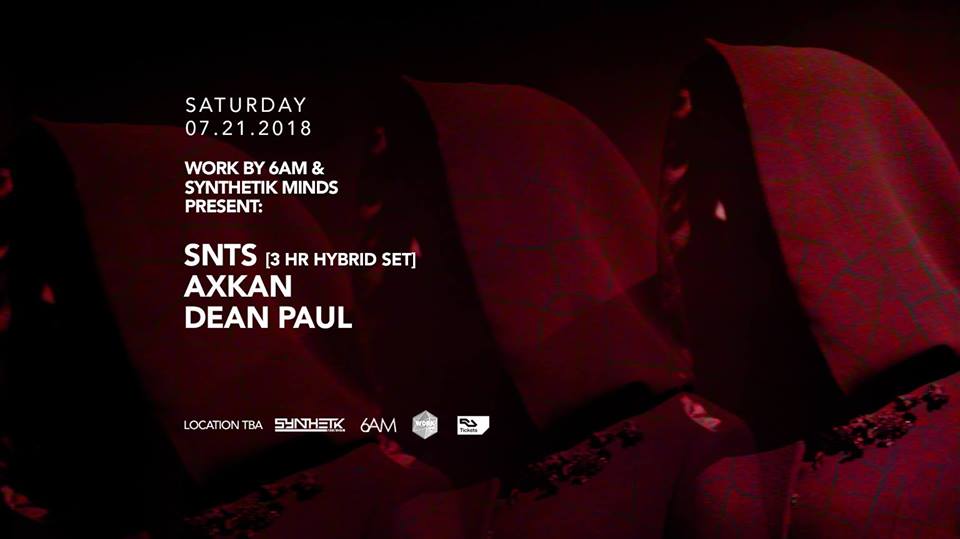 How about as a DJ? Are there acts and labels you particularly look to for inspiration?

Well first of all, I have been playing hybrid sets for less than a year. Before that, I was playing exclusively LIVE. I started playing other people’s tracks after OMEN, since I wanted to promote the label’s music. That’s when I noticed the positive effects of a hybrid setup on the dance-floor and for now I’m staying thisway. In terms of labels, I really like what MORD is releasing (the main reason we did the MORD Showcase this year), but I also enjoy Perc Trax, Aufnahme + Wiedergabe, Sonic Groove, Ostgut Ton, Raster, ARTS, HANDS, Jealous God, etc.

Regarding artists, I really like what I’ve heard from Belief Defect, Manni Dee, Lag, UVB, Ancient Methods, Ansome, and Oscar Mulero among others.

You’re based in Los Angeles. Why stay here? What does this city offer you as a producer, DJ and label owner?

I think the techno scene in Los Angeles is probably the best in the Americas. As an artist, LA offers so many events to showcase your work and so many options to obtain tools/gear, which is great for a synth collector like me. Also,  LAX being a huge hub, the prices for flights are great, which helps to facilitate bookings. I also love the weather, as unfortunately, living in freezing weather wasn’t very inspiring or productive to me. Plus, the food is great, and I feel super close to home.

What are some of your upcoming goals in this industry?

I don’t really have any particular upcoming goals, but I still have the same old ones: keep producing music that’s different from the rest and with a style, hoping I can jump on an important label. I also hope to continue bringing my noise to more places in the world and for OMEN our goal is to keep releasing quality music and hope to find hidden gems to publish and support. A good example is what’s coming on OMEN004, the EP is from a young and talented artist that I met on my last mini-tour in Russia.

Let’s talk LA: what are some of your favorite food spots here?

As everybody knows, I love Tacos. I enjoy Guisados as I think they have very authentic home cooking flavors, I like Leo’s Tacos, El Flaming Taco, Grand Central Tacos and from other types of food I like Thai Paradise, In-N-Out, Malbec, Honda Ya, and many more!

What else do you like to get up when not working in the studio or DJing?

I love going to the movies, hiking and swimming.

If you could share the stage with ONE act and one act only, who would you choose?

That would be original Skinny Puppy, although that’s impossible, since Dwayne Rudolph Goettel passed.

Thank you for everything, and to all those Techno-heads: I hope you like the recording and come to the show with SNTS, Dean Paul and myself next week!