In Interview with Darius Syrossian: Flashlight 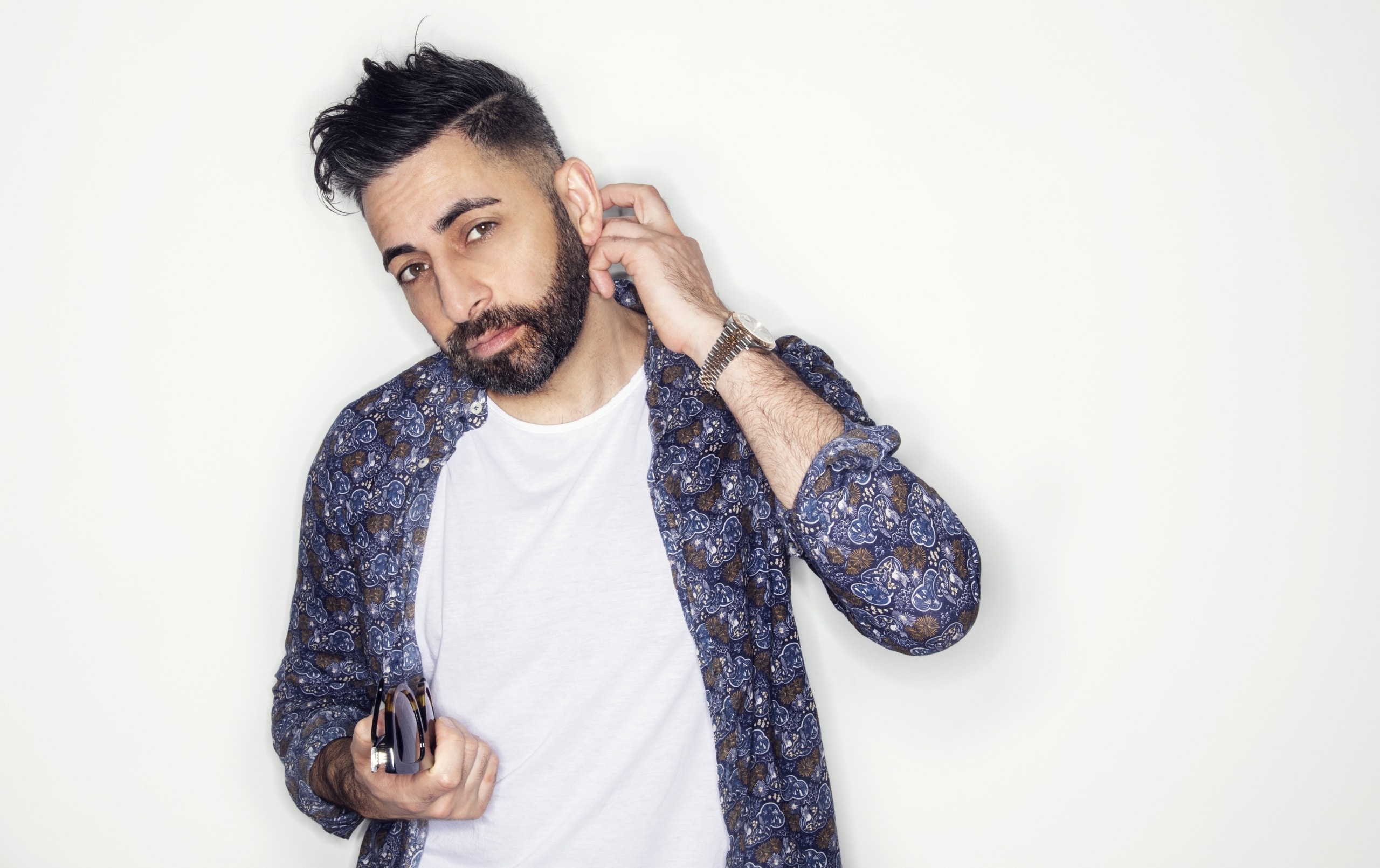 In Interview with Darius Syrossian: Flashlight

As he marks his fourth full release on Hot Creations with Flashlight, we interview leading UK talent Darius Syrossian about the release and its influences which date back to ’90s U.S. House sounds.

Selector, producer, label curator and radio host Darius Syrossian has dedicated his life to collecting and sharing the highest quality house and techno records. His productions have landed on respected labels including Get Physical, Drumcode, 8Bit, Moon Harbour, We Are The Brave and Defected, with whom his ethos is strongly aligned. Alongside his exploits in the studio and on the road, he has also launched his own record label – Moxy Muzik, which hit the ground running in 2019 with regular sold out Moxy Muzik events at 93 Feet East in London and South Nightclub in Manchester.

Delving into his extensive back catalogue of vinyl, Darius explains how his early admiration of Junior Vasquez inspired the release.

“I listened back to one of his sets that I used to have on cassette. He was a massive influence on my sound and a DJ I really appreciated, not just for the tough US house sound but he believed a DJ should play long extended sets. He never really sold out, turning down big money to tour, but stayed and played both Friday and Saturday night at the Sound Factory in New York. Flashlight is inspired by him… he used to shine flashlights on dancers on the dancefloor when he was spinning and Madonna used to come down and she would pick her dancers who toured with her from the club…. I watched a documentary about this the night before I made this track”.

Flashlight embodies the warehouse sound with tough snares, a raw bass and thunderous kicks. On the flip Boujee B’ takes inspiration from Darius’ love of the Strictly Rhythm house sound.

“I said this year I wanna go back to my roots and focus more on house, those US house ‘dubs’ that were played by people like Sneak, Van Helden, Gemini, R Sanchez, Derrick Carter etc… this is inspired by that vibe…”

It’s clear Darius’ productions have been influenced by a longing of the past, so we felt it was apt to catch up with him to see how he has been doing during these COVID-19 lockdown months.

Read our exclusive interview with Darius Syrossian below.

Hi Darius, nice chatting with you! It’s been a while since you were here in LA and a lot has happened since. How has 2020 been for you given all the unprecedented things we are experiencing and living through?

Hi guys, yeah I enjoyed my time back in LA when I was over, met some great people and looking forward to coming back. 2020 has been a strange year for obvious reasons but I have made sure I am putting the time in lockdown to good use and I’ve been very prolific in the studio. I’ve had releases on my on MOXY MUZIK label, as well as Phil Weeks’ Robsoul label, a remix on Defected, an ep on DFTD, also on Hot Creations and I have lots of forthcoming releases, on Steve Lawler’s VIVa MUSiC label, Ben Rau’s META label, on Moan Recordings from Italy, a remix for Ronnie Spiteri and I’ve also remixed Frankie Knuckles ‘Your Love’, which was an honour.

I’ve also done a few collabs with Bushwacka, and I’ve just finished a new collaboration with Jamie Jones which everyone will be hearing in the coming months, so yeah very busy in the studio.

How have you been doing in lockdown? Where did you spend that time and how was it there?

Studio, Studio, Studio & more studio, and lots of long walks in the countryside with my fiance to keep sane! (laughs)

Restrictions are easing off in some parts of the world. Do you feel that things will start to get back to a more “normal” way of life for the rest of 2020?

I hope they do but it isn’t looking likely is it? It’s such a bizarre situation but we are all in the same boat and we have to get through it.

When do you think your first gig will be?

I’ve done a couple of Social Distance gigs but to me these are not really proper gigs, house and techno is about feeling free and losing yourself to the music. It annoys me when people throw the term ‘new normal’ around, there is NOTHING normal about the situation we are in.

By the way, during lockdown many producers found extra time and motivation to be in the studio, while others didn’t feel motivated at all. How was it for you?

It made me extra motivated, I always try turning a negative into a positive, so I made sure I made lots of tracks and the feedback I’ve had on the released stuff has been amazing and also the unreleased stuff from the short preview clips I have posted on my socials. The feedback again has been very very positive so i’m excited for all the new material to come out.

Talking about studio, you have a new release out on Hot Creations. How did that come about?

I was watching a Junior Vasquez documentary on youtube, I respect the guy a lot. He was a massive influence on my sound when I got my decks in the 90’s and I admired his no bullshit approach, being a resident and staying in one club in NYC and playing super extended sets rather than trying to cash in touring the world playing short sets for big $. So I decided to make a couple of tracks which kind of reminded me of the music i would hear from his sets at the Sound Factory in New York from the early to mid 90’s. I actually sampled Junior’s voice from the documentary and put it on the track Flashlight.

If I may say, Hot Creations is a label not many would associate with your current sound. Yet, in your career, you’ve released on many labels with a fairly wide palette of sounds. How do you keep versatile when it comes to your production output?

I genuinely love a variety of genres and also like to mix it up when I’m DJing. I like to be a bit more balearic when DJing, and you can do this with extended sets so when I’m in the studio I like to make different flavours. I know people like to pigeon hole artists but I don’t want to be part of any fad, house and techno will always be relevant and all the sub genres stem from these two genres and fads come and go but house and techno will always remain relevant.

While on the subject of “sound” If you were to explain it to someone new to electronic music, how would you describe your sound?

Sometimes I want to make house, sometimes deeper stuff, sometimes more minimal and as you may have seen with the Drumcode release sometimes even Techno, but everything I make has the signature groove and a strong emphasis on the drum programming and is music aimed at the dancefloor, for example the disco flavoured stuff is pretty stomping disco techno crossover.

Ibiza closed for 2020, at least when it comes to parties. You’ve had quite the presence on the island in past years with Do Not Sleep. What does a year without Ibiza mean to you and to dance music?

Well before DO NOT SLEEP I had residencies with VIVa Warriors, and then Tribal Sessions. I fronted DONOTSLEEP for 5 years, but then I wanted to start my own MOXY MUZIK label, which in turn would enable me to guest for several other parties rather than just play for one. For example last summer I played for Jamie Jones Paradise party three times, also Defected three times, Solid Grooves a couple of times, VIVa Warriors a couple of times, and DNS. So it was nice to mix it up, regarding this year and Ibiza we are all in the same boat and we just have to sit this year out, I just hope everything is back to normal next summer.

What changes in the industry do you think will take place as a result of what we are going through with both lockdown and the social media?

I guess it will mean only the really dedicated to the MUSIC will properly survive, if you are mainly doing it for the money its going to hit you harder, as right now the money is non-existent, but if you are making music because that is your passion, it will shine through and people will pick up on that. I always have a rule I live by, never aim to please the masses, aim to please your real fans who like your music, because the majority of people who follow hyped artists just jump ship when the next fad comes along, and if you just concentrate on your own vibe you will gain more loyal fans. Leave the masses to follow the hype. regarding social media, I just do it all myself, keep it about music and can’t be bothered with trying to be some Instagram famous DJ, I’m old skool I can’t be bothered with all that crap (laughs)!

What do you look forward to the most once lockdowns are fully over?

Enjoying music the way it should be, with PEOPLE, enjoying life and letting this music that we all love make us feel free, so basically it’s about three words! Life, people & music…

Hope it’s sooner rather than later for all of us.