In Interview with Queens of The Night Charly Schaller & Dani DeLion 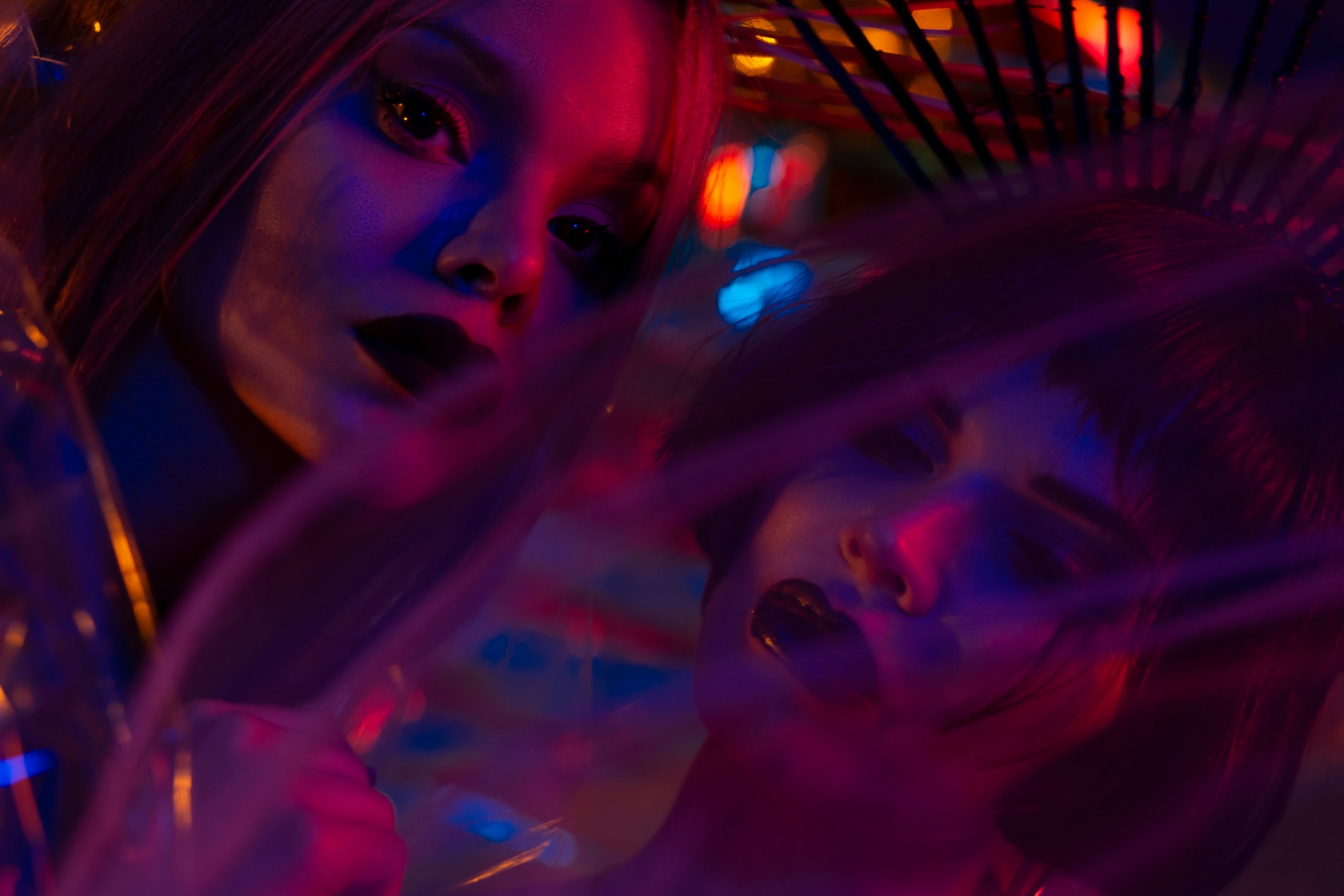 In Interview with Queens of The Night Charly Schaller & Dani DeLion

A propulsive, moody electro cut with a powerful spoken vocal/rap contribution from Dani DeLion, ‘Queen of The Night’ is an explosive sophomore release from the Munich born, Berlin-based DJ/Producer who cut her teeth as a resident DJ/promoter at two of Berlin’s finest parties, Edge Detection at PAL/About Blank and Level Delta at Griessmuehle. Landing alongside an even rowdier Empress mix, this release is a formidable slice of high tempo machine fun(k).

Having previously dropped a track for a V/A Alan Fitzpatrick’s ‘We Are The Brave’, ‘Queen of the Night’ is the first full single from Schaller, making this a monumental milestone for her career.

We caught up with both Schaller and DeLion to learn more about how they met each other, what it’s like working together and what is on the horizon for both artists.

How did you start working together?

Dani: A common friend from Munich told me a Berlin-based female DJ (Charly) was looking for a rapper/ singer for one of her upcoming techno productions and asked if she could introduce my work to her, next to other rappers. She send me a link to the track and I was amazed by the production work, though I’m barely into the techno genre in general. Still hoping charly would pick me!

A few days after the chat charly contacted me, telling me she would like to work with me on that track, talking about her vision and the production and that she would love to have female rap vocals added to the track, in English.

Everything happened during first lockdown, I had some free time and told her I would start working on lyrics and recording immediately, locking myself for two whole days inside the studio, sending her the final vocal stems a few days after, hoping it would please her.

Doing a lot of studio work for other artists I wasn’t expecting much from the collaboration at first, being even more surprised and happy how things turned out when charly told me she’ld love the vocals and is looking for a label for the track.

That’s how things started. It was my first time ever working with another female techno producer, as I’m producing my own music too, I felt it would be really special doing a feature that is completely female owned. That was my absolute vision of #femaleempowerment. Charly letting me know that she would like to have me as an official feature artists made me even more happy and thankful.

Do you feel a different influences from Munich and Berlin?

Dani: I wouldn’t say that I was too much influenced by any of the two cities. Charlys production is on an international level and top notch. Adding English vocals, rather than German was a vice decision in my opinion being able to reach out to a lot of people around the globe understanding the message of the lyrics.

The difference between charly and me, maybe also regarding the two different cities is that charly, in my opinion, is much more into nightlife and party and the whole techno scene, while I’m coming from a more jazzy/ R’n’B kind of genre, being a classical trained singer, never really getting in touch with the techno scene at all since then. Though Munich has some very good techno producers too.

Charly: I guess I can just say biographically that there are different influences from these cities. Berlin is where I started going out to Techno parties (Berghain when I was 18) and where I fell in love with Techno music. Going out in Berlin, spending long hours on the dancefloor and dancing to Techno is what got me into the genre in the first place and prompted my wish to become a DJ and ultimately producer myself. Obviously the kind of Techno music that is being played here is slightly different from what is being played elsewhere (e.g. UK) and that shaped my taste and probably also what I end up producing. Apart from that, nowadays I listen to a lot of international artists and my inspirations come from all different kind of things, not only Techno, but also Pop, Rap and so on.

How was writing a record during lockdown?

Dani: It was a blessing to me, lockdown knocked me out a little, no new projects, no possibilities, feeling kind of stuck in the situation. Working on the lyrics and the recording of charlys production brought me back to focus, I knew she was expecting something cool, something I never did before, that was challenging. The track brought me back to that fierce feeling when feeling yourself on another level.

Charly: During the lockdown I was trying to stay positive and a good way to do that was to use the free time at home to be creative and spend a lot of time making music. I guess writing the record and thereby having a super nice project, helped me to stay focused, avoid depression. On the one hand, however, I did feel that I lacked the inspiration that I usually get from listening to Techno on big soundsystems in clubs. On the other hand, maybe this is what made me write a track that is not so much a standard Techno track because I didn’t sit down with the intention to make a functional 4 to the floor Techno beat.

What would you say was your inspiration for the release?

Charly: I saw one liveshow by FJAAK in Berghain where they had someone rapping live to the Techno beat and I guess it was the best live set I ever saw. After the show, I thought that combining rap vocals with Techno was such a great idea and that there should be more such music.

I wasn’t actually listening to that much Rap music at the time. There’s always been some artists that I really like but I wasn’t really into the genre that much. I generally love vocals on Techno tracks, that really is my thing and having the idea of female empowerment in my head, I thought a female rap vocal on my track would be super interesting and also something new.

Dani: I was amazed by the track. For the lyrics I got even more inspired regarding the fact that charly and I are both independent female artists coming from different genres seeking their ways to the yet unknown music industry. I was amazed by charlys production skills, owning every little detail from a massive kick to a fat Bassline. She also gave me the freedom of doing whatever I like, I felt really independent and strong in my artistry. I imagined us performing the track together in a night club owning the scene like true Queens. The more I listened to the track the more I got obsessed with the strong Bassline and started to write… queen of the Bassline…

What are your thoughts about crossing over into another genre?

Dani: Almost the same answer like in the second question. I’m a classical trained singer, dedicating myself as an producer/ singer/ rapper to R’n’B and Hip-Hop music.

Only getting in touch with techno through my boyfriends addiction to techno music.
The first steps were really challenging, my boyfriend (jazz drummer) helped me count the bars, analyzing the structure of the track for almost two days, before I could start writing on something.

The difference between the genres lies especially in the arrangement, I was seeking for the repetitive moment where I could place some sort of a chorus that would stuck in mind of people listening to the track for the first time.

I think that mixing dark and strong techno beats with rap vocals will be a big thing in the future as it works so well together, being both rhythm based.

Charly: Same as your fourth question really. Also, I didn’t know any artists doing music other than Techno/house and the like before, so I find it super interesting to connect with Amelie who is doing totally different music and hear about what her workflow/ scene and so on is like.

What would you say is the style of this record?

Dani: I think Charly could answer that question more properly.

With the vocals I def tried to add some Pop and even mainstream vibes to it, to reach a larger crowd, to help people identify with different genres, crossing borders.

Charly: I found it interesting to have a breakbeat and change to a four to the flour beat only later in the track for some part. I feel that the track is super groovy and bouncy. Also added some sounds that I feel I recognize from trap/hip hop music to really merge the two genres.

How do you feel about signing the release to He.She.They?

Dani: I can only say I have never imagined things getting this far. I was amazed by the track from the first listen, but was expecting nothing, since experience showed me being recognized in the industry can be very hard at times.
I sent the vocal stems to charly hoping from my heart that she would dig it as much as I do, that was all I ever dreamed of regarding the collaboration.

That it turned out to be bigger than anything I did before was mind blowing. And I’m forever thankful that charly is such a supportive and strong woman never hesitating about having me as an feature artist on the track. This again means female empowerment to me.

Plus I’m happy that the track found an open label as Maya Jane coles one. When writing the lyrics I pictured all of the true queens who feels that queen energy no matter the gender.

Charly: I was super excited when Connor told me that he directly got an answer from He.She.They and that they really liked the track. The label is super cool and I love what it represents and the music they release. I love that the track found its home at a label based in the UK as I still feel very connected with the country after having lived there for 3 years for my degree.

You have a super exciting music video out for this track! Can you tell us a little about it?

Dani: Being given the freedom to decide on our own visions regarding the video was a blessing.
Deciding to shoot the video in Berlin rather than in Munich, as it feels like the capital of techno and urban/ underground style itself.

I love the fact we do this together, preparing and investing in the track, realizing how much we both believe in the record and in each other.

Beyond happy to share the screen with beautiful charly!

Charly: What Amelie says. Also it is a crazy experience to do a music video. Until recently that ‘s something I thought I never would do in my life as I associate it with mainstream music that is being played on the radio. Super nice to make the experience, kind of a childhood dream coming true.

Have you received any feedback on the track?

Charly: I was surprised and super happy that so many people from all around the world directly asked for the track ID and gave super positive feedback when I played “Queen of The Night” as the intro track in my Hör set.

Charly Schaller feat Dani Delion ‘Queen of The Night’ is released on 23rd April via HE.SHE.THEY. Records with a remix from Radio Slave to follow.