In Interview with Bloody Mary: “I Got Tired Of Hearing That Girls Aren’t Able To Do This” 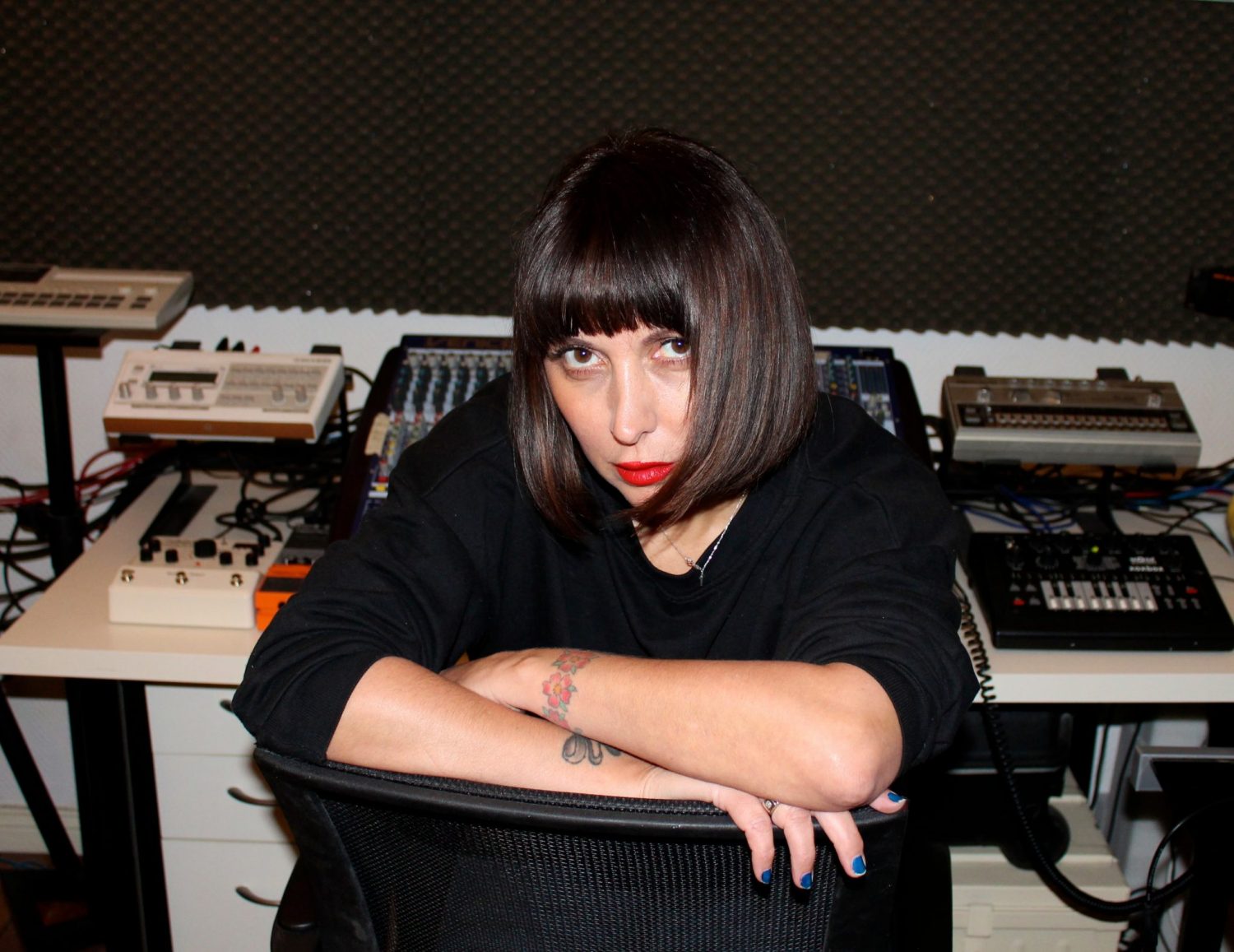 In Interview with Bloody Mary: “I Got Tired Of Hearing That Girls Aren’t Able To Do This”

Bloody Mary encompasses all aspects of an established electronic musician: she’s a vinyl DJ, she performs as a hardware-only live act, she’s a producer, and she’s been running the label Dame-Music since 2010.

The French-born, Berlin-based artist likes to be kept busy. When she’s not caught up running between airport gates, she’s usually locked away in her gear-heavy studio, continuously mastering her art as a producer.

After relocating to Berlin in 2005, it wasn’t long before Bloody Mary’s career as a DJ was put on the international stage. Nowadays, her name is easily recognizable in the worldwide electronic music scene, having rocked festivals and clubs as both a DJ and analog live act for over 10 years.

In 2010, Bloody Mary started her own vinyl and digital imprint: Dame-Music. To this day, the label has had over 37 releases featuring a variety of artists, and has hosted numerous label parties across Europe.

As a producer, Bloody Mary has released countless records on Dame-Music over the past 8 years. Since 2017, she decided to branch out further, releasing her music on Josh Wink’s Ovum Rec., DJ Pierre’s Afro Acid, and Tim Taylor’s legendary UK techno imprint, Missile.

With her U.S. Visa recently renewed, Bloody Mary readies to hop over the pond once more to join us in California for two special dates: the first at RS94109 in San Francisco on August 9th, followed by an underground headlining set for INCOGNITO and Lights Down Low in Los Angeles on August 10th. Tickets for both can be found HERE.

Hey Mary, thanks for chatting to us today! Whereabouts are you at the moment?

Hi! Thanks for having me. I just arrived home from the UK and Italy and will take the day off today to clean up my studio and to select some records before my gig in Berlin this weekend.

Sounds lovely. About Berlin… how did your move from France to Berlin change your career? Did you find yourself adapting your style with the move?

Before moving to Berlin, I was a resident at a club in Aix en Provence. I never really planned to have an international career. I was already thankful to play regularly throughout my residency. When I moved to Berlin, things happened naturally and really quickly, and to be honest I’m happy with the choices I made and with how my career has turned out so far. If I had to start again from the beginning, I’d follow the same path. Those years as a resident were really important to me, and helped give me the grounding and versatility to do what I do today.

We heard that you are launching a project later on in the year to aid emerging producers and combat ‘ghost producers’, along with speaking on a panel at ADE concerning the topic. Have you experienced ghost producing yourself? Why is this such an important topic to you?

I wouldn’t say I’m necessarily here to combat ghost production, every artist is free to go about their business as they like. I’m not here to judge anyone. I would however, prefer if there was a distinction made between artists who work hard in the studio on their own music, and others who don’t do this but still take the credit for it.

It’s 2019 and unfortunately, a lot of what is presented in the media about DJing and music production is fake. With money, you can buy a career with social media (buying followers, views on YouTube, etc..) and you can also pretend to make your own music while posting pictures in your ghost producer’s studio. The digital evolution hasn’t really helped – if vinyl were still the only medium for DJs to play in clubs, many of today’s so-called DJs probably wouldn’t be around.

As a female in this industry, I got tired of hearing that girls aren’t able to do this, so that was a driving force for me to prove people wrong when I started out. I put my head down and locked myself away in my studio for years, always learning as I went along. Nowadays I’m happy and proud to speak on panels and host workshops about music production. Music is for sharing.

Your label Dame-Music will be 10 years old next year and has many amazing releases from the likes of Josh Wink, KiNK, Thomas P. Heckmann and more! Have you got anything special lined up to mark the occasion?

It’s been a great ride so far, and we’ve got a few surprises up our sleeve for the 10 year anniversary next year. For now I’m focusing on the next Dame-Music release (number 40) which will be out after summer. It will be Vol. 3 in The Melting Point series, featuring 3 exclusive tracks from Thomas P. Heckmann, Splice (aka Skudge) and myself. 3 tracks made by and for acid lovers.

Can we also chat about your recent release on Dame-Music ‘Pleasure Unit’, a remastering of Tim Taylor & DJ Slip’s track which was originally released 21 years ago. How did this come about? And of course it featured remixes from yourself, what was your process when reworking it?

I met Tim Taylor 2 years ago while we were playing together in Croatia. We had such a great connection that he asked me if I wanted to do some music on his label Missile. I grew up listening to the whole Missile catalogue, and it had always been a dream for me to release there, so I immediately said yes! This is how my first release on Missile came about – the remix I did of C’hantal – The Realm in January this year.

From there, the idea of having Tim do something on Dame-Music came naturally. He had the idea to give a new life to the Pleasure Unit track he produced with DJ Slip back in 1997. We had the original mix re-mastered by Thomas P. Heckmann, Jerome Hill did an amazing rework and I contributed 2 different versions. I decided not to add any acid bassline to my remixes this time. I’m really happy with how the EP turned out and how it has been received by everyone so far. It’s always a pleasure to work with Tim and I’m looking forward to see what the future brings for us.

Another classic track you’re reworking is the iconic ‘Acid Track’ by Phuture, considered to be the first acid track ever made. What excites you about this project and how did you get involved?

I’ve been in contact with DJ Pierre already since last year as I produced a track for his Acid 88 compilation on Afro Acid which came out in April 2018. He told me about the Acid Track 35 remixes project and I fell in love with the idea. I love and play the original so much, so for my remix my idea was to keep it raw and to make a broken beat version.

Fun fact, I actually fully recreated the track using only my gear. The most enjoyable part was to recreate the acid bassline – I always like to record it in one shot, because you can feel the energy while turning the knobs. So I would say my track is not exactly a remix, but rather a tribute to Acid Tracks. I recorded and mixed the track all in the same day as I was so excited to work on this project.

We also heard that you have a new live show coming up. Can you tell us about what that involves?

I’ve had the urge to play live for the last 2 years, but I haven’t found the time to work on it properly as I’m always busy travelling or making music when I’m in the studio. Having such a long time to think about it has allowed me to consider which gear I want to bring with me on the road, and to work out what’s the most effective way for me to play live.

For example, it wasn’t easy for me to decide to add a laptop to my set up, as I’ve always used hardware only in the past. But after assessing all the options, I think for what I want to present, this is the best way to go. I’m ready for this new challenge and I’m looking forward to share the live on stage after summer.

Finally, what has Bloody Mary got planned in the upcoming months?

I’m excited to be back on tour in the USA in August and December and will have an Australian / Asian tour around the New Year. I’m working on a few new releases which will be announced soon, and as I mentioned I’m super excited to finally launch the live set really soon.