In Interview with Ali Stone 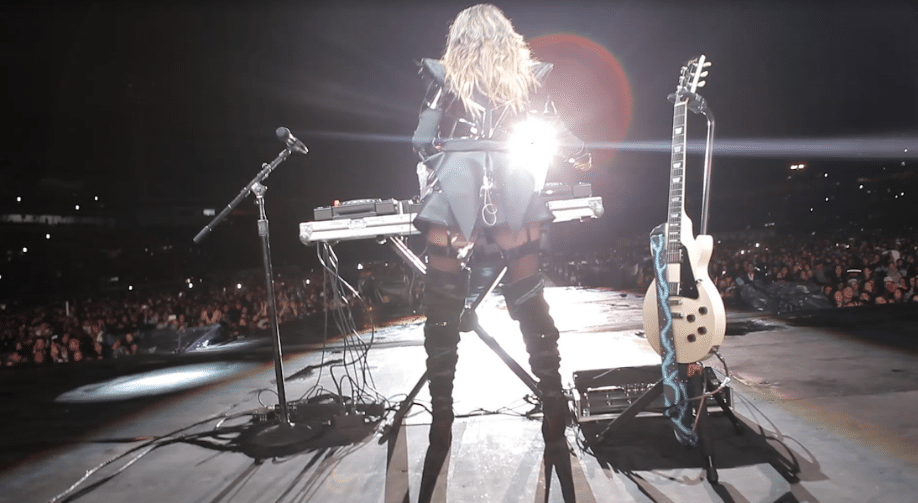 In Interview with Ali Stone

Colombian born, multi-faceted artist Ali Stone is no stranger to the Pop and dance music circuits, boasting a star-studded resume of collaborations and performances that are a testament to her undeniable prowess. Recently, the LA based producer dropped her steamy cut “Oculto” in preparation for her forthcoming En Mis Manos EP, out now on all streaming platforms.

Featuring as both producer and vocalist on “Oculto”, Ali Stone presents a well- rounded kick drum and hard-hitting techno synths that immediately transcend the listener to a dark and atmospheric dancefloor. Ali’s alluring vocals pacify the cut’s gritty edge, adding an essence of Colombian flavor before the tight drum patterns and stab synths are reintroduced to full effect. The risqué music video was made under the production of Craig Bosket, and in collaboration with designers to the stars Landeros New York, Monica Piñeros, and LaQuan Smith, best known for dressing the likes of Cardi B, Beyoncé and the Kardashians. Complementing the track perfectly, the visual offering elevates its audio counterpart to the next level.

Labelled as one of Billboard’s new artists to watch, Stone already has an impressive list of accolades to her name. The independent artist was chosen as one of Justin Bieber’s opening acts on his Purpose World Tour as well as joining the first female songwriting camp to write and produce for Mary J. Blige and The Sisterhood Band. Aside from her contributions to Pop music, the classically trained multi-instrumentalist has also managed to solidify a strong reputation within the dance music community, following collaborations with the likes of Alok, Alan Walker and Axwell & Ingrosso. Stone was also asked to create an exclusive artist sample pack for the popular music production platform Splice, allowing her to share and inspire young producers with her exclusive and original sounds. As the first single to drop from her forthcoming ‘En Mis Manos’ EP, ‘Oculto’ acts as a taste of things to come from the talented composer as she continues to explore a darker and more unique production style.

Hi Ali, great to meet you! Congratulations on the release of your new single ‘Oculto’, how has the feedback been on the track and music video?

Thank you! I’m happy to see the feedback has been very positive towards the song and its techno inclination, as well as to the video and its fashion-film like vibe. I decided to try different stuff with this release in all its aspects, sonically and visually, so seeing people appreciate that means a lot to me.

For ‘Oculto’ you’ve explored a much darker production style compared to your previous releases, what was the inspiration behind some of the Techno elements you’ve used here?

I decided to bring the techno elements from the underground music scene of the city where I’m from, Bogotá. I felt those minimal elements would work perfect with the darker ambience I wanted to convey, and they wouldn’t clash but complement the Colombian percussion and the vocals I added to the song.

Last year you were part of She Is The Music with Mary J Blige, how important do you think these songwriting camps are for independent artists?

I think these camps by She Is The Music are great, not only for artists, but for female songwriters, producers, engineers. She Is The Music has focused mainly on giving visibility and participation to women in music areas where statistically, there’s mostly men…for example, 98% of music producers in the industry are men. That’s why camps like these are crucial. I also think that, besides this, songwriting camps are a great opportunity to collaborate with other talents, to learn from others, be able to combine different musical elements and enrich your own music.

What would you say are some of the main obstacles that independent artists face?

Money, (laughs). Joking aside, I’d say one of the obstacles could be that, as an independent artist, you end up learning how to do everything yourself, because maybe you don’t have any budget or enough money to hire somebody to do that for you (talking from personal experience). But I see this actually becoming a strength in the long term. For example, this led me to learn how to mix and master my songs, how to design my artworks, edit my videos, animate visuals, because I couldn’t hiring somebody to do that for me…so I decided to learn and do it for myself for free.

What was your experience like of opening for Justin Bieber on his Purpose Tour?

It was an incredible experience! The energy of a crowd in a stadium is amazing, and the reaction of Justin’s fans to my music was so special, I was really grateful to see people screaming, jumping, and singing along with me. Justin and his crew were also super professional, kind and generous, so that really made everything even better!

Your ‘En Mis Manos’ EP comes out this month, how long has this EP been in the making and what was your production process here?

I began the songwriting process towards the end of last year, and this year I produced those songs, then chose the final tracks I wanted to keep into the “story” that my EP is about. I’ve always begun a track by producing the hook or chorus, and then when I feel I have a solid idea there, I begin branching out the rest of the production for the entirety of the track. There are two songs where the outro of one is the intro of the next one, so the production, in that case, went out basically in the same session, to make sure that continuity in sound made sense and sounded how I intended it to sound. I usually mix as I produce, but on this occasion, I decided to leave the final mixing stage separate from the production/creative process, so that I could process everything more efficiently and in a more organized way.

How do you think your Colombian roots affect your musical style?

I think being Colombian gives me an additional palette of sounds to add to my style, from percussive or melodic elements, to language variations. Also, Colombia is a very diverse country, so I feel that diversity of everything that my country is, translates into different sounds that define my identity as a Colombian woman within my own essence.

Can we expect to see you at any festivals this summer?

I’ll be playing in Latin America and the East Coast of the US for the summer, but I’ll be posting more dates and details on my social media @itsalistone and my website www.alistonemusic.com, so make sure to follow me there to be up to date with this!

Do you have any plans for any collaborations in the near future?

I actually have some songs I’ve co-written and produced for different artists that will come out this year. One of those actually just came out! It’s a song I made for Mexican artist Danna Paola, the track is called “Valientes”. I’m always posting about these releases and my sessions with other artists on my socials, so if you want more insight or sneak peeks into what’s coming in terms of collabs, definitely check out my stories on Instagram/FB!