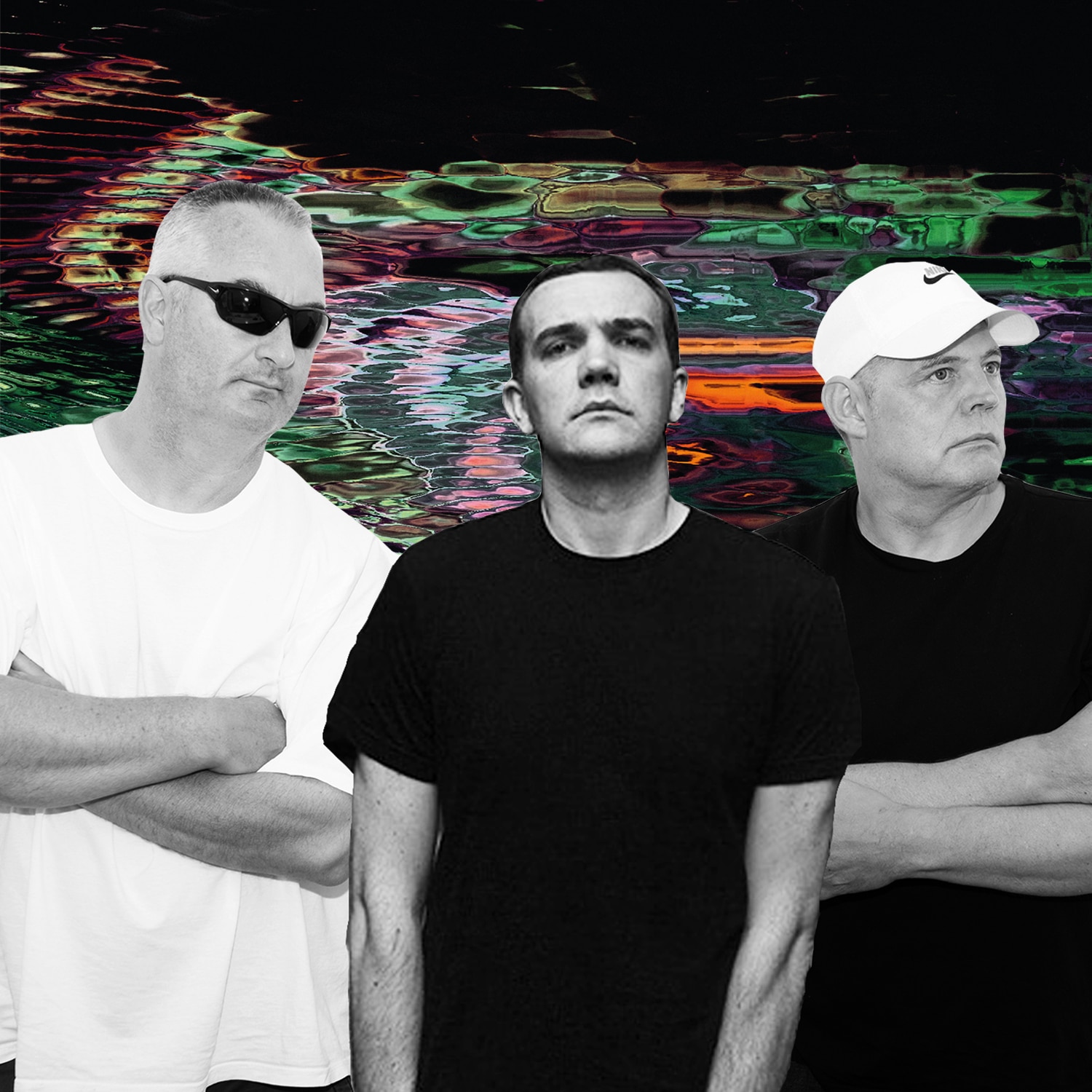 We haven’t seen Slam and Perc go back-to-back behind the decks (yet), but we have just had the pleasure of witnessing them interview one another, exclusively for us at 6AM.

The collaboration comes as a response to the lockdown months when we were all separated by necessity, and unable to join each other on the dance floor.

On March 2020 the world was abruptly thrown into collective disarray. The pandemic stopped almost everything dead in its tracks. No social gatherings, self-isolation, a sense of panic and bewilderment prevailed. An industry that had become so dependent on human connection and unity, was suddenly switched off and put on pause for an unforeseeable future.

It was in this climate that The Louder Than Chaos project was born, facilitated by Soma Records’ head honchos and Techno protagonists Slam. A collaborative project with friends, colleagues and contemporaries normally only seen at airports, or events, now brought together under a completely different set of circumstances, allowing for a purposeful connection in a time of disconnect. The focus of the project is built on a powerful mutual participation, remotely constructed over time and fully intended for holding court on peak time dance floors when they inevitably return. That time has now finally come.

With this latest EP now out, we decided to ask Slam and Perc to interview each other, their answers providing insight on how they dealt with the months of lockdown, and how that has shaped their return behind the decks.

How did you guys cope with the time off during the pandemic? I could see that Soma was keeping itself busy with releases, but did you miss all the traveling and tight schedules of gigging?

Production wise it was probably our most productive period. The time allowed us to focus and experiment with new plug-ins and new ways of working etc. We had 6 Soma E.Ps and also we were working on all the collaborations for the Louder Than Chaos project too. I guess with Soma it was a testing time with all the clubs being shut, but luckily sales were steady throughout.

Gigs wise to be honest we really enjoyed having some time off to reflect, but the break has made us appreciate just how much we’ve missed that connection you get with people when you’re playing. It’s an addiction and that buzz from a good show is like nothing else.

The time off allowed us to come back reinvigorated with a fresh new energy.

How do you work in the studio? Do you always work together? Or do you first come up with ideas separately?

We tend to bounce ideas back and forward then get together in the studio to finish the tracks there. But each track is different; there’s no real set of rules. It’s important for us to just jam the ideas but not get too hung up about finishing everything. I guess the only rule we have is to not labour on tracks for too long. We’ll run off several versions or loops, then re-visit them at a later date and finish the best ones.

Do you still use a lot of hardware in the studio these days? Or do you prefer the speed and flexibility of working in the box?

We’ve kept all our hardware and we jam with it a lot. Especially when we’re preparing for a live show. We both like the tactile nature of tweaking machines. In the past we definitely had some kind of machine addiction haha. We’ve been collecting them for sometime now, lots of Roland stuff mainly. but we’ve slowed down buying new stuff recently, especially as there are so many great new plugins available now. We take our Modular rack and a few other pieces with us for like shows.

What would you have said to someone who told you back in 1991 when your first release came out that you’d still be doing this in 2021?

I dunno, we’ve always just done what we wanted to do when we wanted to do it. We do it because we love it! When we chose this path back then it’s because it totally consumed us, and it’s the same now. We’re grateful everyday to be doing something we love so much!

How is the Scottish scene since events restarted? What was the atmosphere like at your first Glasgow gig since lockdown?

We played a lot in Scotland especially at the beginning when everything started to open up.
We had a great Pressure event with us playing all night which was special. Then an amazing Riverside Festival which was Scotland’s first actual festival back after the lockdown, and the vibe was wild at the festival and at the afterparties too.

What is your favourite piece of studio equipment that’s used to create an integral part of your sound?

The boring answer would be Ableton Live, because it’s still the centre of all I do and no track is started or finished without it. A more exciting answer would be my Culture Vultures or my Overstayer Modular Channel. I reach for these when I can’t find a way to get started on a track or remix or if I just need that little bit of analogue life brought to an element of a track. Between them they cover many flavours of saturation, compression, EQ-ing and filtering so there is a lot of scope with them to transform dull sounds into something exciting.

What music did you grow up listening to, and how has that shaped your sound and attitude today?

I started off listening to synth pop and then some hip hop such as Run DMC and Public Enemy and then I moved onto rock & metal. From there I starting hearing some of the rave music that was hitting the UK charts; The Prodigy, SL2, Altern-8 etc and that led me to the rave scene and then onto techno such as the early Tresor and Novamute releases. All of this has influenced how I make music and I’m always looking for a certain attitude and feeling rather than something easily slotting into a defined genre. It’s the same with Perc Trax, the speed or toughness of a track doesn’t really matter to me, I’m chasing a physical & emotional response that I want to feel when I hear the track.

What’s your thoughts on the actual importance of musical output in the Techno scene today? Do you feel that audiences pay as much attention to the creative art of production today as they did before?

Emphasis on musical creativity and things like sound design seem to come and go in techno. A few years ago with the rise of Berghain and labels like Ostgut Ton sound design and a focus on texture was a really big thing, now we’ve switched to a focus on power and momentum and possibly melody as well. Because of this some of those intricacies have been left behind for now. Tracks still have to be well engineered to sound good on a big system but maybe right now people have less interest in or don’t want to give attention to production subtleties and deeper sounds hidden in the mix down of a track.

Do you have any strange hobbies or guilty pleasures that people wouldn’t expect from you?

Hmmm not really. I work so hard whether in the studio or travelling that I don’t have a lot of time for much else. I never really see the need to describe something as a guilty pleasure. If I like it then I like it, what other people think of it doesn’t really matter to me!

Tell us about your very first experiences with Techno, and electronic music. What inspired you initially to want to produce and perform music for yourself?

Going back to Altern-8 I read an interview with them where they said all they used to make tracks was a sequencer and a sampler and even though just those two bits of gear were still out of my financial reach at the time I still found it inspiring. To start off I could only afford a drum machine (a Roland TR-626), a small Mackie mixer and some guitar pedals so that pushed me to make techno as I had no sampler to add breakbeats, sampled vocals and stabs to my music to make rave / hardcore. I remember buying the Tresor 3 compilation and it completely blowing my mind and changing my outlook in music. It featured Maurizio, Joey Beltram, DJ Hell, Daniel Bell, Jeff Mills, Robert Hood and many more and showed me a darker, subtler side of electronic music away from rave and the omnipresent big UK electronic acts like The Chemical Brothers. Sounds and rhythms had time to breathe and develop and not every track needed to have a massive breakdown or hook on it to stay interesting.

All Louder Than Chaos are available on the Soma Records Website