In Interview: Second State call on VNTM and Tahko with “Rave Culture” 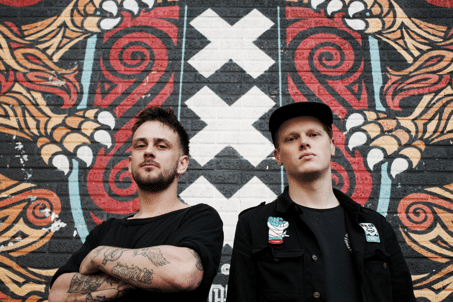 In Interview: Second State call on VNTM and Tahko with “Rave Culture”

Two worlds come together for the first time, an unexpected collaboration that seems to of paid dividends for the pair. Dutch techno artists VNTM Live and Tahko join forces for the next instalment, on Second State with their ‘Rave Culture’ track.

Now is a great time to catch these two very good friends launching this project trying something new.

The dynamic pair delivering high octane energy on the opening track of this VA have more than enough to shout about with upcoming high profile festivals gig for VNTM Live at Tomorrowland (Afterlife Stage), Straf_Werk Festival (Tale of us Stage), Summerlake Festival and more. Tahko will be taking the reins at Welcome to the Future and Thuishaven Techno Special. Both with ADE in the pipeline, and more releases on their way.

Industrialyzer’s ‘Pulse’ certainly picks up the pace again as Ilija Djokovic’s ‘Chimera’ and Frazier’s ‘Escapism’ blend the lines between post modern production techniques and classic rave sounds. Turning into the back half of the compilation we have the wicked vibes of Flug’s ‘Maschine’ and Fabio Florido’s ‘Upsurge’ pave the way for newcomers Emanate’s mesmerizing ‘Again & Again’.

Wrapping up the twelve tracker are ‘Wiggle’, a wild track of the winner of this year’s Beats in School competition by Beatport and Second State, and the label’s mainstay BEC’s instant hit ‘Three Words’, resulting in a finely curated package that will deliver in any moment.

We caught up with Tahko and VNTM to talk about their latest release, their relationship with Second State and the nature of this new collaboration they’ve launched together.

Hi guys, how have you been? You made the first track of the new Second State SUM compilation that comes out July 19. Can you tell us more about ‘Rave Culture’? How did your collab come about?

VNTM: Well we have been friends for almost six years now, we studied at the same music production school called Herman Brood Academy in The Netherlands. I think it was about 2,5 years ago when we first started working together on something and after many different tracks and ideas, this is the first one to be released.

Tahko: This was actually a project from me I had worked on earlier, Tom is the melody guy and I’m good with rhythms, so for us it’s really funny that the one track where we swapped places is now being released, the synths in this tracks were mine and Tom did the beat programming. We both are pretty proud of how hard the low-end bangs on sound systems. We normally start new projects from scratch, I’ll go and find weird percussion lines and make drum loops, Tom makes his long melody and pads. We were working in my studio and I said: “let’s check out some of my old projects to see if something pops out that you also like”. The ‘Rave Culture’ one made his eyebrow raise and he said ‘I think we can work with this’, threw away the drums and kept my synth lines and we started building it up again. Tom had a groove in mind and started building that, I looked for a new kick, we looked for a new sub bassline and voila ‘Rave Culture’ 2.0 saw the light of day.

Do you often work in the studio together?

Tahko: We work a lot in the studio together to just jam and see what comes out, I learn a lot from Tom because he’s technically really good. I think I can get Tom out of his comfort zone and put that weirdness into the productions. It’s a good combination and I don’t have a click in the studio with anyone else like I have with Tom.

VNTM: Aah, thanx man. Like I mentioned we did many tracks before but since our sound is actually quite different the tracks we make mostly end up as just ideas or something we both don’t really play in our sets. It was quite hard to find something that works well in melodic sets as in more heavy-hitting techno sets.

What kind of hard-software did you use?

VNTM: We both use Ableton10 and besides that, we used a Moog Minitaur and a lot of different plugins for this track. Tahko came up with the lead synth from an old project and I started playing the first version of ‘Rave Culture’ in my live sets a few months ago. That’s where I added the main percussion line as a live improvisation and it was recorded during Awakenings, it worked so well that I decided to recreate it in the studio and put it on top of the record to finish it.’

Tahko: Thank you Tom for making me switch from Logic a couple of years ago. Tom has some hardware synths in his studio that we used but we’re both pretty “in the box” guys so it works really well to work in the same DAW if you need to open each other’s project files.

How did you guys get the track to Second State, what’s the story?

VNTM: I met the guys during their all-nighter in Amsterdam about a year ago and then again at Awakenings festival and ultimately during ADE ’18 at their own label night. So after a few beers and nice chats I got the email from their A&R manager, took a few tries and this is the result.

Must be amazing for two young Dutchies to be able to release on Pan-Pot’s imprint. Are they an inspiration for techno producers like you two?

Tahko: I actually play a lot of their tracks in my sets, I really like the ‘Weltlinie’ track cause it’s so damn funky and stripped down. And from their last release I really like ‘Kanal 7’. I love the ‘less is more’ tracks and it fits perfectly in my sets. So yeah, you can say I get inspired by Pan-Pot in a way.

VNTM: From the first time I met Thomas and Tassilo, they have always been very nice and took time for a chat, although they have a huge touring schedule they still remain in touch with smaller artists and this is something that isn’t always the case with bigger DJs. Besides that, they have a very broad range in music. They play, deeper more melodic techno and really big and heavy warehouse stuff, that diversity is something i really admire!

VNTM, your sound is way more melodic than Tahko’s sound, was there a struggle in the studio?

VNTM: Since I am more of a synth/melody guy it would make sense to think that I did the synth work on ‘Rave Culture’ but unlike almost every other project we did together, this time Tahko did the synth work and I made the groove and drums. Like I mentioned sometimes it’s hard to find something that really fits both our sets but I guess we succeeded here.

Coming from Amsterdam, tell us something about the techno scene over there, how is the environment for new producers like you guys?

VNTM: I would say it couldn’t be much better.. there aren’t many places in the world where you are able to see so many different touring artists like in Amsterdam, so it’s very inspiring to see our scene here grow so fast and see so many young guys being picked up by the biggest names in the scene.

Tahko: Amsterdam is always magical, the scene is always moving here. And especially in the summertime you can go out and see so many great artists play on one of our many festivals.

Every October we have the Amsterdam Dance Event and then club season opens. Our clubs are not really huge so you can see a lot of artists in quiet the intimate way.

What are you both up to the upcoming months, gigs, releases etc?

Tahko: I play at Welcome To The Future July 20, Thuishaven Techno Special August 10 and starting my own radio/club concept ‘tales.’.

VNTM: I have done a remix for Eelke Kleijns album track ‘Moments of Clarity’ which will be released August 22 and a new EP on Gem Records called ‘Mystic’ in September.

I will be playing for Tomorrowland (Afterlife) on July 20, Strafwerk (with Pan-Pot) August 17, Vice Festival Bel-gium August 24 and Club Basis with Mind Against on September 27 to name a few.