In Interview with Ellen Allien 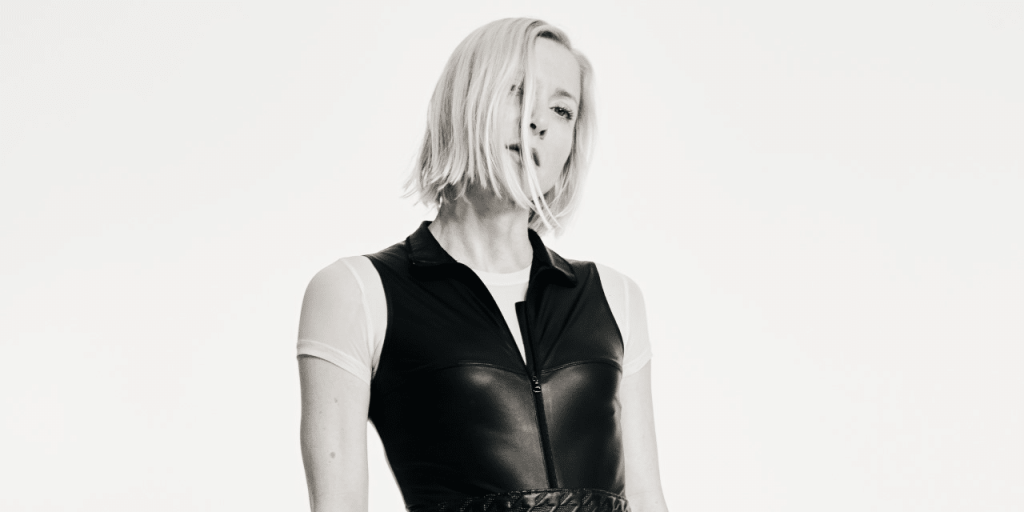 In Interview with Ellen Allien

There’s no other artist able to distinguish themselves quite like Ellen Allien has. No one else has been able to obtain such notoriety with the unique style that she brings. Ellen has been able to differentiate herself from the rest, making her a legend in the techno community. Ellen is your favorite DJ’s favorite DJ; the influence to many artists that we look up to today. Ellen has not only started one label, but two. Besides her widely successful label Bpitch, Ellen also launched her new label UFO. Inc. last January. From having residencies across the world to being one of Berlins biggest acts, she was able to cement her presence in the techno realm.

That unique style mentioned is blatantly intentional in order to make sure she distinguishes herself from the rest of the herd. She has mentioned that she wouldn’t play songs that are popular. She likes to play music that no one else is, make music no one else is, and cultivates projects that no one else is doing. She’s personally involved with everything she does, there’s nothing industry about her. From her own tracks, to the festival stages she curates, Ellen has full creative involvement. Obviously, she’s had help, but she only works with close friends that understand who she is. For example, the graphic designer for Bpitch has been the same since the beginning.

If you have had a chance to listen to Ellen’s sets, either live or on YouTube, you are able to tell how innovative she can be. The way she chooses her music is interesting, because she’s enthralled by weird unpredictable music. She doesn’t focus on the high points or the popularity of a track, which is common among DJs. Instead, she likes music that’s more about intensity. As long as a track is intense, obscure, and unpredictable, it’s one for the collection. Her style of innovation has led her to a very successful career that has no signs of slowing down.

There are a lot of interesting things about Ellen that go beyond her music. Playing around the world, Ellen shared some of her interesting experiences as well as perspectives being one of the most respected names in the techno world. There’s plenty to talk about, and what really captures people’s attention are Ellen’s roots in Germany.

In our interview, we take a deep dive to discuss her music, her culture, and her legacy.

What do you think is the big difference between Berlin, and New York? Is there anything that sticks out the most?

The politics are different. For starters, New York changes so fast. For example, when I first worked down the road here in New York, there was a cool coffee shop where I liked to drink my coffee. I don’t know what it is now, but I use to like having coffee and working on projects in that cafe. Another thing, we lost Output here, I loved that place. Germany is not changing as fast. There’s a consistency there that I appreciate. What New York definitely has is diversity. There are so many different people that come to my shows here and it’s very interesting to see all these groups of people with one common denominator. It goes further than just liking me, it’s liking techno.

Based upon where you’re performing, would you alter your set list?

Every club has their own vibe. As a club designer, they are in charge in making sure that the club is different from everywhere else. I’ve never seen a club here in New York try to copy another club. So, depending on what that club vibe is, it will dictate the music in it because there are different people in it. I wouldn’t play the same set at The Basement that I would at another other local spot like elsewhere. Maybe a few tracks will intertwine, and some of my favorites, but not the entire set.

You’ve had a long fruitful career; can you tell us the best place you’ve ever performed at?

I have some residencies over years. There’s one called the Apolo in Barcelona. The first time they booked me was back in 2001. Ever since then, I’ve been a resident. It’s a very beautiful venue because the size of it. There’s Balconies and wooden floors, it’s very beautiful. The best way to explain it, is that when you walk in, it smells romantic. I’m always fond over old vintage locations and the Apolo does it well.

You decide to release full LPs rather than singles, what dictates that style of release?

For me, it’s a concept. There’s a full idea structured from many. I see myself as a musician outside of being a Dj, so I like to make tracks as a way to bring together my energies. I like the idea that someone can listen to my music and feel my energy. I think it’s easier to do this by bringing together a full package of music if people take the time to listen through all of it. This is my music, and in my music is my life. There’s so much personal stuff that I don’t openly share that I embed into my music. The project “Alientronic” is a handful of emotions I have had. One for example is Empathy, some people don’t have it. I always wondered why people are so strange, that’s where my empathy comes from: Understanding that person.

Do you have any pre-set rituals?

I’m a robot. When I start Djing, I’m in my world. The music keeps it going. I don’t take drugs before my sets. If anything, I take Guarana. It’s this really hairy fruit that grows on trees and it’s stronger than black coffee. It’s a much healthier way to keep your energy. You can’t sleep when you have it. It’s perfect for when you’re really dragging.

Your new music video free society, very abstract and very subliminal. What does the creative process look like?

The video is amazing. I love it because of the community I worked with on it. We all have people in our community that always does one thing or the other. When we come together on a project, it’s so fun because we vibe and create something beautiful with each other. It’s not about the money or the popularity, but it’s because they want to do the best. They want to create the best video every time. That’s something you can see. It’s very delicate, it has a story, and it has an impact. I only work with people that want me to be a part of them. Even with the album artwork and the cd casing.

When I was listening to your sets, I was taken back by the unique song selection. What‘s the process qualifications that you go through in order to add a song to your arsenal?

At the moment, I love the rave attitude. I always try to find techno tracks with unique melodies. Right now, there’s a lot of cool new stuff that reflects on the old 90’s rave style that are coming out now. Anything that’s fast and has this new rave attitude I’m adding to the list. Anything weird, anything with a different beat structure I tend to include in my sets. I also think that electro mixes in well. Rave Classics helps, so do techno classics, and other tracks that are very hard to find. When it comes to playing my own tracks, I like to think that I’m the only one playing this music. If it gets picked up by other DJs and starts to gets played by a lot of people, I get new stuff.

I like the idea that I have a track that’s hard to analyze what’s happening, only when the kick starts and it’s revealed to the crowd the beat of the song. It provides this anxiety and intensity that’s released with songs like that. It’s really fun and it gets the people going. I want to move people. When I see someone on their phone or not with the crowd, I usually try to get them off their phone and involved. I want to give them a reason to be there. 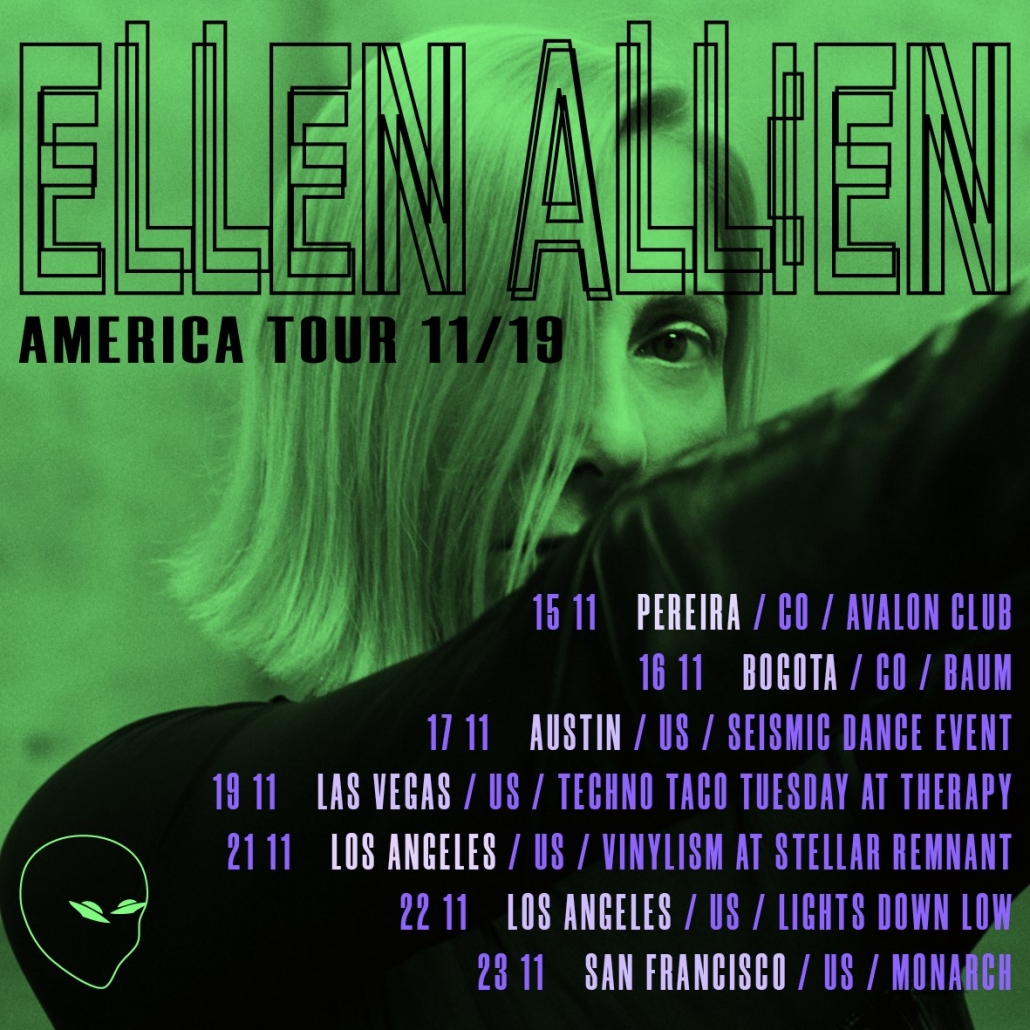 We want to thank Ellen Allien for taking the time to chat with us while she was in New York City recently.

You can catch Ellen Allien in the USA next week, with stops in Austin [Seismic Dance Event], Las Vegas [Techno Taco Tuesday], a very special Vinylism pop-up held at Stellar Remnant in Los Angeles, a performance at Lights Down Low at a TBA location in LA, and finally a stop at San Francisco’s Monarch.