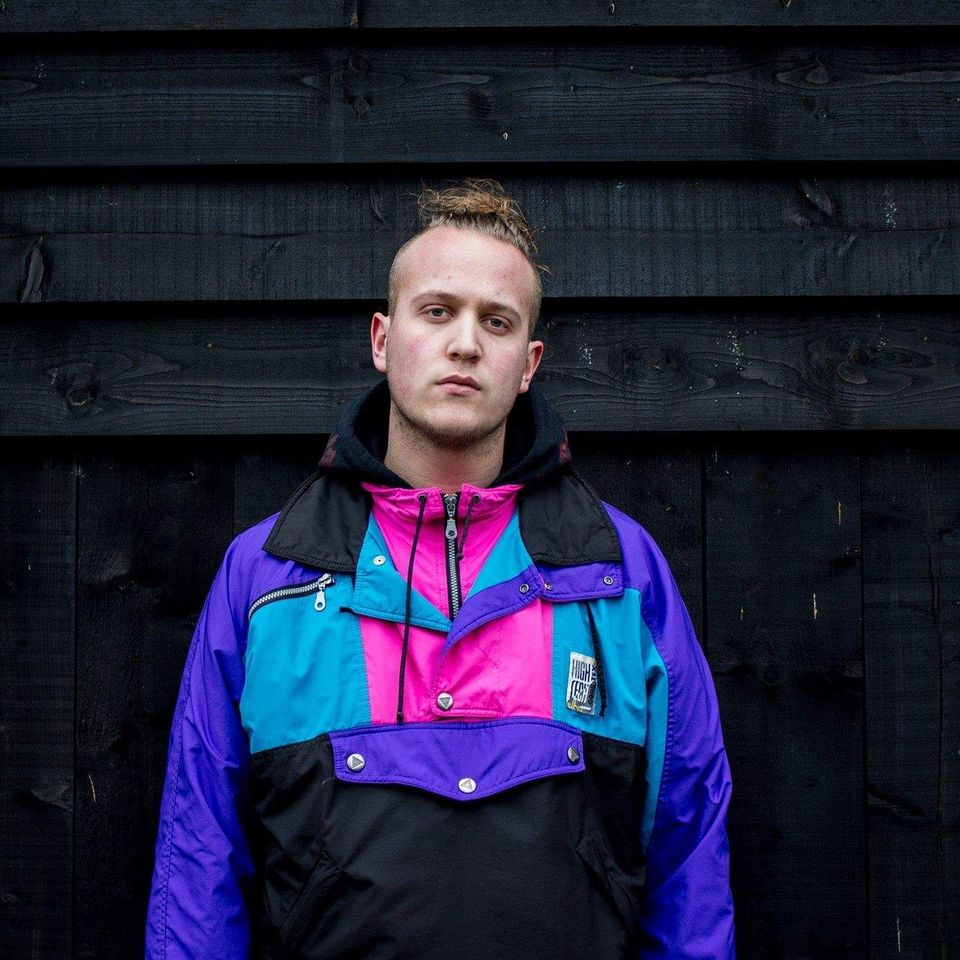 EXHALE’s much anticipated first release continues the legacy of Amelie Lens’ EXHALE event series with a fifteen original track compilation featuring old and new friends from each avenue of the underground, including our premiere from today featuring DYEN.

With a shared love of rave culture, the label is a platform for the forward-thinking while simultaneously paying homage to foundations of techno. With this in mind, Amelie gathers familiar faces and upcoming artists such as DYEN to deliver the future sounds of techno via her EXHALE Records imprint.

Spanning to each dark corner of the technosphere, the compilation fosters a range of sound that exhibits each artist’s production taste and background including Amelie Lens, AIROD, Regal, AhI Iver, Felicie,  SHDW & Obscure Shape, Klangkuenstler, REMY-X, Brecc, Lukas Firtzer, MRD, Mehen (aka Hadone), Francois X, Grace Dahl and of course production virtuoso DYEN, who nods to the EXHALE roots in rave culture with “Fantasy”, a medley of spiked vocals and ethereal synths that maintain the energy until the final kick.

Enjoy the premiere of DYEN “Fantasy” on EXHALE Records below and read on for our exclusive interview with the Dutch producer and DJ.

Hi mate, nice getting to chat with you today! How have you been in this mess of a 2020?

Hi mate, a pleasure to meet you. Well it has been a crazy period for me and for everyone in the music industry of course. It was kind of nice in the beginning to spend some time with family and friends, and spending every day in the studio producing tracks, but after a few months I was getting really sad, missing the travels and playing all over the world. Hopefully we all get to do this soon again (next year I hope) and can see this period as a little break, but it has been really frustrating to be honest.

It’s been a year of ups and downs for sure, lockdowns and restrictions lifted, many changes and uncertainties. However there are some positives too, I am sure. What have those been for you?

Well this period definitely gave me some positive things. I had more time to focus on my music quality wise and finally finish some old projects that I started, including the track in this premiere for you guys. I’m also starting my own label which will be called “RECKLESS”. I am planning some big killer releases, vinyl & digital, which have been really fun to work on and have given me some new motivation to continue working through this crazy period.

Congratulations on the new label! Well as we talk about positives I have to ask: you’re releasing a track on the first EXHALE compilation. What does that mean to you, being featured by Amelie on this V/A with a ton of other great techno talent?

Yeaah finally the time is here to release the track. I have to say I am super happy with this release. To be alongside names such as Amelie Lens, Regal and Airod is insane. They are the people whose tracks are a must in my sets and I am so happy to be part of this project, it’s absolutely one of the highlights for me this year.

Tell us about your track, “Fantasy” What was going on through your head and what were you focusing on when putting it together? Any particular mood or message you wanted to convey?

The track “Fantasy” was written during the second month of the lockdown. I was spending a lot of time in my studio trying to survive without playing gigs.. and somehow I found this little old school vocal saying “just hold back”, and I directly made a nice dreamy pad melody which will bring you into a kind of fantasy world and lets your fantasies go wild ( at least it did with my fantasy, haha) and that’s how I came up with the name.

I was experimenting with other tracks to make a cool heavy bassline, so I thought ‘what would be cool after a long nice dreamy break to slam the track with a hard bassline synth?’, and so the track was finished. I know Amelie likes some hard bassline synths in her sets and so sent it to Amelie, she liked it, and luckily it made it to the beautiful release.

I caught you at Verknipt ADE last year. How much do you miss not being able to be at ADE this time around?

Oooh I miss it very very much, you have no idea! The funny thing is that i was dancing in the crowd the whole night at the Verknipt ADE party in 2018 and to play there the year after that is a thing i would have never dreamed of. It was unbelievable. I brought all my friends and family to the party and I had to open the stage before all the big names such as: Randomer, AnD, I Hate Models – all my idols, so I was a bit nervous. But it was so awesome words can’t describe. Big shoutout to Verknipt for that opportunity.

But the whole ADE concept is great, not only the insane amount of parties, but also all the workshops and meeting points for other organisations and DJs are really good for the industry to meet new people and discover other kinds of music genres.

Also a nice thing is when I visited Awakenings ADE in 2018, it was the first time I heard my own track played at an event by Rebekah b2b Paula Temple in the magical Gashouder. I won’t say I cried but I had a little tear in my eye from happiness (laughs).

Your set was incredibly ravey and fast-paced… as you just mentioned, you were a raver yourself before jumping into music production and DJing right?

Yess indeed I was. I went to my first rave when I was 15 with an ID from a friend of mine. When I was that age I was a bit more into the deep house music with Oliver Heldens and Tchami. All my friends said “You should come with us to a big rave in the Maassilo Rotterdam”. I thought yeah sure, I’m going to dance to some Oliver Heldens music, but they didn’t tell me it was DVS1 with “The Wall of Sound” (laughs). They tricked me and I loved it so much. Since that moment I was at almost every techno event in Rotterdam. And when I have a weekend off I still go to parties with my friends.

Who were some of the first artists you partied to?

One of the first big artists that I raved to was Ben Sims at the Wall of Sound in Rotterdam. One set that’s given me so much inspiration and I can remember so well is MPIA3 (TRUSS) at Reaktor Unpolished in 2017. I was standing there in the amazing Warehouse Elementenstraat and he threw banger after banger and all his famous tracks at such a high pace. His set was really a big motivation to start with producing tracks on a fast bpm with loud kicks.

Also the Dax J set at Nassau festival a few years back was one for the books. His ravey sounds and percussions were amazing and I remember standing there with my friends and saying “Well, what the hell just happened here“, he just nailed it.

Who or what is your biggest musical inspiration these days?

My biggest musical inspirations are from moments I’ve witnessed. For example one of my inspirations is I Hate Models: I saw him playing a few times and also had to play one time after him, and when he was playing I saw so much passion and love for the music he played, it was beautiful to see. Also artists I like are Amelie Lens, Kobosil, Dax J and Rebekah. They are in this scene for a while now and they deliver so many outstanding sets and productions. It’s super inspirational to see and I wish that I’ll be still doing that when I’m here as long as they are. Also, I get a lot of inspiration from going to raves with my friends.

Unfortunately my inspiration level is a bit low to be honest because of this pandemic, but it will come back by listening to tracks from other people and seeing videos of parties I went to.

Can you tell us about some other up-and-coming techno producers we should be on the lookout for?

Ooh there are a bunch of people I like very much. New frames are murdering it at the moment, their productions are mental and I play a lot of their tracks. Also Hadone is taking this scene by storm, his very unique sound and lovely melodies are something everyone likes. Also of course Nico Moreno, who is a beast behind the decks, and is definitely one you should go to a party for.

I am currently play lots of tracks from some younger artists who make beast tracks such as Wzx_o, wav909 & 7th raw and Viol Du Son. All great producers and definitely some to lookout for!

You’re having a breakout period now and your name is getting out there more and more. What advice would you have for aspiring techno producers who look to one day release on an album like EXHALE?

My main advice to everyone who’s making music is to not be shy or nervous about your tracks. If you’re confident with it, send it to everyone you like. You might get 100 times a no or no response and one time a yes or some feedback. And that one time you get yes is very important and gives you some motivation to get a second yes with new tracks or podcasts etc. Don’t think it’s the end of the world when you don’t get a reply from someone you like, just try harder and try to reach more people than only focusing on one person to send your tracks to.

Thank you so much, and congrats again on the release on EXHALE and the upcoming label launch!

Thanks a lot for the interest and the interview, it was a pleasure to meet you and hopefully we see each other soon in a big rave when this period is over!