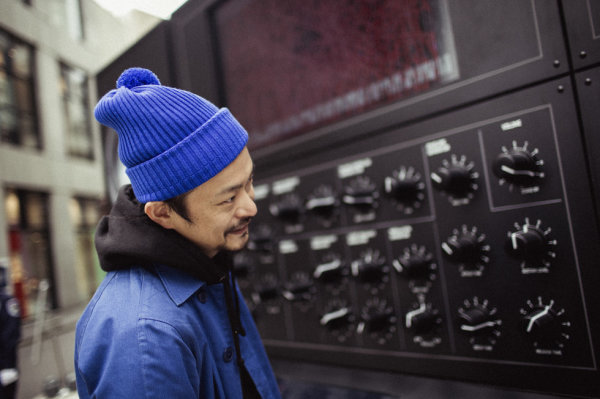 Those walking the streets of Tokyo may have stumbled upon a fascinating synthesizer display recently. It would certainly be hard to not catch the eye, considering the synth is about twice as tall as most people. This amazing human sized synth was developed by Daito Manabe and Rhizomatiks in conjunction with Red Bull Music Academy and iconic audio manufacturer, KORG. Take a look at this brief video to see what happened when they took a piece of studio gear and transformed it into an instrument of the public.

The human sized synth manages to include many great features that are desirable in any normal sized synth such as a keyboard with arpeggiator, X-Y effects unit (similar to that of KORG’s Kaoss Pad series), and a step sequencer for drum patterns. All the power to make a full track available right in the middle of Tokyo, that’s pretty incredible. Manabe kept the user interface relatively simple to encourage all members of the public to participate, even small children. But at the same time included enough options to allow the synth to function normally, and more knowledgeable audiophiles could manipulate the synth to their liking. Below you can find two diagrams provided by RBMA explaining the layout of the synth and functions. 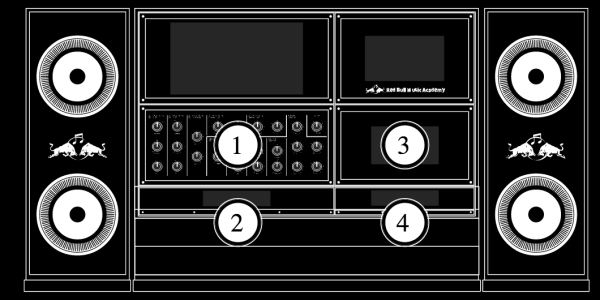 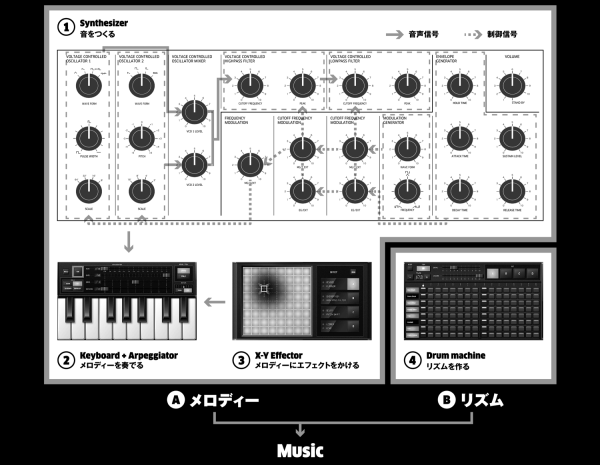 The top picture illustrates what the user sees on the synth itself, and the picture below that is a visual explanation of the features and signal path. Section 1 is the part of the synth with the various parameters commonly found in most synths such as the sound wave oscillators, filters, and envelope adjustments such as attack, sustain, decay, and release.  Sections 2, 3, and 4 are touch screens on the human sized synth, including the specific features such as: the arpeggiated keyboard, the X-Y effects pad, and the drum sequencer.

Music technology exhibitions such as these are a great way to get the public involved and somewhat informed about the gear and processes that go into making music. The human sized synth displayed in Tokyo did just that, and appeared to have people of all backgrounds experimenting with different sound textures and patterns. Probably not the most practical new piece of gear for a home studio, but maybe people will start getting creative and reinvest some time and interest in analog gear.