Paris-based DJ and producer Frank Spector has been around the block in the music industry.  He has his roots in Hip-Hop, his label Get Large Recordz, he has produced tracks for heavy hitters in the US like Nicki Minaj, Mobb Deep, Freeway and Wu-Tang. He has also produced tracks for himself under the alias IMPLSE. His tracks “Prophesy” and “I Know What You Did Last Night” were well-received charting #2, #5 and #16 on Beatport 100. Now he is debuting his latest project under his own name with his Mr Lüvley EP. Spector talks about his transition from hip-hop to techno and his latest project.

Thank you for taking the time to speak with us today. Tell us a little bit about yourself, what made you go from producing hip-hop tracks for Nicki Minaj, Mobb Deep, and Wu-Tang to exploring the underground sounds of techno?

I started DJing at 15,16, playing a lot of Bonzai records, Emmanuel Top’s, DJ Misjah, etc… (Yeah… I’m from North of France, near the Belgium border), so my very, very first love was techno (and going out to clubs like La Bush, etc..). At 20 I was working in a record store and I met two very talented hip-hop heads. Together we created Get Large Recordz (which is still my label company). I spent five years in NYC, and we made music for a lot of artists out there. For Nicki Minaj we produced the track “Keyz under Palm Trees.” Music with the MOBB and the Wu, etc… can be found on our compilation album “Please… Believe it!” (Please… Believe it !!! de Get Large Recordz sur Beatport).

After those five years, I decided to come back to France and start making music for French artists like Booba, Rohff, Soprano, etc… collecting gold and platinum records on my wall, saving money and creating my publishing company (with EMI) and securing a nice distribution deal with Believe. As time passed, I found myself ready for the next challenge! This time, I wanted to come back to my first love: techno. I like to say that yes I’m hip-hop rooted but definitely a techno degenerate! And for me, you wouldn’t find this tribal, almost primal energy, anywhere else but in Techno!!! 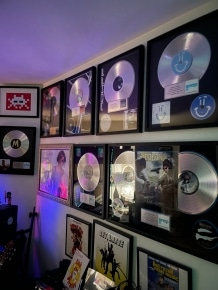 With this past year being the way it was, how have you been spending your time?
Only one thing: music, music and music!!! I released almost 13 projects during this time and now I can say that… a lot of them suck haha!!!

I want those tracks FAT and BOUNCY!!!!

Frank Spector on his sound

Your new track “Tü Times” is out soon, can you describe how this track and EP came about?
I wanted to create something…. very energetic and different from what I was doing with IMPLSE (my other alias). The Prophesy EPs (very classic spatial, driving, Beatport’s 100 ready). I’m a big fan of Sebastian Groth, 999999999, DJ T-1000, etc… and Charlie Sparks. Oh and I have to confess that I stole a kick from him for the EP… Oops, hope he’ll forgive me.

What’s your creative process when writing new music?
Kicks and bassline first (those come pretty fast) After this I like to play around with Serum, Massive, Sylenth, etc… I can spend hours trying to find a catchy melody with a good synth. Followed by hats, claps, percussion, etc… and last but not least (very important for me) the FXs!!

Were there any particular sounds or feelings you were trying to evoke with it?
I didn’t want to go too hard, so I tried to keep the bpm around 140, 142 (not always easy!), and very important: I want those tracks FAT and BOUNCY!!!! I like “my techno” like that, and I think “Tü Times” can be described like this (plus that 90’s Euro Dance Hit Machine “2 Times” flavor hehe!!

What is the best advice you have ever received as it relates to your career as a music artist?
Secure your business first!!! Own your publishing, create your label, do your marketing, distribution, etc… OWN YOUR SH*T

Finally, what are your plans for the rest of the year? Anything big coming up?
Focusing on releasing some music GOOD enough to get nice gigs to play them (HARD!!!) Doing more streaming videos, more collabs, trying to be a better man (hahaha) and…making babies!!! :D Voila!!!!