Would You Save a Vinyl Collection From The Scorching Sun? 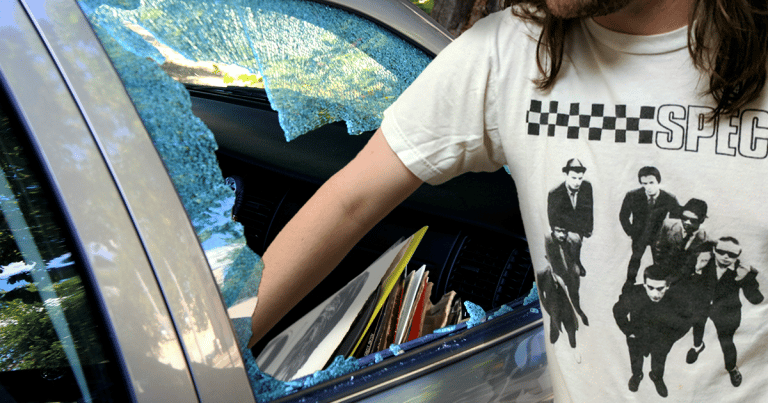 Would You Save a Vinyl Collection From The Scorching Sun?

Note: This is a fictional piece based on a satire article, written to ask ourselves one simple question: how much of a vinyl lover are you?

It was particularly hot Saturday afternoon in Phoenix, United States when a local Superman of sorts, a hero no doubt, spotted a crate of vinyl records sitting in an empty 2005 Suzuki Aerio on the way back from a trip to the local ice cream parlor. His alarm bells started ringing. He was suddenly faced with one of his worst fears. Should he take action or should he move on with his life and let the owner of the records deal with his fate?

Most people would have continued with their daily errands but the man in question isn’t “most people”. He  is vinyl enthusiast Nate Adams. A man with morals. A man with principles. It had been particularly hot in Phoenix all summer and that day temperatures had reached triple digits. He had to take action, and fast.

“It was, like, 100 degrees,” stated Adams. “Vinyl can get warped at, like, 80 degrees, and it will never sound the same again. I knew I had to do something. So, I picked up a rock and threw it through the window. I just did what any other vinyl lover would do.”

Imagine this: a crate filled with 17 vinyl records and 13 cassette tapes, including albums by the Ramones, the Sex Pistols, and Fugazi, all left defenseless under the scorching Arizona summer heat, compounded by the green house effects of the car interior. Hadn’t it been for Adams it’s likely they would have all perished, but instead he was able to save them all except for a No Doubt Tragic Kingdom CD without a jewel case.

“It just makes me sick, you know?” said Adams. “The fact that there are people like that in the world with no regard for what’s safe or what’s right. It’s a goddamn shame. The window can be replaced, but there were some original pressings in that crate that could never be replaced, unless you have a really good day on eBay.”

Witnesses at the scene reported that Adams stayed with the records until police arrived, ensuring they were in safe hands throughout — the hallmark of a true vinyl lover.

“He cradled them in his arms comfortingly, and took each one out of its dust sleeve and inspected it carefully for any warping,” said bystander Theresa Worthington in a statement. “When the owner came back, neither of them were very happy with each other, but, thankfully, the police were there to keep everything calm.”

The owner was reportedly quick to defend his actions and attack Adams, an unjustified response in our eyes considering Adams’ heroics and altruism.

So… would you save a vinyl collection from the scorching sun?

Inspired by: The Hard Times