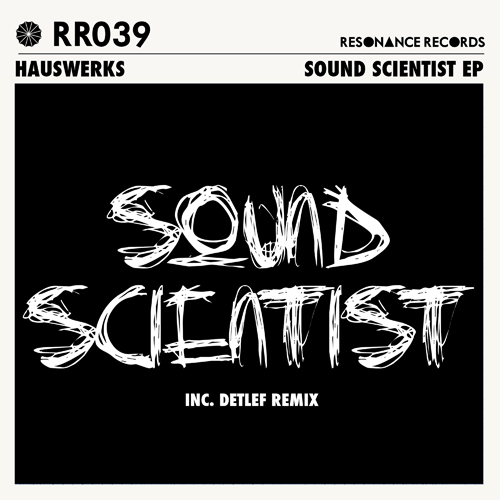 Hauswerks returns to Resonance Records with a phenomenal 4-track EP, and we’re especially impressed with this one. One of UK’s most versatile electronic artists, Hauswerks has rocked studios and dance floors around the world. The Sound Scientist includes three dance floor-ready tracks and a remix by Detlef (VIVa Warriors). Although he has released records on a number of labels, such as VIVa Limited, Secret Life, and Moda Black, Hauswerks has time and again turned to the Resonance crew to handle his releases. The EP comes right off the back with a Doorly collaboration on Hot Creation, which topped the charts for weeks.

The first track, The Sound Scientist, features a deep rolling bassline perfect for the warehouse, basement, or after-hours terrace, and out of the four tracks on the EP, this one comes closest to that classic Hauswerks signature sound that we’ve all grown to love. However, the style remains consistent throughout, with Groove Love delivering a deep groove that fits right in the pocket of the track, sitting right underneath lush, soulful synthesizers. Everyone is a bubbly jam with hard-punching rhythms, sure to get your feet (and your asses) moving. Finally, Detlef’s remix of The Sound Scientist goes in a much darker direction, evoking sounds and rhythms of generations past, and it is very easy to hear the influence of Detroit, Chicago, London, and NYC.