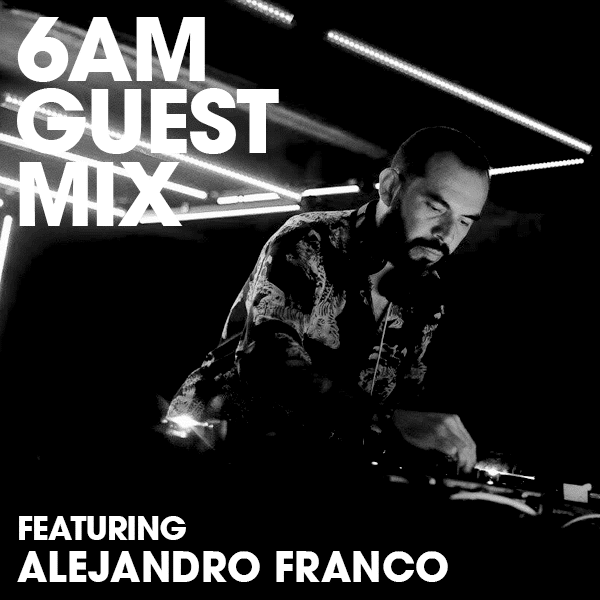 Alejandro Franco is a Mexican DJ, producer, journalist, publisher of WARP magazine, head of CommonSense Records, and founder of Guadalupe Valley Festival. After years of an evolving sound, this holistic storyteller’s musical journey has now become a mental travel through some of the finest cutting-edge Hi-Fi Techno.

This mix is a one-hour live recording from Alejandro’s set at Foro Normandie in Mexico City.

Hi Alejandro, thanks for taking the time to chat with us today. Can you tell us a bit about your background in the music industry and how the journey eventually lead you into electronic music specifically with Techno and House?

For me it all started with radio. Before I finished high school, I was already involved in school radio projects and actually I chose my University because of their good reputation on the subject. Since 2001, I’ve been working as a professional radio host uninterruptedly in W Radio, broadcasting in all México. Radio also made me a music journalist and lead me to be an audiovisual content producer and director. Also help me to work for several editorial projects, until 2006 when I founded WARP, an online and printed magazine regarding music and creative industries.

At least 15 years ago, I also started playing as a DJ in several parties and nightclubs because of the need to still communicate through music as in my radio show. For me, make a music selection for a couple of hours wasn´t a big challenge as I used to be music programmer on air. It all started first as a “selectah”, doing very rough cuts between one track and the next one, more close to hip hop style than a proper electronic DJ set. That is why my stage name was SLKTR (selector) and I used to play rock, hip hop and electronic at least two or three times per week. Years after and because of my teenage influences with electronic music in the ’90s (the big names), I decided to focus only on House and Techno music. And being even more precise, after I played in Bassiani in Tbilisi, Georgia, everything changed and I turned almost completely to a specific Techno sound.

Tell us about the mix you made, where was it recorded and what kind of mood were you trying to portray through these selections?

It was recently recorded at Foro Normandie in México City, when I closed the night after the amazing live set from 999999999. I just tried to follow the energy and little by little, make it mine.

You recently wrapped up the 4th annual Guadalupe Valley Food & Music Festival in Baja California (Ensenada). What was the experience like this year? How would you best describe this festival to someone who has never been?

Well, it is indeed an experience. Food & Music coming together in a proper chef’s and musician’s line up. I have this theory that if you like good music, you should also like good food and vice-versa. That explains (for me at least) why DJs and chefs are such good friends all over the world. This “feastival”, as we call it, takes place in Ensenada, in the middle of the most important wine country in México, Valle de Guadalupe, so it is full of wine from the region, the best food (included in the ticket) from México and other places of the world and amazing music such as UNKLE (Live) who performed this year as headliner.

It’s great you’re contributing such an amazing festival in Baja California, Mexico but the real techno work takes place in your hometown of Mexico City. What are your thoughts about the current underground scene there? And what do you hope to contribute to help it grow?

Yeah, actually my dream is to start booking more Techno acts for Valle de Guadalupe in the upcoming editions but that will happen eventually as Techno is becoming big again in the global map. Some parts of México are already there, some clubs and some cities. Unfortunately, México City has been living a security crisis in the past few years so we don’t have a single proper Techno club in the City; not specialized at least. That makes us very similar to your own scene in LA, I think.

Good news is the underground scene is happening every weekend in very special places and venues, such as Ex Fabrica de Harina and Foro Normandie. Techno collectives, LGBTQ+ parties, national, regional and international lineups, we already have that. So what we are trying to achieve is to make this scene stronger with very well curated parties and developing concepts that could work inside and outside México. Our value in this movement, is on the quality, the sound and the production.

With the recent artist bookings you had this year such as DAX J, Etapp Kyle and 999999999, is this something we can expect more of in Mexico City which in the coming year?

We also had DJ Nobu, Peter Van Hoesen this year and Bassiani party with Etapp, Dax and NDRX (Bassiani’s resident). Function is coming also and hopefully, we’ll have some surprises for December.

2020 must be the consolidation of our booking efforts with four label nights through the year, one new bimonthly concept called “Mental” and a proper Techno festival in the city. Fingers crossed!

Asides from the one-off shows mentioned above, you also have an event series called MENTAL which showcases more regional and local techno artists, can you tell us more about the vision behind MENTAL?

Mental born for me as an inspiration from Semantica’s showcase in ADE 2018. That Svreca’s sound and the whole work with his label worked inside me as a propulsor to bring this sound into México. More than local and regional lineups, we are in permanent search of the sound. If it goes inside your mind and puts you in a trance state, that will do the fix.

The forthcoming launch of your new Techno label, CommonSense Records, is aiming to make an impact both locally and internationally. Can you share with us some of the first few artists who will release on the label? And what specific sound are you trying to produce and promote through the label?

Yeah of course. Technically this will be our second Compilation but will be the first one heading on the right path to the sound we want to bring to our home. Our events are working very well in terms of alliances and collaborations, so we have tracks from DJ Nobu, Peter Van Hoesen and our friend Juan Sánchez from Format Records in Amsterdam. We also have Doctrina Natura from Spain and our own Mexican sound crew.

What are some of the challenges and obstacles faced when throwing techno events in Mexico City?

Security issues, the mob, corruption and sometimes not very open audiences, but that tends to improve.

As someone who is heavily contributing to the growth of Techno in Mexico City through your bookings and record label, what do you wish to accomplish in the next couple of years as the scene matures a bit?

Constancy is the first goal. I guess Mexico City’s scene is going to be very interesting in a couple of years from now, as there are a lot of good people working to build something really solid and stable. For now having a good pace is a challenge, but local collectives are demonstrating that unity is the best path to make a movement to grow. Techno music as a cultural tool is stronger than violence, uncertainty and bad governments.