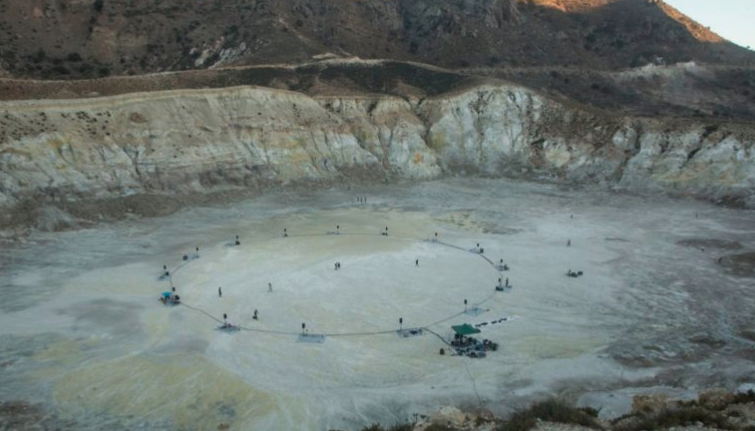 We recently featured what we considered to be the most unique festival destinations in the entire world, ranging from remote islands to world-renowned TV/movie sets, and enchanted castles to a disused limestone quarry. And while a handful of Secret Solstice Festival attendees got to party inside a dormant volcano this past June, a Greek music collective took it a step further by organizing a party in an active volcano.

The event, called 634 Minutes Inside a Volcano, was organized through a collaboration between  the Onassis Cultural Center and six d.o.g.s, a creative arts space in the Greek capital of Athens that recently launched its own imprint.

The New York Times reported that a total of 15 experimental artists gathered inside the Stefanos Crater in Volcano Valley, Nisyros, a Greek island in the Aegean Sea to play classical, jazz, and electronic music. Playing for 10 1/2 hours beginning at dusk, they performed on electric guitar, piano, clarinet and synthesizer, as well as sample loops, and traditional eastern Mediterranean instruments like the oud and the kanonaki. The result, as reported by the NYT, “was an immersive layering of experimental, otherworldly soundscapes, evocative one minute of Sun Ra, the next of Aphex Twin or Autechre.”

Six d.o.g.s owner and artistic director Konstantinos Dagritziko was the mastermind behind the unique project, inspired by the island’s volcanic terrain, remoteness and unique setting.

“It’s completely unique, basically the closest you can get to the center of the earth,” Dagritzikos told the Times. “And if you realize where you are, that around those walls lava erupted 20,000 years ago and this whole island was created, it’s just mind-blowing.”

six d.o.g.s are planning to release exclusive audio from the entire event, so ensure you follow them for updates.