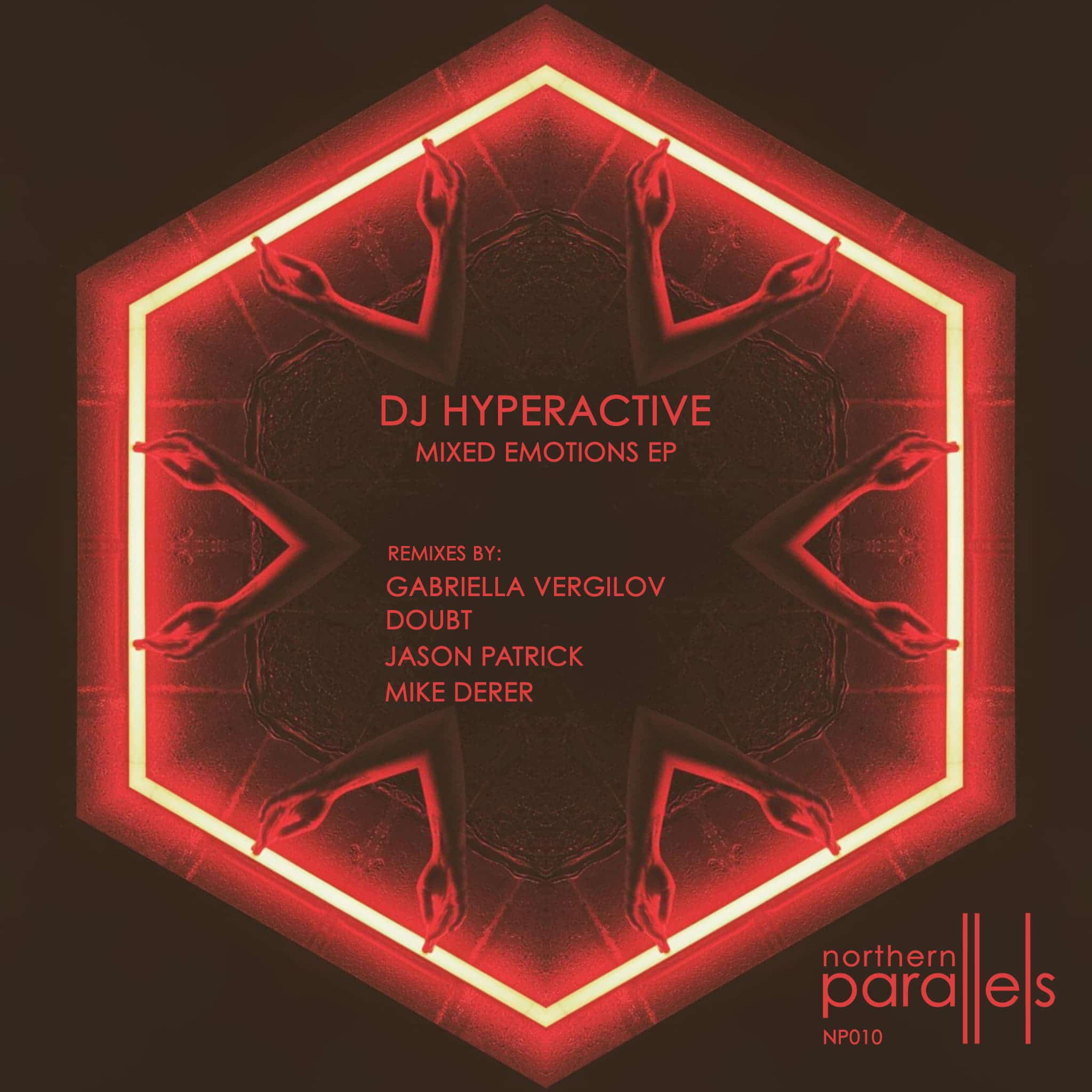 The Godfather of Chicago Techno, DJ Hyperactive, returns to Northern Parallels with a track that chugs and snaps through the darkness. Acid pads reverberate throughout “Mixed Emotions,”  tumbling over a swinging and unrelenting kick. Growing layers of rhythmic accents dodge in and out while the synth grows busier and more frantic.

Gabriella Vergilov’s Natural Remix breaths fiery soul into the beating heart. A bare melody set this track apart from the previous instrumental pieces. The melody is provided by undulating synth lines that hover over a doubled up kick. Gabriella provides the vocals and they are as natural as the title implies.

Doubt makes his debut on Northern Parallels with previous released music on DVS1’s Mistress Recordings imprint. Doubt provides a stripped down version to reveal a chrome dipped skeleton. Dry and sparse percussion, the mix takes on the mood of a mad scientist’s laboratory.

Label boss, Mike Derer wraps up the EP with a remix maintaining the feel of the original and also adding dubbed out synth line. The track launches when the percussion take over an already rollicking kick. Mike’s stripped down sound reflects the mind of the machine and blares its steely emotions.

Check out DJ Hyperactive’ Global Vibe Radio mix and interview HERE, where we explored the Godfather of Chicago Techno’s roots in the Midwest, his relationship with Los Angeles and more.

Those versed in the history of techno need little introduction to DJ Hyperactive as an artist. His Resident Advisor bio describes him as one of Daft Punk’s “Teachers” and “brother of the humble,” his contributions and impact to the underground spanning three decades now and leaving a legacy that has not only helped shape techno in Chicago and the Midwest, but the entire United States and beyond.

Growing up in Chicago in the early ’90s, DJ Hyperactive honed his skills as both a producer and DJ, receiving instant international recognition and subsequent touring gigs at some of the most recognized and revered venues and events of the last 20-plus years, including Orbit in Leeds, Liquid Room in Tokyo, Berlin’s iconic Love Parade, the game-changing Interface parties spearheaded by Droid Behavior in Los Angeles, Movement Detroit festival in the birth place of techno, Output in Brooklyn, techno meccas in Berlin such as Tresor and Berghain and of course at Smartbar, Spybar and Primary right in his home city of Chicago. It is no surprise then, that he has been dubbed The Godfather of Chicago Techno.

Over the course of his career he has churned out well over 100 remixes and original tracks, his catalogue including such instant classics as “Venus” and “Wide Open” on Missile, “25HRs” on Droid Recordings, “Music Box’ on his own imprint 4 Track Recordings, and more on imprints the likes of Contact, Truncate, Figure, Blank Code, Impact Mechanics, Nachstrom Schallplatten, and CLR, just to name a few. After a warming stint in Southern California, DJ Hyperactive returned to Chicago 2013 to reconnect with his family and musical roots.  His story continues with more gigs and more studio productions, with the difference being the experience and perspective that only a true veteran can possess.