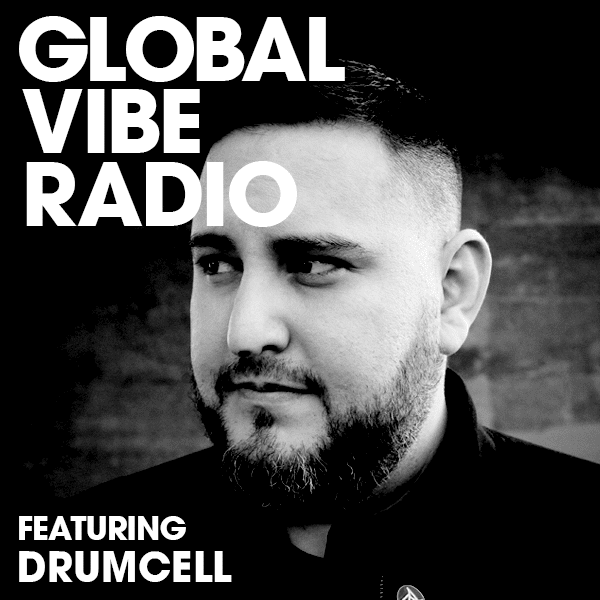 They say all great things are worth waiting for, and we couldn’t agree more on a day when we are able to welcome Los Angeles techno flag-bearer Drumcell for his first Global Vibe Radio mix.

Drumcell was born as Moe Espinosa in LA’ San Gabriel Valley. Far away from the glamour and glitter of Hollywood, he cut his teeth growing up in a vibrant, culturally diverse neighborhood that still breeds inspiration for his work.

To say that Drumcell’s work as a curator is synonymous with the Los Angeles techno scene as we know it today would be an understatement. First as co-founder of Droid Behavior, the label that ultimately gave birth to the infamous now-defunct Interface event series, and more recently as co-founder of Observe, Drumcell has been active in curating avant-garde techno events for decades. It is these events, as well as Drumcell’s own productions, that have not only put LA on the international techno map, but have inspired countless other artists and event curators (6AM included) to contribute to their local techno scenes.

A classically trained musician in his youth, Moe came to circulate around the Noise, Punk and Industrial scene, playing guitar and singing in various bands until he discovered the early ‘90s LA rave scene.

That was when he got in touch with some of the heroic synthesizers of techno’s early years. His enthusiasm for those synthetic sounds lead to a career as a Product Specialist at Native Instruments and to independent musician and engineer work across Los Angeles. Some of his studio contributions include work for Alessandro Cortini of Nine Inch Nails, Maynard James Keenan of Tool, Douglas McCarthy of Nitzer Ebb, Gary Numan, George Clinton, Kool Keith, Qbert, and Cut Chemist.

By then, Moe was chuffed to pursue his own productions. When he handed out his first self-produced, self-pressed vinyls at the DEMF in 2001, he heard them being played from the festival stages the very next day. Since then, he has released original productions or remixes on DROID, CLR, Electric Deluxe, Dystopian, Torque, Silent Steps, Blank Code, Ibadan, Detroit Underground, and more. This style has caught the attention of many of the world’s top techno jocks, with strong track support from the likes of Luke Slater, Speedy J, and Chris Leibing. This style has also reached numerous prestigious international clubs and festivals. From Berlin’s techno mecca Berghain to the main stage of Movement in Detroit to North American nightclubs like Output and Stereo to festivals across Europe, Latin America, Japan and Australia – Drumcell’s sound is being heard around the world.

In 2016, Drumcell debuted his ambient project HYPOXIA on his experimental label BL_K NOISE, producing infinite movement with his Buchla and Eurorack systems. Hypoxia all hardware performance have been heard at highly curated atmospheres from Atonal and Berghain in Berlin to Brooklyn’s Greyscale Series at Output to pop-up concerts on the LA River.

Drumcell explores and discovers the analogue world as much as the digital world of music production, to finally combine them into his very own raw, suspenseful and hypnotic style, as this Global Vibe Radio mix perfectly illustrates. Influenced by a myriad of music as well as science fiction and machines, he has developed an addiction to analog synthesis which has led to ceaseless experiments in his studio in search of new, mind-expanding sounds. As one of the most esoteric techno artists in North America, his sound disregards genre limitations and is everything but conventional techno.