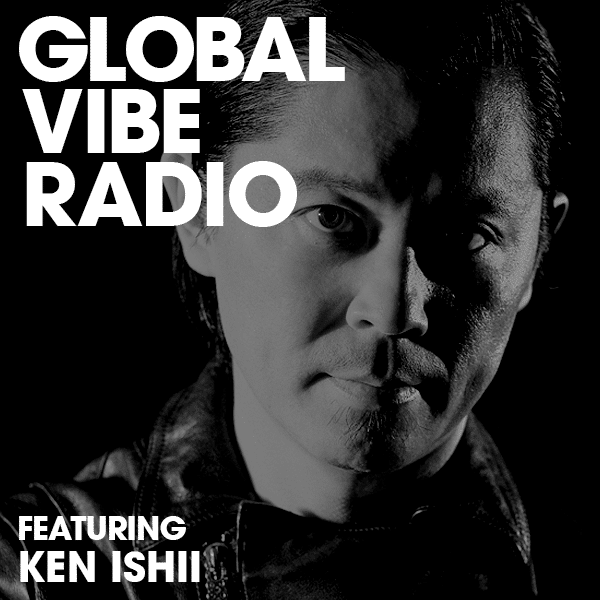 We are extremely proud to welcome Ken Ishii back to Global Vibe Radio for an exclusive interview and his second mix on our longest-running mix series. The honor is special, as he is the first artist to be invited back for a second GVR mix.

Ken Ishii’s career began back in ’93 when his first release found a home on the iconic Belgian R&S Records imprint, shooting straight to Number 1 on the NME Techno Charts and gaining him instant global recognition.

What followed has been an illustrious career in music production and DJing, with releases on a wide range of world-renowned labels and the founding of his very own 70Drums Records imprint. It is no surprise then that Ken has been regarded internationally as one of the Japanese pioneers who can create world-class electronic sounds.

In 1998, he produced the official theme song for the winter Olympics in Nagano, Japan, which was subsequently played in more than 140 countries around the world. Then in 2000, Ken was interviewed and was on the cover of Newsweek magazine, featured as a symbol of the Japanese new culture. This was acclaimed as a great undertaking by a dance/electronic music artist.

Ken also produces music for films, such as doing the theme song and soundtrack for the monster hit Japanese film ‘Whiteout’ in 2000, which led him to be nominated in Japan Academy Awards. He then expanded to producing music for video games. Rez, the game Ken contributed his exclusive tracks to, became a cult hit. In 2005, he reached a major achievement in being in charge of the music and designing an exclusive 12.2 surround sound system for the Seto-Nihon Pavilion, enforced by the Japanese Government, at World Expo in Aichi, Japan. More recently, he produced the official soundtrack for the 40 Year Anniversary of the iconic PAC-MAN.

Throughout this time, Ken has continued to churn out timeless techno tracks, touring the world and building an important axis in the world of techno between his home in Japan and Europe/Detroit, often inviting artists over to perform and receiving a return invitation back to some of the world’s best techno clubs and festivals.

To call Ken Ishii a Japanese techno legend would be an understatement, for he truly represents the genre on a global scale, and we get a definite sense of that in our interview with him.

Enjoy the mix below, as well as our exclusive interview with Ken Ishii.

Hi, thanks for making time for this interview. Before we jump into musical goodness, we have something in common: a love for craft beer, particularly IPA. Has time off the road allowed you to dive more into this part of your life?

Always welcome. Yes, I have been taking more craft beer quantity-wise, but not trying so many kinds out. It was my hobby to find and buy local craft beers where I visit to play and bring them home in Japan. I miss this part of touring.

Are you welcoming the change in pace (life at home vs. on the road) or has it been challenging at times?

I do miss DJing and touring, of course, because I had been doing it non-stop for over twenty years. This is really the first time to stop it for such a long time. However, I’m getting used to this situation. I try to take it as an opportunity to have more time to produce music, learn new equipment and software, and spend time with my family.

Music is the gift that keeps on giving, and we’re super excited to have you as part of our Global Vibe radio podcast. What can listeners expect from this mix?

That’s right. You can’t stop your music life. I would say this mix is my blend of techno – something with energy and new musical ideas. I included a few of my recent works and near-future releases.

You’ve mentioned you find joy in making interesting sounds. Have you made any cool discoveries while working in the studio you otherwise might not have made if touring? Anything that made you go “Whoa!”?

When I’m continuously on tour the music I produce tends to be influenced by my DJ experiences and it could be more beat oriented. Now I’m more into pure synthesizer sounds, especially into old stuff I used to admire when I was a kid. I was a Yellow Magic Orchestra maniac around 1980. It’s impossible to collect all those hardware but I dig up unheard and weird sounds from the software emulations. Prophet 5, Synclavier, Buchla Easel etc. Great sources of inspiration.

With touring at a stop, live streams are all the rage. They’ve been giving fans something to look forward to, but there are big-name DJs playing raves in front of live audiences throughout certain regions (Spain, Greece, Italy, France). Those same regions are seeing a spike in COVID-19 cases. Do you have any thoughts on DJs playing during a pandemic?

Well, I think it depends on the region – on how severe the COVID situation is and how precautious the people are there. I restarted playing in July here in Japan. It can be possible only with tight regulations for indoor and outdoor venues and crowd such as a limited capacity, taking temperature and sanitizing hands at door, and wearing a face mask all the time etc. It seems to be working so far, maybe because the COVID case is less severe and people tend to respect the regulations in Japan. All I see from a DJ booth is people wearing a face mask and keeping social distance, which is a bit weird though. However, I totally understand there is a discussion because the risk of infection can not be zero. It is a difficult subject.

The creative process is like a rollercoaster with ups and downs. What’s helped you keep your creative spark alive, especially during a time with so many unknowns and heavy social unrest?

Sticking to what I really love and believe in. I don’t really care about what other people are doing, so not much time on social media. Music-wise, at this time, you don’t have to be tied up with a musical trend because people don’t go out for parties and there is no real trend. In a way, it’s more free for what you create than usual.

If you’re stuck on a track, what do you do to get back on track (no pun intended)? How do you clear your mind?

Simple. Drink a few bottles of my favorite IPA!

You have decades of studio time and DJ sets logged in. You’ve paid your dues yet continue to work hard. With so many aspiring artists on the horizon, what can help them stand out from the saturated DJ/producer market?

To be different from anybody else as a producer/DJ and to be polite and respectful as a person.

Outside of the electronic world, who has musically inspired you?

Steve Reich. I discover something new every time I listen to his music.

Check out my upcoming releases later this year on labels like Harthouse, Electropical, U/M/A/A, Conform, Different Is Different, Persistent, and my own Bandcamp, where I regularly release ‘Unreleased Works’ series on.

One last question…..when will Americans have a chance to sip your KIKK IPA? Any plans for international distribution?

That’s my next dream – international distribution of my beer! I’m doing a meeting with the brewery shortly and will talk about it. I’m planning to brew different IPA with them later as well.