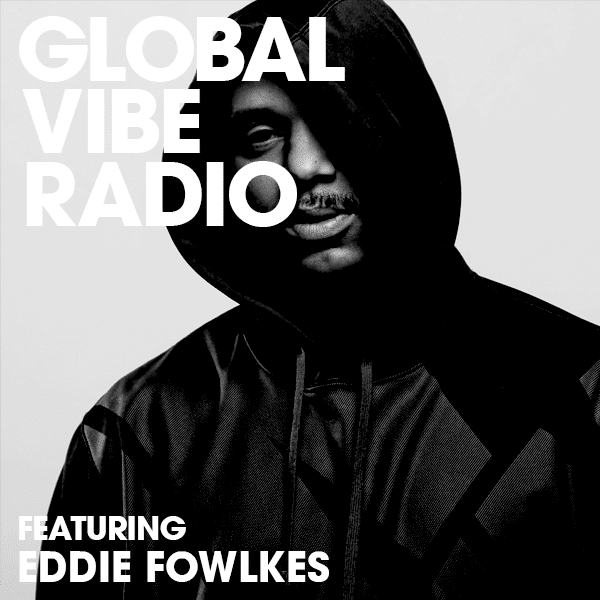 It’s an honor to welcome Detroit Techno Originator Eddie Fowlkes to the Global Vibe Radio family with this recording of his live stream for us on July 22nd, 2020.

Eddie Fowlkes is the history of Detroit Techno and not just because his handprints are cemented in the Detroit Historical Museum’s “Legends Plaza.” His 30+ years of moving a dancefloor and his 150+ deep catalog of soulful classics speak for themselves. After attending a 1978 Charivari party with his older sisters, where he saw DJ Darryl Shannon mixing records, Eddie requested a mixer for Christmas. From that time on, he mastered the art of DJing leading to his first release in 1986. That release on Metroplex Records, “Goodbye Kiss,” helped establish what would come to be known as Detroit Techno.

In the 1980s, he performed with three turntables, a mixer, wah-wah pedal and the 808 & 909 drum machines. That revolutionary style of DJing pushed the boundaries of what a disc jockey could be. In 1993, Eddie Fowlkes coined a name for his distinct sound: Techno Soul. Techno Soul is Detroit techno, 70s funk, the Motown sound, Parliament, and Chicago house. Eddie’s DJ sets reflect his productions that are an evolution in one track, from house to techno, and back again. Eddie has many recordings and remixes on major labels and independents (Elektra Records, Sony, BMG, Warner Brothers, Azuli, Tresor, P.I.A.S), dating back to 1989.

Of the Detroit originators, Eddie is not simply just a great DJ or just a great producer; he is equally strong in both avenues. Eddie never rested on his laurels, but has always worked hard. He continues to create, push boundaries, and release music on his two imprints (City Boy Records and Detroit Wax Records), to move dancefloors worldwide, and to represent Detroit musical talent at it’s best.