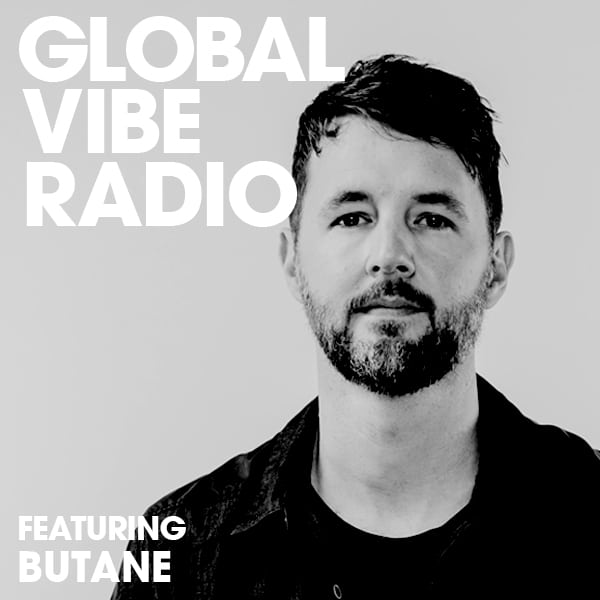 For Global Vibe Radio‘s 163th play we are treated with a Butane live set recording from Ten Years of Little Helpers label showcase at this year’s Miami Music Week.

A firm believer that the long hours of studio work keep a musician grounded, Butane boasts an impressive discography, released by some of the most highly regarded labels in the business, such as Damian Lazarus’ Crosstown Rebels, Dubfire’s Sci+Tec, Jamie Jones’ Hottrax, M.A.N.D.Y.’s Get Physical, and more. As a label owner, he’s the founder of three influential underground dance music imprints of his own: Alphahouse, Little Helpers, and his new Extrasketch project.

Little Helpers, founded by Butane and Someone Else in 2009, has won a reputation over the past decade for being an underground dance music label par excellence. Recently named by Mixmag as one of its Top-50 labels of the last ten years, it has firmly established itself as a go-to imprint for DJs who value deep, timeless, functional dance music.

Whether breaking undiscovered talent to the international market, or releasing EPs from accomplished pros, Little Helpers and Butane march relentlessly forward to the drumbeat of quality.

As we present to you the live recording from the label’s milestone celebration party in Miami, we also had a chat with Butane to discuss all things related to the label, Miami Music Week, and his passion for food and wine.

Hello mate, nice getting to chat with you again! How have you been?

How would you define 2019 so far for you, in just three words?

Thanks for the mix, really appreciate it. Can you talk us through it a bit? Where you made, it how, what was going on through your head…

This is a bit of my DJ set from our Ten Years of Little Helpers party at this year’s Miami Music Week. We had a really killer event at Do Not Sit in South Beach. Great crowd on Tuesday night to kick off the week. I played a little B2B with Stefano Noferini, then took over solo for an hour before Alexi Delano closed the night out. This is the solo portion of my set. It was getting later in the night, the room was packed and people were jamming. At that moment I wanted to get a bit more musical and wonky. It went over great in the club. Hope it translates well to the internet. That’s never guaranteed.

What have been your favorite tracks so far this year?

I’m one of those DJs who used to black out the artist and track titles on my vinyl with a Sharpie. I’ve actually turned down podcast requests because they require submitting a tracklisting with the recording. Do you think I’m just going to tweet out my secrets? Get to digging you scoundrels.

Any standout new producers you think we should keep an eye and ear open for?

I will keep this completely in-house. We have plenty of releases coming on Little Helpers from up-and-comers to keep an eye on who I should mention here. Next up for the label: Poor Pay Rich, Arkady Antsyrev, Roi Okev, REME, Lucio Agustin, Riko Forinson, Odd Man Out, Alexandro G & Bastien Groove.

In April you asked on your Facebook if DJs practiced their DJ moves in front of a mirror. Be honest: have you? What would you say the signature “Butane” move is?

Ha! No way. I go days at a time without looking at myself in a mirror, and my soon-to-be wife can surely attest to this fact. The signature Butane move is definitely just looking down at the mixer and working! You shouldn’t be looking at me anyway. The party is on the dance floor with your friends, not in the DJ booth.

A lot has been changing in Miami around WMC/MMW. It used to be a true industry gathering a decade ago, and then just became a series of parties, although this past year Ultra took control of WMC and revamped it, only to lose Miami as the city to host the festival itself last week. How was your overall week experience there this year, and do you see that weekend becoming as important as it used to be for the industry in the coming years?

Well, considering I flew down Tuesday for our Little Helpers event, and flew home to San Francisco on Wednesday, maybe I’m not the best person to ask? Or maybe that tells you all you need to know about how I think of the utility of the week at this stage in my career. I dunno.. I’m really zoned in on my studio work right now, and I have plenty of distribution channels for my music.

For youngsters though, up and comers who are looking to get more involved in the business, I do still think it’s one of the most important industry networking weeks in North America. It’s just that now everyone is a DJ and they all have their own parties. 15 years ago there were far fewer events, all put on by bigger labels and promoters. It has become a bit more atomized and people can get very spread out. My advice – go down with a group of friends and enjoy the parties. Enjoy Miami. Don’t put too much pressure on yourself trying to network. Try to make natural connections with people instead of chasing around famous DJs in hopes of introducing yourself. Those random party kids you meet on the dancefloor are probably the industry’s next big thing anyway.

Thanks for the advice! Where do you see the label going in 10 years from now?

That’s a great question. We’re definitely evolving, and I think that’s generally a good thing. There are always real-life circumstances behind the scenes that might affect whether we make it another 10 years, but I think that’s true of everything one does in life. Not many labels make it 10, much less 20 years. We just take it one year at a time. That’s how we’ve always operated and it’s served us well thus far.

I hope we continue for another 10, but that would put me at almost 50 years old and over 500 releases presumably. Do I even want that? Yikes.

A lot is changing in our industry every month and year. How do you feel you’re adapting to these changes so far?

I try to remain stoic in the face of all of this. The trick is being able to evolve naturally with the business while not being so set in your ways that you become a dinosaur. I see lots of dinosaurs right now who are getting left behind. Stick to your guns and do what’s right, but also be open to change. Be fluid. I should write a book.

What’s the best bottle of wine you’ve had recently?

That’s a relatively difficult question to answer, because I drink a lot of different kinds of wine and “best” is always best discussed in context. So I’ll give you two.

1. Subject To Change “Moon Juice”. This is a carbonic light red wine from Mendocino County California. Blend of Syrah and Zinfandel grapes. Spicy and smoky. Should be served chilled. Just a great iteration of “new school” California wine.

2. Oddero Barolo Nebbiolo 2014. Toes the line between classic and modern styles. Great structure and purity. Regal, old-world wine that won’t break the bank (which can be hard to find in Barolo). For when you need something a bit more serious.

Please allow me to rant (I just had a cup of coffee and need to get some things off my chest). San Francisco is a funny town right now. So many places are opening and closing.., it seems like you’re either part of a very talented and successful restaurant group (read: big money), or a total amateur with a trust fund (or a loan) and you’ll be out of business in six months. It’s like Capitalism on steroids out here. There’s no middle class.

I’m an excellent home cook, and I like a fancy glass of wine with my dinner on occasion, so when I go try a new restaurant and leave thinking I could have stayed home in my pajamas and had a nicer meal and saved myself $150, it’s a little deflating. We don’t explore soooo much new stuff in SF because you can get burned by mediocre food and exorbitant checks here very easily. Price markups are insane because the real estate market is so out of whack. Plus I often don’t have the patience to or foresight to play the whole reservation game a month in advance, or wait in line for 3 hours that it takes to eat at the super new and hyped places. That shit’s exhausting. Buyer beware is in full effect.

A lot of the new small restaurants I see opening have absolutely no atmosphere as if it’s an afterthought. I greatly respect entrepreneurs and people who take chances, but restaurants are more than just a place to eat and Instagram your food, ya know? Are you prepared to do something about the soul-crushing decibel levels in your place? If not, maybe you’re in the wrong business. Would it hurt you to hang some plants or paintings on the wall? Come on. Nevertheless, these places are rammed full of people with more money than taste eating for sport. Should I go on?

So yeah we’re pretty low-key about dining in SF, and tend to be much more adventurous when we’re out of town. Plenty of places here do actually live up to the hype though, so I don’t mean to give the impression that it’s a bad place to dine out. SF is undeniably one of the best places to eat in America – you just have to choose your places wisely. If you find yourself in town, a few place we’ve liked recently that I can recommend: Liholiho Yacht Club is excellent. Just had a very nice meal at Ungrafted (new in the Dogpatch neighborhood). Rich Table and The Progress are super solid. I’m not giving up any of my reliable neighborhood gems sorry!

Again, thank you for the mix! It’s time to open a bottle of red and enjoy it!

Butane The Jaded Raver EP is out on Extrasketch on 17th May 2019. Pre-order/buy HERE