Get in the Groove: The Road to REFORM 2021 Mix Series 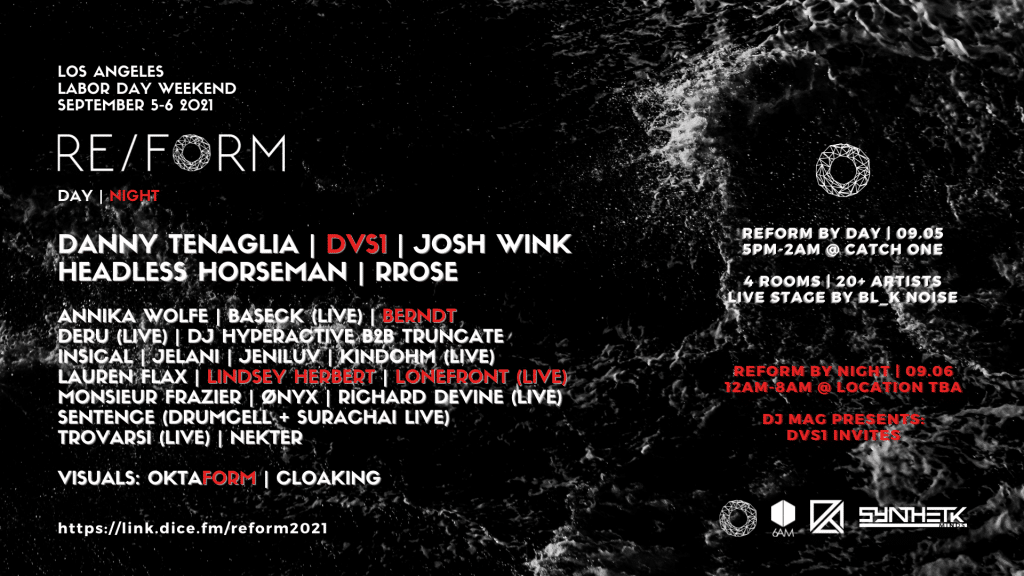 Get in the Groove: The Road to REFORM 2021 Mix Series

REFORM will be taking over the bustling and historic bi-level Catch One venue with a 4-room House + Techno lineup on Sunday, September 5, 2021. Catch One serves as one of LA’s premiere multi-purpose venues, making it an ideal space for REFORM to host 20+ Techno, House and Experimental artists across four rooms. Catch exclusive mixes from techno artists Ønyx, Insical, Lonefront, Berndt and Jelani who will all be playing at this year’s REFORM 2021.

Engineer, composer, producer, and DJ, Insical has a mysterious background. He hails from the distant outdoor raves of Portugal, where he grew up until he was 19 years old. Insical spent six years studying and absorbing all the electronic music culture he could to perfect his craft from the basements and clubs of London. His work includes collaborations with several artists such as Rabbit in the Moon and Gunslinger, and his track “Rift” was featured by Techno heavyweights Charlotte de Witte and Enrico Sagiuliano during a live-streamed set in Ghent.

Ønyx is a young Los-Angeles-based artist originating from French and Middle Eastern roots. When words have failed to express what needs to be said, music has been her solace. Ønyx explores duality by combining the mediums of audio and visual experience into one identity. Catch her playing a b2b with Insical during REFORM by Day.

From DC to Los Angeles, Jelani DJs and produces Warehouse Techno and Electronic Grooves. Diving deep in the modular synthesis world, Jelani uses his eurorack system as his main instrument of choice and seeks to merge the classic Detroit Techno with today’s modern sound.

With a penchant for rhythm, Jordan Berndt has been obsessed with percussion from an early age. Originally from a small town in North Dakota, Jordan began making beats in his teens and took up DJing shortly after. Berndt, as he’s known, has a dance floor-first mindset and brings a certain smoothness that seems to fit in anywhere. In 2015 he co-founded Kajunga Records with Cloudy Kid, Private Guy, and Ryote. Together they’ve been releasing music and throwing one-off parties around the Minneapolis area ever since.

Ross Hutchens aka Lonefront is a Minneapolis based producer and live PA. Originally from the East Bay, Hutchens drew on influences from the Hyphy movement and breakdown-filled metal music before relocating to the Midwest where he was later introduced to techno at DVS1’s Hush parties. Recent works include Gradient Descent (Self-Release), Combined Path (RWAVER FILE WWWRECORDS), and United 4 Equity’s Melt the Pot compilation.