Gesaffelstein’s official site has gone offline as of this morning, and in place a 63 day countdown begins. After a memorably dark and intense performance at Coachella for his last live show for the Aleph album tour, the prince of techno and mastermind remained silent following the release of “Conquistador,” a collaborative piece with Jean-Michel Jarre. “Conquistador” was released as a single the day after Weekend 2 came to a close.

Notorious for his mind-blowing and meticulously curated visual shows depicting black and white scenes reminiscent of pages in art history books, Gesaffelstein is no stranger to orchestrating music that dwells upon visceral fascinations from distant and dark corners of the mind. His music is strangely pure in form and execution, yet it elicits sensuously hedonistic tendencies that remain silent amidst calculative consciousness. Gesaffelstein has consistently played for Hard Events in Southern California and has risen to the top ranks, headlining Hard Day of the Dead and most recently Coachella. 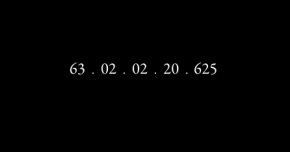 What will happen as the fated day of September 11 approaches? We may be hopeful that a new album is in the works or perhaps an opening of a new era by Mike Levy.